The Sonny Weems, 23, and Walter Sharpe, 23, eras are over in Denver before they ever really began. The Nuggets traded Weems and Sharpe to the Milwaukee Bucks for reserve power forward and eight-year NBA veteran Malik Allen, 31. The trade was originally reported by Nova Fantasy Sports this morning, but didn't surface on more credible media outlets until the Denver Post's Benjamin Hochman reported it this afternoon.

Weems will probably be best remembered during his time in Denver for being J.R. Smith's designated passer in the 2009 NBA Slam Dunk Contest and for his choreographed pre-game rituals with Smith and Renaldo Balkman ... while typically wearing a suit.

Malik Allen can be best remembered, at least by me, for not being Malik Rose.

Let's break down the rest of this trade after the jump.

It looks like the Bucks will most likely waive Weems so that they can re-sign restricted free agent point guard Ramon Sessions to their full MLE. From SB Nation's Bucks blog: Brew Hoop:

... the Bucks are on the verge of trading Malik Allen and his $1.3 million expiring contract to Denver for second-year guard Sonny Weems, who would be owed just $175k if waived immediately.

(It) would be a no-brainer for the Bucks, as Allen doesn't provide anything of value at this point and the Bucks would be able to save a little over $1.1 million by converting Allen's contract into a smaller, partially guaranteed deal.

I'd probably do this deal regardless of the Sessions situation, but it's worth noting that this move alone would clear enough room to re-sign Sessions for the MLE without going over the 09/10 tax. That begs the question of whether the Bucks really are preparing themselves financially so they can match an MLE deal for Sessions, or whether they're simply trying to scare other teams off by showing they've got the cash to do a deal.

Denver acquired Weems (39th overall pick) in a draft day trade with the Chicago Bulls for a 2009 2nd Round Pick. That pick wound up in Portland as part of a three team deal and turned into the 55th pick in this year's draft where Portland selected point guard Patrick Mills out of St. Mary's (remember him?).

The Nuggets acquired Sharpe on July 13 in a trade with the Detoit Pistons that included Arron Afflalo.

Weems was a former college slam dunk champion out of Arkansas and possesses great athleticism. He appeared in just 12 games for the Nuggets last season and averaged 1.6 points on 32% shooting (8-25). Weems was known more as an offensive player ... with limited offensive game. George Karl prefers all-around players and guys who are willing to work on the defensive end. The writing was on the wall for Weems when Karl gave this quote to the Denver Post's Chris Dempsey recently.

"Sonny is an athletic player that's got to learn how to play basketball," Nuggets coach George Karl said. "At times it looks like he's taking that step, and then at times it doesn't look like he's taking that step. He has 10 days here at summer league. He's going to have to figure out his niche. He's got the talent to play in the league. The question will be: Does he have the mind to play in the league?"

In 21 games  in the D-League last season Weems averaged 20.5 points and 4.5 rebounds while leading the 14'ers to the D-League title. 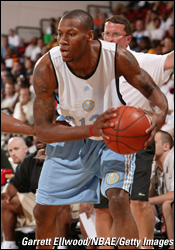 www.nba.com
Sonny Weems never really got out of that Summer League uniform.

If Sonny was going to make the rotation for the Nuggets then it was going to have to be because of his effort on the defensive end. Dempsey's article mentions that Weems had been working closely with Denver assistant Stacey "Plasticman" Augmon to improve his defense, but the Nuggets were not willing to wait on Weems.  Apparently Sonny's niche with the Nuggets was as a trade chip.

Allen exercised his $1.3 million player option for the upcoming 2009-10 season and will be a free agent after the season.

Allen came into the league during the 2001-02 season as a free agent with the Miami Heat, after going undrafted in the 2000 draft. He played his college ball at Villanova and got his first crack at professional basketball with the ABA's San Diego Wildfire.

The 2000 NBA Drafted featured top pick Kenyon Martin and is widely considered one of the worst draft's in NBA history. Notable players selected in the first round include: K-Mart, Mike Miller, Jamal Crawford, Joel Przybilla, Hedo Turkoglu, Quentin Richardson, Jamaal Magloire, and DeShawn Stevenson. And in the second round there were three notable role players: Eddie House, Eduardo Najera, and Michael Redd. Not a lot of superstars there.

After Allen broke into the league with the Miami Heat, like Chris Andersen, he'd remain an NBA player ... although he'd take on journeyman status.

Allen played three seasons with the Miami Heat (2001-2004) before being traded after appearing in just 14 games in his fouth season to the Charlotte Bobcats during the '04-05 season. After the '04-05 season Allen signed with the Chicago Bulls and played out his two-year deal. From there he signed with the New Jersey Nets before the 2007-08 season. Allen appeared in 48 games for the Nets before they shipped him off to Dallas in the Jason Kidd trade. Allen appeared in 25 games for the Mavericks, but left the team after the season to sign with the Milwaukee Bucks for the 2008-09 season.

Now Allen is entering his 9th NBA season with his 7th NBA team ... our Denver Nuggets. Allen does possess an expiring contract for $1.3 million and given his history ... I'm not going to rule out that he could be on the move yet again before the season is over. 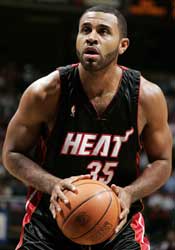 A look at Malik Allen in his "better days."

How does one become an NBA journeyman?

Things actually looked promising for Allen in the 2002-03 season when he was a member of the Heat. He appeared in 80 games and started in 73 of them alongside Brian Grant. Allen averaged 29 minutes a night and produced his career-high in points at 9.6 and rebounds at 5.3 per night.

But the Heat had other plans. After the season they added Udonis Haslem and Lamar Odom to bolster their front line and Malik paid the price. In the 2003-04 season Allen's playing time was cut from 80 games to 45 games and he only started in 6 of those contests. His minutes were cut from 29 a game to 13.7 minutes a night.

Allen would never appear in more than 60 games after his one promising season in Miami.

You can see from the table above that Allen's number are down across the board from last season compared to his career averages. Allen appeared in 49 games for the Bucks, but played a very minor role with the team.

What will Allen's role be with the Nuggets?

Denver has been looking for big man insurance this offseason and flirted with at least Channing Frye in free agency, offering him a two-year $4.14 million deal, that Frye rejected in favor of the same deal with his hometown Phoenix Suns. Allen and Frye are at two pretty different points in their careers and each player sort of gives off a different message.

I'm not convinced that Allen will be with the Nuggets for the duration of the season, but I could be wrong. He will provide Denver with some veteran post presence and more insurance if Steven Hunter is unable to play this season. But Allen could also be packaged with Steven Hunter's expiring deal giving the Nuggets roughly $5 million in outgoing salary to go along with their $8.7 million trade exception that expires on November 3rd ... theoretically meaning Denver could absorb a salary of $13.7 million or less ... theoretically!

As I have mentioned previously, the Nuggets don't really have a lot of playing time to offer a fourth big man. There are 96 minutes between the Power Forward and Center positions in a given game. Nene and Kenyon Martin will probably average between 30-35 minutes a night each. Let's say they average 32 minutes each, that adds up to 64 minutes and leaves 32 minutes available. Chris Andersen will probably average between 20-25 minutes a night. Let's say he averages 20 minutes a night, that leaves 12 available minutes. Denver can split those minutes between guys like; Renaldo Balkman and Malik Allen.

We know Karl hates to play guys in spot minutes and the math above does not take into account unconventional lineups that Karl loves to throw out there during the regular season. The reason I mention this is because it was probably a little irrational for me to think that Denver would be able to bring in a young big like Channing Frye or Brandon Bass who would command at least 15 to 25 minutes a night. The roster is not done forming yet, heck training camp hasn't even started, but we do one more now.

The Sonny Weems era is over after just one season. The question now is how long will the Malik Allen one last?