The battle for the Nuggets backup point guard will be very interesting this offseason. We know A.C. filled in that role last season, but should Denver bring him back once again? It's a popular topic right now among fans, so let's discuss it.

Experience: Entering his 11th NBA season in 2009-10. A.C. appeared in 78 regular season games last season for the Nuggets and started five of those contests. At 34 years-old Carter showed few signs of slowing down last season, but it was apparent that he has lost a step and that's why it was important for the Nuggets to find a replacement for A.C. and Denver found a candidate in Ty Lawson.

Overview of 2008-09 season: Anthony Carter did a lot of good things as the Nuggets backup point guard. He played the role almost to perfection. There are reasons why A.C. is not a starter in the NBA and his knack for turning the ball over at inopportune times and lack of a better offensive game are exactly why A.C. comes off the bench. But don't be mistaken ... A.C. is a very adequate backup in the NBA and did all he was asked to do last season ... whether it was to spell Chauncey Billups or the impossible task of covering guys like Paul Pierce and Kobe Bryant.

When talking about A.C. it is key to realize that he was a huge success given his salary, but that doesn't mean Denver should not be looking to upgrade the position or that the mistakes A.C. made can be chalked up to, "well he's cheap so we can live with that miscue." As I discussed recently Denver could be getting the same headaches on the floor while paying a guy like Antonio Daniels $6.6 million per season to commit them.

But when A.C. is in the game the Nuggets offense picks up the pace as he looks to push the ball as much as he can and he will get his teammates the ball. Carter probably had some of his best chemistry with Linas Kleiza while running the fastbreak. 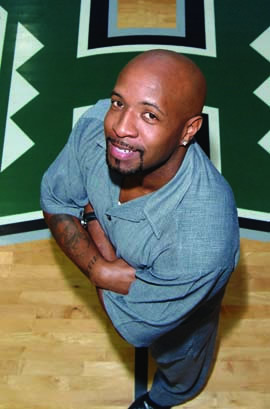 Positives / What he brings: Look at the number above; while none of them are eye popping, they are all above his career averages (yikes on the turnover stat). A.C. plays every game like it is his last and that is a great attribute in any professional athlete and all you can ask really. Carter does not dominate the ball when he is on the floor and realizes his role with the team is to be a distributor and minute eater and is not to be a scoring threat ... he only averaged 4.9 shots per game and will take the shot if he's open in an attempt to keep the opposition on their toes.

Carter loves to push the pace and can create easy buckets for his teammates on the break and is a very willing passer and a creative one (more on that in the negative section.) Carter is a nice veteran voice in the locker room and seems to approach the game in a very professional way.

He will crash the boards and can sneak in for some unsuspecting offensive rebounds as he will go in among the trees. A.C. is also willing to take the ball inside and if he's given a clear path, he will go for the layup as opposed to dribbling through the paint like some point guards ... cough Steve ... cough Blake.

Negatives / What needs to improve: Carter is not a major scoring threat and has never finished a season in Denver shooting above 46% from the field or above 35% from beyond the 3-point arc. At this point ... what you see is what you get with A.C. He's a veteran guy and at this point in his career the only thing you can really expect is for Carter to start slowing down.

A.C. is such a willing passer that he'll take chances with the ball that he shouldn't and is prone to easy turnovers. George Karl also looks to A.C. to cover guys that he honestly has no chance to defend and while this isn't A.C.'s fault there are some that believe if he's brought back then Karl will again choose to use him in ways he should not.

Outlook for 2009-10 season: After reading that the Indiana Pacers have interest in A.C. I'm a bit worried that Denver may not hold all the cards for Carter's services. A.C. has stated that he wants to play in Denver again and he'd be great competition for Ty Lawson along with providing another veteran voice for the young point guard.

I'm not sure why A.C. would be willing to play for the minimum again when his role with the Nuggets is obviously one that George Karl values, but perhaps that is a sacrifice that A.C. is willing to make to play for a team contending for the title and to play a key role with that team.

I don't think Ty Lawson should be handed the reigns as the primary backup in Denver just because he was drafted 18th overall and it doesn't sound like the coaching staff feels that way either. But with that said I think that Lawson has a great chance to eventually steal the backup duties this season from whomever the Nuggets bring in to backup Billups. It'd be nice to have A.C. back for the $1.3 million instead of a more expensive guy so that when Lawson does take the job the Nuggets are not wasting bigger bucks on the bench.

Now ask yourself this question: Who would be a good veteran that can handle the pressure that the playoffs will bring and whom can Denver bring in that wont stunt the growth of Ty Lawson?

Anthony Carter sounds like a pretty good option to me.