Rounding out the small forwards on the Nuggets roster is Renaldo Balkman aka Kook aka The Crime Stopper. Balkman never had a clearly defined role with the Nuggets last season and was thrust into the lineup very sporadically. The Nuggets must decide who is best equipped to backup Carmelo Anthony next season and Balkman will make his case for that role.

Follow the jump to read more about Renaldo Balkman's role with the team in the upcoming 2009-10 season ...

Contract status: Under contract for next season for $2.03 million ... the following season (2010-11) Balkman is scheduled to become a restricted free agent if Denver extends him the $2.9 million qualifying offer.

Overview of 2008-09 season: It was very difficult to see what Balkman could do over the entire season because he only appeared in 53 games (starting 10 of those). He was never fully in George Karl's rotation, but did provide the Nuggets with some quality starts in place of injured Kenyon Martin.

Averaged 14.7 minutes a game … has only averaged 15 mpg for his career.

Positive / What he brings: It appears to me that 'Naldo is the consummate teammate. His teammates enjoy having him around and when he had good games there was never a shortage of positive postgame chatter from his teammates. Balkman has an elaborate and goofy tipoff ritual where he gives each teammate a greeting, greets press row, and concludes things with a chest bump with J.R. Smith or Sonny Weems. His long dreadlocks and sleepy face invite the fans to make him a crowd favorite, but more than anything his leg tattoos "Hustle Harder" embody the type of player he is. Balkman is the modern day Dennis Rodman in my view. The guy is a pest the entire length of the floor. He'll try to bother the ball in the backcourt, he fronts entry passes in the post, goes for steals on entry passes into the post with regularity, glues himself to his man, and is always going to the glass on shot attempts on both sides of the floor.

Balkman recorded 15+ minutes of playing time in 26 games in the 2008-09 season with Denver and the Nuggets went 21-5 in those contests.


Balkman's stats in those 26 games:

What are we to make of these 26 games? Was it just a flash in the pan type of thing or are fans correct in thinking that when Balkman plays that good things happen? I'm sort of in the latter part of this question. When you have a guy on the floor giving his all I think more good is going to happen than not. The addition of Balkman made sense when Denver lost Eduardo Najera to the New Jersey Nets (27 games and 2.9 points for Eddie last season by the way), but the way George Karl yanked around his playing time confused me as much as the horrible ending of Will Smith's I Am Legend (don't get me started).

What 'Naldo lacks in talent he more than makes up for in heart. 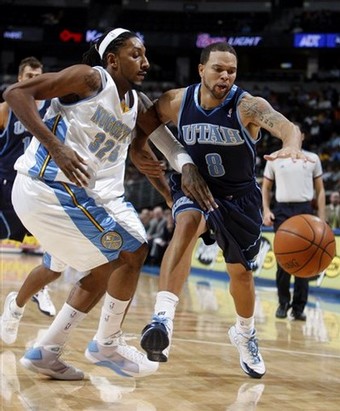 Negative / What needs to improve: I want to know why Balkman didn't see the rotation more and I don't buy it was because he didn't have a full training camp in Denver or that he occationally lets in an open layup. I did hear some rumors that Balkman missed quite a few practices, but can't find anything about it in the land of the internet. The fact remains that Denver had a 21-5 record in games where Balkman played 15+ minutes ... so he must be doing something right.

Balkman does lack the ability to create his own shot and his jumper isn't the most consistent thing around, but he doesn't even bother looking for it (outside of garbage time) because he knows his role. Balkman showed he has the ability to finish around the rim, but his lack of size in the paint has been a bit of an issue as he'll blow a layup or get a shot blocked from time-to-time as he plays the game with a 7-footers mentality. I don't think there is a ton of upside left with Balkman as he'll be 25 years-old next month, but that's not to say he can't improve his jumper a bit, improve his ball handling, and get more comfortable in Denver's system.

Outlook for 2009-10 season: I read somewhere in the blogosphere that Denver fans only root for Balkman because he's sort of a character. I don't think this is true at all. Again, it's easy to support a guy who is out there giving a tremendous effort and actually having an effect on the game.

There has been a lot of talk on this blog and elsewhere about Balkman perhaps being ready and able to take over Linas Kleiza's role as Carmelo Anthony's backup should LK not be back with the team next season. LK and Balkman couldn't be more different. LK the offensive minded forward with shooting range and Balkman the hustling player who creates his offense on the offensive glass and works hard on defense.

Should the Nuggets hand the backup duties to Balkman? As much as I appreciate Renaldo's game I don't quite see him being an upgrade for the Nuggets. It's funny how I'll ask why he didn't get more playing time and then all the sudden say he isn't the answer to backup Melo, but this team is gunning for a championship and cannot afford to take a big gamble by giving Balkman all the backup duties behind Melo.

Balkman represents yet another Nuggets player who offers one great thing (hustle), but lacks a complete game. I know role players are just that because they are typically flawed, but it sure does seem like Denver has a lot of one trick ponies. The best thing the Nuggets could do is to get the NBA to allow hockey-like subsitutions on the fly so that Balkman could enter the game for LK on every defensive possession. Seeing as how I'm more likely to win Powerball than to see those type of baseless rules get incorporated into the League ... the Nuggets must either retain LK or bring somebody in to offer some competition for Balkman as Carmelo's backup.