Full breakdown on L.K. after the jump.

Contract status: Will become a Restricted Free-Agent after the Nuggets offer LK his $2.7 million qualifying offer. Nuggets can negotiate a contract with Kleiza and will have 7 days to match any offer he signs with another team (unless he signs with a European team … but if that happens Denver retains his rights when/if he rejoins the NBA.)

Overview of 2008-09 season: The best word that describes LK: tantalizing … or maybe frustrating … definitely inconsistent … LK’s game changes like the Colorado weather (and that’s not a good thing … we just had a 55 degree day filled with rain sandwiched in-between two beautiful 70 degree days.)

Averaged 22.2 minutes a game … played in a career-high 82 games and started 7 of those contests. Minutes dipped slightly from 23.9 mpg last season. 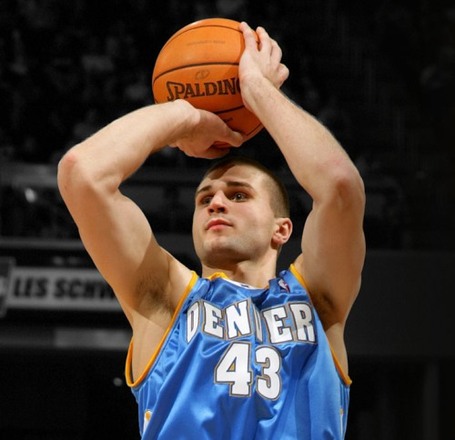 Where will LK shoot rock next season?

Positives / What he brings: LK will start the 2009-10 campaign at just 24 years-old. He’ll be entering just his 5th season in the NBA next year and still has a lot of upside. Kleiza is a scoring threat off the bench and a fearless one. Linas showed major guts in Game 6 when he appeared to be the only player aside from J.R. Smith willing to shoot the ball and take it to the rack. His mixture of size and shooting range poses a lot of problems for teams. Kleiza is pretty quick off his drives and loves to get out and run. LK would be a perfect player for the New York Knicks’ Mike D’Antoni. He likes to shoot rock the three pointer and can finish on the fastbreak, which is exactly what D’Antoni’s system is built for.

Some interesting stats on LK from this past season:

Negatives / What needs to improve: When I looked over the numbers above, the thing that jumped out most to me was that Kleiza only produced 12 total regular season games where he scored double-figures and recorded 6+ rebounds and the guy was averaging 22 minutes a game and played in all 82 contests.

Kleiza has yet to develop a mid-range game or shown the ability to finish with his left hand off drives (or go left when driving the ball.) This has to change in order for LK to make a breakthrough as a real scoring threat in the League. I am not ready to say that Kleiza regressed last season, but I’m more than willing to say he treaded water and at just 24 years-old he can’t afford to get by on "promise" and "upside" for much longer.

Kleiza is another guy that has too much shooting range to shoot so poorly from the foul line … a C- is not going to cut it from the charity stripe. When LK gets the ball on offense it seems that his first, second, and third options are to score the ball and that has got to change. Not all players are gifted passers, but there must be some effort made by Linas to create some opportunities for his teammates. The guy averages 0.07 assists in his career and just 0.08 last season. Not everyone has to be a point guard, but adding a touch of diversity to your offensive game will only make you more dangerous when the ball is in your hands.

Defensively: Kleiza is sort of stuck between a rock and a hard place. He’s not laterally sound and has trouble staying in front of quicker forwards. You don’t necessarily have to be quick to guard guys … just ask Larry Bird. Kleiza needs to learn how to take angles better so he’s not forced to reach and commit cheap fouls. Time and again when he guards guys coming off screens he wont fight through and gets burned for easy buckets when he goes around screens near the hoop. Defense can be improved through effort and I’d love to see more effort out of LK in his all around game.

Outlook for 2009-10 season: I don’t know what team Kleiza is going to end up playing for next season. I do know that rumors surfaced that Denver was close to dealing LK to the Knicks during the season for David Lee and those rumors were said to have been squashed by George Karl himself. Having the coach on your side is never a bad thing, especially since the coach and owner have a good relationship. I wouldn’t be surprised to see Denver retain LK and I wouldn’t be surprised if another team came in and offered Kleiza enough money to scare Denver off.

Look, Denver is going to pay the luxury tax next season no matter what they do. It’s all a matter of how much Stan Kroenke is willing to pay. Remember … for every dollar spent over the cap you must match … so if you are $4 million over you must match the $4 million and pay $8 million.

I don’t think Kleiza’s situation comes down to strictly money issues … I think his situation depends more on if the coaching staff thinks Kleiza has reached his ceiling as a player. The best thing probably for both parties would be for LK to sign the qualifying offer (one-year $2.7 million), which would allow Linas to become an un-restricted free agent next season. But with a potential lockout looming over the league in a couple of seasons … it’d be in the best interest of the players to take whatever deals they can get to try to secure their future.

As far as my take goes … I think it’d be very difficult to watch a 24 year-old four year player walk away without getting anything in return (see Mutombo, Dikembe). The Nuggets might be able to use LK in a sign-and-trade deal if such an option presented itself, as Kleiza is Denver’s biggest wild card. I can’t decide if what we’ve seen out of LK is what we are going to get from here out. His tantalizing skill set still draws me in, so it’s somewhat obvious that I’d feel bittersweet about letting Linas go. I’m just glad I’m not the one making this seemingly crucial decision.