I wanted to spend a little time tossing out some book recommendations for all of you. I'm a pretty big reader and I stick pretty much to sports books and would like to pass along the book Taking Shots by NBA agent Keith Glass from 2007.

In Taking Shots Mr. Glass does just what his cover talks about ... he gives you inside scoop into the life of an NBA agent. In the book are contract negotiations, crazy player stories, and lots of opinion about the state of the current NBA.

There are some great stories in the book about when Keith used to work at legendary UCLA coach John Wooden's basketball camp and how Larry Brown came to be like an older brother to him while living at Glass' parents' house. 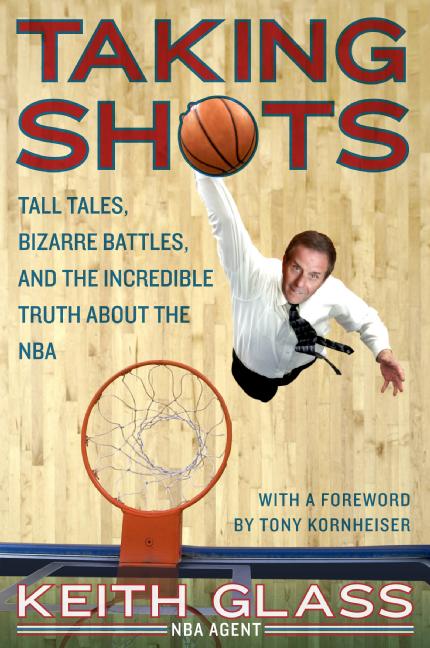 But what I liked most about the book was the (unknown to me at purchase time) Denver Nuggets ties. Glass writes extensively about two former clients who both have Nuggets roots; Mahmoud Abdul-Rauf and Efthimios Rentzias.

Glass goes in-depth about everything Rauf related in the chapter titled Star-Spangled Disaster from pages 131-168. Glass also discusses former Nugget first round pick Rentzias at length in two chapters: The Squeaky Wheel Goes to Greece 169-188 and Putting the Odd in Odyssey 189-208.

Follow the jump to read a couple snippets from the book and to find out more about Rauf and Rentzias ...

Glass was the agent for former Nugget Marcus Liberty. Liberty was drafted by the Nuggets in the 1990 NBA draft 42nd overall (2nd Round). Rauf was selected in that same draft, but he went was taken 3rd overall by the Nuggets and not yet represented by Glass.

While Liberty didn't exactly have a great career in the NBA ... he did introduce Glass to Chris Jackson (Mahmoud Abdul-Rauf) and that is where the book gets interesting. Glass discusses Rauf's transformation from NBA overweight bust to team star and goes into great detail about Rauf's religious beliefs and how they shaped his stance not to stand for the U.S. National Anthem. There is some great insight into the unselfish Rauf and an interesting look at Rauf's first and only big NBA contract negotiation.

...what concerned me the most was that Chris was failing as an NBA player.

Unless we turned this thing around quick, Chris Jackson was about to enter the land of Chris Washburn - the third pick drafted the year before Chris jackson who ended up never playing in the league again. Cue the ominous music here.

The 1992-1993 season saw Chris Jackson go back to the promise that everyone throughout the basketball world envisioned when he left college as a sophomore. He basically exploded. His conditioning and new approach to his job and career were obvious from the outset o fthe season. (p. 136)

He went on an unbelieveable regimen that included a strict diet as well as playing ball roughly six to eight hours every day. The results were astonishing He lost thirty-two pounds, and together pending conversion to the Muslim religion, Chris went to training camp for his third NBA season i the best shape of his life. (p. 135)

Chris was a good one, but at five feet eleven inches tall, he was a "tiny two guard." The fact that I was representing him excused a lot of those problems in my mind, but I knew that the man I would have to go up against to secure a new deal, Bernie Bickerstaff, was at least as clever as I was, and I knew, from having dealt with him in the past, probably more so. (p. 137)

As much as I enjoyed reading about Rauf ... a player that I absolutely loved growing up as a Nuggets fan, I was also very interested to read about Efthimios Rentzias. About all I can remember from my younger years about Rentzias was that Denver drafted some foreign guy and then he never came here to play. (I wont mention the fact that Denver traded back in that 1996 draft and missed out on a chance to select Kobe Bryant ... nope, I wont mention it.)

I was convinced as a kid that Bickerstaff had drafted Rentzias and then he left the team just to destroy my Nuggets on his way out the door. Well, it turns out that Allan Bristow had perhaps more to do with Rentzias never playing for the Nuggets than Bickerstaff ever did, according to Glass.

To quickly recap Keith Glass' tale on Rentzias (a 6'10'' power forward from Greece) ... the New York Knicks promised to draft him 18th overall (with one of their three first round picks) knowing that his European team PAOK of Greece still had him under contract and that perhaps no buyout could be made. The Knicks were set to take him, but a standout big man from Syracuse slipped all the way down to 18 and the Knicks had to draft John Wallace. Surely the Knicks would take Rentzias with their next pick ... nope. New York selected Walter McCarty from Kentucky instead. The Knicks once again had a shot to take Rentzias, but passed at 21 for Dontae' Jones from Mississippi State (not our guy from Duke!)

Glass was devastated because he felt betrayed by the Knicks. In the days leading up to the draft Glass told the Knicks that if for any reason they would not take his guy at 18 that he was going to pull him out of the draft and wait until next year ... the Knicks didn't take him and surprisingly the Nuggets stepped in at 23 and took Rentzias.

Denver didn't seem to mind that he still had two years left on his contract with PAOK and left him overseas. A management change that saw Bickerstaff head to Washington to coach the Bullets allowed Allan Bristow to become the new Nuggets General Manager and he came to the conclusion on Rentzias.

Into the middle of this fiasco, which clearly seemed incapable of getting any worse, stepped Allan Bristow, who immediately proceeded to make things worse.

Allan and I had known each other for some years and had done various little deals. ... I was going to have to deal with him on the Rantzias matter.

Allan indicated that he was going to have to go and check out Efthimios. He plainly was dreading the trip. He did not understand what the fuss was all about. His attitude was, "Damn it, Keith, we drafted this kid in the first round; either he wants to play for us or he doesn't."

Reluctantly, off to Thessaloniki (Greece) he went. Later that week, Scott Skiles (the coach of PAOK and former NBA point guard as well as another Glass client) told me that the game Allan saw was one in which Efthimios played really well. He had twenty-two points and twelve rebounds. Allan called me from a stopover in Athens and said that he was really impressed ... with Scott! "What?"

According to Allan, Efthimios wasn't ready, but he wanted to know if I could arrange for Scott to interview for the head coaching job at Denver after Allan fired Coach Dick Motta. (p. 201-202)

Of course, I was extremely disappointed for Efthimios, but I learned a long time ago that NBA opinions, even based on limited information, are very difficult to change. The most important thing was to keep these opinions confidential, so that Efthimios's value would remain high in the league.

As soon as Allan returned, he immediately told the press that Efthimios was not ready for the league. This basically destroyed any chance the Nuggets had of successfully trading Efthimios.

Overall, in a few short weeks, the Nuggets in general, and Allan specifically, had turned my prize recruit of 1996 into a pile of manure. (p. 202)

Efthimios would go on to sign a contract with FC Barcelona and would only play limited time with the Philadelphia 76'ers in his lone stint in the NBA during the 2002-03 season. You can read more about him here.

For a Nuggets junkie I ate this stuff up. You don't ever really come across books discussing the Nuggets and I really enjoyed getting some insight into Rauf ... a player that I liked watching, but never knew much about and Rentzias ... a player I never knew why Denver drafted in the first place.

So, if you are looking to do some easy reading this summer ... I highly recommend this book for a quick, easy, and fun NBA read. You can find it cheap all over the internet, only $14.04 on Amazon. Plus you'll get some great insight into the Denver Nuggets and the rest of the NBA.