One of the biggest questions facing the Denver Nuggets this offseason is whether or not Chris "Birdman" Andersen will be brought back. Birdman is an unrestricted free agent after playing last season on a one-year deal for $797,581.

Since Andersen was on just a one-year deal in his first season back in Denver, the Nuggets do not own the Birdman's Larry Bird Rights. So, in order to bring Andersen back the Nuggets will have to dip into their Mid-Level Exception money to resign the cult figure shot blocker.

Experience: Entering his 8th NBA season in 2009-10. Andersen has only appeared in 108 of 328 regular season games from 2005-2009 (four NBA seasons) due to his drug suspension. So, you can say that Birdman has fairly fresh legs for a 31 year-old big man. You could also say that he probably did some untold damage to his body with whatever it was that he was suspended for.

Overview of 2008-09 season: Sometimes you really hit the jackpot with a player and the Nuggets gamble on Andersen really paid off last season. One of the biggest storylines of the Nuggets offseason heading into the 2008-09 season: Who is going to replace Marcus Camby?

There were not a lot of people who were saying Chris Andersen's name to answer that question. But Andersen, like he has done throughout his career, put in the necessary work and had the proper conditioning and energy to be the Nuggets most effective big man off the bench and at times the Nuggets best big man period.

Andersen showed that he was ready to pick up where he left on from his 2004-05 season with the New Orleans Hornets (his last full NBA season). Just check the numbers:

Andersen's numbers do not blow you away, but he is a high quality big man off the bench and could probably start for some teams in the league. His size and health proved to be major bonuses for the Nuggets.

It's always a dangerous game to throw money at a guy coming off a big season in a contract year because there is the worry that the player may not try as hard since he now has security. I don't have that fear with Andersen because he doesn't know how to play the game without giving his all.

Positives / What he brings: A very marketable player. Birdman t-shirts went flying off the shelves after they were introduced at the Pepsi Center and other area outlets like DeRailed Ink. Being marketable is important in the NBA and the reason Andersen is so marketable is because of the way he plays the game. Fans in Denver have endeared themselves to Andersen once again.

Birdman is a human highlight reel. He can block shots in spectacular fashion and throw down dunks with the best of them. Chris is another guy who knows his role with the team and will rarely step outside of that role for personal glory.

The guy is a rebounding machine on both ends of the floor. He may not grab every rebound, but you know he's going to be in the mix on every possession. And while the Bird is not a major offensive weapon, his game is a bit underrated. He showed time and again that he's a capable finisher off the dribble and can get his shot off in traffic. Now he doesn't often look for his jumper or to drive the ball, but he has had success when does. Does that mean he is a more complete player than people think? Yes and no. He has a lot of room for improvement and at 31 years-old we could actually see his offensive game improve a bit as he'll be more comfortable next season in the Nuggets system and with his teammates.

Negatives / What needs to improve: Become more of an offensive threat. As I mentioned above ... Andersen has a decent stroke on his jumper and has shown some ability to get to the rim off the dribble. The problem with the Nuggets big men over the past few seasons has been the consistency to hit jump shots and be able to pull the defense out of the paint. I expect Andersen (if he is re-signed) to come to camp with a more reliable jumper and with more overall confidence in his offensive game. A key to hitting shots is having the confidence to take the shot in the first place and Birdman needs to find more confidence in his own skill set.

Everyone loves a good shot block from the Bird. But Chris needs to do a little less shot blocking and a bit more staying home defensively. I would love to track this kind of stat: Say Andersen blocks 6 shots in a game ... how many of those shots wind up being baskets anyway (off a loose ball rebound or if the ball goes out of bounds.) The crowd pleasing shot block can lift a team and an arena, but I believe Andersen can do a bit better of a job by tipping blocks to teammates or to himself and maybe not going for every shot attempt. Teams will feast off Andersen leaving the paint and leaving his vacated area open for offensive rebounds ... this is basically how Pau Gasol makes a living on the offensive glass. It seems pretty ridiculous for me to lobby for the Bird to stay in the nest a bit more, but Denver was 2-1 against the Lakers when Bird blocked 2 or less shots and 0-3 when he blocked 3+ shots. That doesn't mean that Bird is to blame for the losses at all, but it is an interesting stat. 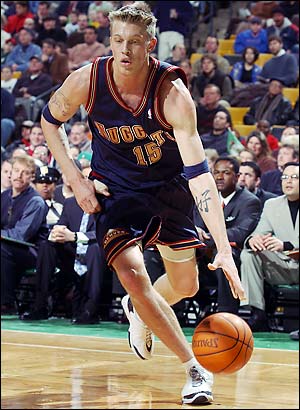 Outlook for 2009-10 season: The Nuggets cannot afford to let the Bird fly away. He has stated he wants to play here and the Nuggets need him. Quality big men are extremely difficult to come by and re-signing the Bird will not break the bank. I don't see the Nuggets having to spend more than $3-$4 million per season on Andersen and that is a very reasonable price.

There has to be a little bit of concern from NBA teams about a possible relapse from Andersen and unfortunately that will probably play a small role in keeping his asking price down. I hope that never happens, but it is in the back of at least my mind and that makes me think it will be a small factor as the free agency period open on July 1, 2009.

The Nuggets took a gamble on Andersen when they signed him last season and Stan Kroenke should let it ride now and lock up the Birdman for an extended stay in Colorado.