With the closing of the season each player goes through an exit interview process with the coaching staff … so I figured I would do the same here on Pickaxe. We’ll be going through the Nuggets entire roster. We’re going to start at the Nuggets most popular spot … small forward.

So, let’s get to it … I’ll be discussing small forward: Carmelo Anthony first. We'll go over each player’s contract status, what they bring on the floor, what they lacked, and what their role should be with the team going forward.


Some quick lingo that you’ll see in these player profiles:

Player Option: Player can opt out of final year of contract to become a Free Agent.
Team Option: The team can choose to not pick up the final year of a player’s contract and thus make them a free agent.
Qualifying Offer: "In order to make their free agent a restricted free agent, a team must submit a qualifying offer to the player by June 30. The qualifying offer ensures that the team does not gain the right of first refusal without also offering a contract themselves." –NBA Salary Cap FAQ

For a great explanation on how Restricted Free Agency works see this link and go to question 36. This will come in handy because both Linas Kleiza and Johan Petro are RFAs. You can also read up on all sorts of other Salary Cap FAQs by clicking this link. Enjoy … some interesting stuff.

Contract Status: Melo is under contract for 3 more seasons with Denver (Melo’s final season is a player option one that he can choose to opt out of) and is owed roughly $51.5 million from the Nuggets. 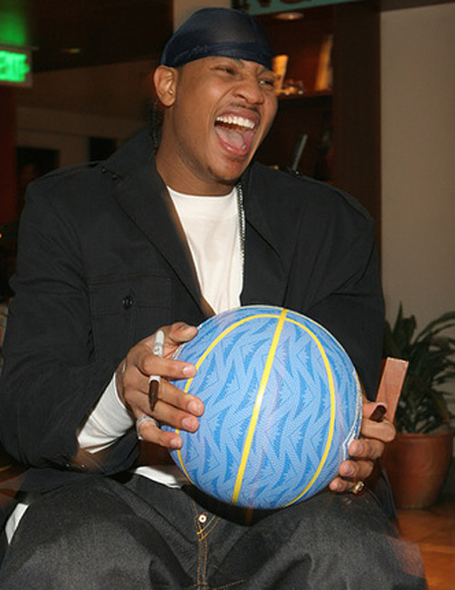 Melo is often at his best when he's
showing off his smile.

66 regular season games – 2nd lowest of his career. Lowest came during the brawl in New York season (2006-07) when Melo appeared in just 65 games.


Positives / What he brings: Carmelo is among the best scorers in the league. He can get points in all facets of the game. Melo has made a career setting up high on the elbow on the offensive end and going to work from there. However, Melo is most effective when he’s attacking from the top of the key as he has multiple options from that spot on the floor. He’s vastly improved his three-point shooting and is even showing improvement at the free throw line. Melo has shown he can be a surprisingly good passer out of double-teams and has continues to show improvement in his ball handling skills.

In the 2008-09 season Melo’s biggest improvement has been his professionalism. Symbolically, when Melo shaved off his trademark corn-rows his transformation to being all business was complete. Melo’s willingness to share the spotlight on offense and improved focus on the defensive end (especially with defensive rebounding) has helped transform him into a more complete player. Melo is now entering the prime years of his career and his game should take another leap next season.

Negatives / What needs to improve: Melo still has a tendancy to fall out of the limelight. In the first two games of the Western Conference Finals he averaged 36.5 ppg. In the last four games Melo averaged 23 ppg. While 23 ppg is nothing to scoff at, and he may have been a bit more hurt or sick than he led many to believe, there is still a bit of inconsistency in Melo’s game. I’d like to see his decision making continue to improve when he gets doubled by making quicker decisions about how to attack (drive, shoot, or pass). And when Melo does attack he needs to finish plays strong and make his opposition pay at the foul line. Melo must improve his free throw shooting. He’s the star of the team and has one of the sweetest shots in the NBA … shooting just a C+ at the free throw line is not acceptable. Melo missed 97 free throws this season and that number should be significantly less next year as Melo should aim to shoot 85% or better from the charity stripe.

While his defensive focus is better than it has ever been, Anthony must continue his defensive work. As a team Denver must get better with defensive rotations and Melo is no exception. While it’s extrememly tiring to play both ends of the floor, I’ll use the "Well if Michael Jordan did it …" argument here. Superstars are called just that for a reason and I think Melo is getting ever so close to entering that conversation. 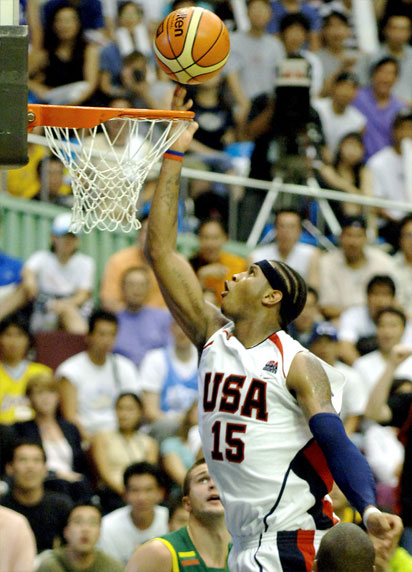 Outlook for the 2009-10 season: Melo wont be logging heavy basketball minutes this offseason with Team USA, so he should be nice and rested come November. A key stat: Melo logged his fewest regular season minutes of his career this past season with just 2,277 minutes played, but the 16 post-season games evened that out.

Expect to see the best version of Carmelo Anthony yet. At 25 years-old we will see his game grow even more as he enters his 7th NBA season. Melo is entering the prime of his career and now that he has tasted playoff success he will be even hungrier to take yet another step.

Not a bad year though ... a gold medal at the Olympics and advancing to within two games of the NBA Finals ... just 6 wins away from a championship.