This past season we were treated to seeing the best version of Nenê to date. Not only did his numbers improve across the board, but he managed to stay relatively healthy all season and appeared in 77 regular season games.

Nenê was vocal during the season about wanting more help inside and wearing down with major minutes. He also spoke about how he was more of a natural power forward and not a center. But all-in-all the Big Brazilian had a tremendous season and looks to be back on track in his career path.

Experience: Entering his 8th NBA season in 2009-10. Crazy to think Nenê has been with the team this long.

Contract status: Nenê has 3 years and $33.4 million+ left on his 6-year $60 million deal. Sort of a funny side story ... I met Nenê once during his rookie season and told him he could become a Karl Malone type player ... in the ESPN story I linked to his 6 year contract he talks about being a Malone type player ... did he remember this from me? Ha ha ... NO CHANCE!

Overview of 2008-09 season: Nenê has missed 204 games in his 7-year career. He's appeared in 370 out of 574 career regular season games ... or 64% of them. So, watching him play in 77 games this season and all 16 postseason games was an awesome sight. At 27 years-old entering next season he does have a big injury history, but his mileage is still very low (knees and back). We are now starting to see Nenê's more complete game. He developed a nice jump shot to go along with being able to finish with both hands around the rim and remains a fairly gifted player all around. He has matured quite a bit physically since entering the league and has much more room for improvement in his overall game. 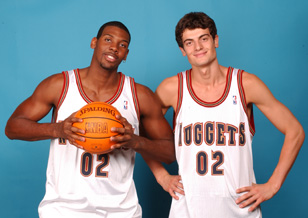 Photo courtesy of NBA.com: Nene and Skita as rookies.

Fouls: 3.6 per game (3.4 for his career) Always important for your big men to remain on the floor and he does a pretty good job of it (most nights).

Rebounds: 7.8 per game (6.6 rpg career) Nenê has always been a good offensive rebounder and playing in the post puts him in position for more opportunities ... something I hated about Marcus Camby hovering around atop the foul line on offense. Nenê grabbed 2.4 offensive boards a game and averaged 2.2 orpg for his career.

Positives / What he brings: Nenê is the lone Nuggets big man (not counting Melo) who can play in the post. He has a pretty good assortment of moves and can finish with both hands and can finish strong when it counts. The Brazilian also has the ability to stretch the floor and make his defenders respect his jump shot ... very important in the NBA to be a multi-dimensional offensive threat. His free throw shooting is also showing consistency and dramatic improvement ... he has gone from a career D charity stripe shooter to a C- in the span of one season. I would love to see things continue to improve at the foul line and Nenê should aim for 75%+ next season from the line. I would also say that Nenê possesses the best shooting touch of any of Denver's big men. The Predator (as I call him because of his hair style) can also hit the boards. His long arms and huge hands coupled with tremendous lift allow Nenê to be a monster rebounder. When his effort on the glass is there he will put up double-digit nights on the boards.

-Denver went 14-6 when Nenê posted a double-double last season and 2-0 when he did so in the playoffs.

-The Nuggets went 5-1 during the regular season when Nenê led the team in scoring and 2-0 in the playoffs.

Negatives / What needs to improve: The thing that stuck out to me most about Nenê's game was his complaining to the refs. As I discussed in a playoff game preview ... Nenê needs to compose himself better and learn to pick his spots with the officials. Right now he is the Boy Who Cried Wolf and it'd be nice to see that change next season so when he does complain that he has a leg to stand on.

Nenê is also a very unselfish player, almost to a fault. Nenê averaged 9.2 shots per game last season on a team that is pretty loaded with offensive talent. His 9.2 shot attempts ranked him 4th on the Nuggets in that category behind Melo, Chauncey Billups, and Kenyon Martin. And just ahead of bench players J.R. Smith (9.1) and Linas Kleiza (7.9). Compare Nenê's attempts of 9.2 to Dwight Howard's 12.4 ... Howard plays on a team that, like the Nuggets, is loaded offensively, but he finds a way to get his shots. Nenê must do the same moving forward.

I will also note that there was a passiveness to Nenê's game that cannot be there for a big man. His interior passing is pretty nice, but there is (at least in the playoffs and at the tail end of the season) times when Nenê will pass the ball instead of taking it hard to the rim. There are also instances where he will not finish strong at the rim and that is puts his game and the team at a disadvantage.

Defensively, Nenê is a strong and able defender who is known to pick up ticky-tack fouls. His floor IQ has picked up quite a bit from where he was as a rookie and you can tell Nenê has worked hard to improve his all around game, but there is still quite a bit of room for improvement on the defensive end. Nenê is rarely going to be the longer guy defensively and probably is closer to 6'9'' than his listed height of 6'11'' and that puts him at a disadvantage right away. But Nenê has tremendous heart and can play with a fiery passion on defense if he feels involved in the game on the offensive end. It will be important for Nenê to show more growth if the Nuggets are going to battle for the Western Conference championship again next season.

Outlook for 2009-10 season: I'd love to see Nenê continue to work on his post game and his outside shooting. As the Nuggets' lone big threat in the post (at the time of this writing) he will be leaned upon to provide the bulk of the scoring down low again next season. Nenê started to turn some heads this season with his improved play, and if that continues then his 6-year $60 million deal could turn out to be one of the best bargains in basketball. I feel as though the Brazilian should be able to push his game to an all-star level next season and it'll be very interesting to see how he responds to his best overall season as a Denver Nugget. 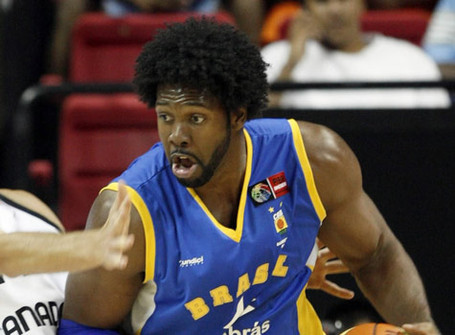 I'd love to see Nene rock an afro next season.