Share All sharing options for: WCF Preview: Nuggets vs. Lakers

"If you are going through hell, keep going." -Winston Churchill

The Denver Nuggets will be on the road for Game 1, for the first time this post-season and their opponent will be the #1 seeded Los Angeles Lakers.

In order to be the best, I believe you have to beat the best. The Lakers represented the Western Conference last season in the NBA Finals and won 65 games this season. There is no doubt that they are the best team in the West this season.

The finals are supposed to be the Cavs vs. the Lakers ... no questions asked. LeBron James vs. Kobe Bryant has the pundits salivating at the mouth. Nothing would be better than to see our Denver Nuggets pull off the upset and defeat the Lakers. And the best part is ... the Nuggets can do it.

Superstars: The bright lights will focus on Kobe Bryant and Carmelo Anthony, as they should. Kobe has had his way with Denver in all four games this season. On the flip side, Melo struggled to find his offense against the Lakers in the regular season.

^ Kobe only had more free throw attempts against 3 teams
^^ Melo's 14.5 ppg equals his lowest against any team this season

While these two stars are looked upon to carry their teams when they need to; both guys have learned to trust and use their teammates. When you talk Lakers you have to be aware of Kobe, Pau Gasol, Lamar Odom, Andrew Bynum, Trevor Ariza, and Derek Fisher. Those guys will be providing the Lakers with much of their offense and each should be considered major scoring threats.

How will the Nuggets matchup and what strategies will they utilize to try to stop these Lakers? Well, George Karl and the rest of his staff have seven games and more importantly three losses to look at from that Houston series to try to figure it out.

It is no secret that the Nuggets faced two great matchups in the first two rounds of these playoffs. Denver plays jump shooting teams very well and that is just what the Hornets and Mavericks are and the Nuggets defense helped steer them into living on the perimeter. It'll be key for the Nuggets to try to force the Lakers to be a jump shooting team as well ... no easy task when you're facing multiple seven-footers.

The Lakers will want to live in the paint and hit timely three-pointers after establishing their inside game. Make no mistake ... the Lakers will attack the Nuggets bigs all series long and staying out of foul trouble will be key for Denver's big men: Kenyon Martin, Nene, and Chris Andersen.

Billups is experienced (7th straight conference finals appearance), strong, and deadly accurate as we all know. His numbers: 37.5 minutes per game, 22.1 ppg, 54.1% from three-point land, and 7.3 assists per game. He's been making his living this post-season with timely scoring and getting himself to the foul line. He's shooting 95.7% (66-69) from the charity stripe and has been shouldering much of the burden these playoffs by being Denver's answer to the opponents' scoring runs. You need offense? Just look for CB7.

Denver again draws a good matchup here as the veteran Derek Fisher must contend with Billups. Fish is wily, but his shooting has been suspect at 36% and he's been horrible from downtown (6-30 or 20%) and that's where he used to make his living. Fish doesn't handle the ball too much on offense and is only committing 1 turnover per game, so don't expect a Chris Paul or Jason Kidd turnover rate in this series as the Lakers triangle offense isn't dependant on the point guard.

When the backups are in ... it's speed for the Lakers with Farmar and Brown. I like Shannon Brown as he reminds me of a young J.R. Smith (trying to harness his superior talent.) Anthony Carter will have his hands full trying to stick with either guy and L.A. may look to use these backups a bit more in order to make Billups work on the defensive end. But Billups is the man here ... Advantage Nuggets.

This position is owned by Kobe Bryant. He's arguably the best player in the NBA and is always "Doin' Work" like Spike Lee showed us. (What a lame documentary by the way ... just a complete "let's kiss Kobe's ass for an unnecessarily amount of time.) Dahntay Jones wont log a lot of minutes ... probably 15-20 per game, but he'll be expected to make things difficult for Black Mamba aka Kobe. Jones isn't a complete pushover on offense, averaging 7.6 points thus far. So, Kobe or whoever is covering Jones should be aware that he can get to the rim (see Dampier, Erick) and will shoot the open three-pointer (3-10 or 30%.)

When the backups come in ... Vujacic will run some point for the Lakers with Kobe on the floor and so will J.R. Smith. Sasha is a known agitator and world famous flopper. Denver must ignore his attempts to get under their skin and cover him on the three-point line because while he's not a deadly scorer, he can shoot the three (9-30 or 30%.)

For the Nuggets ... J.R. is Denver's best scoring threat off the bench. He's averaging 16.3 ppg and shooting 49% from the field, including 40.7% from downtown. J.R. is a threat to get to the rim and can do so at will. He's at his best when he's attacking, dishing, and taking his long-balls. He can become stagnant and try to live from the outside, but he's really shown in these playoffs that he can be a complete player and a nice scoring option. As much as I'd like to call this even ... you have to give the advantage to the Lakers.

Melo will own this position in this series. Melo is playing like the star he is and is coming into his own in these playoffs. He has been able to read what the defense is giving him and I expect the Lakers to come after Melo. If Melo is driving, shooting, and dishing on offense then he'll be a major factor and the Nuggets will have a lot of success.

Trevor Ariza is a long athletic guy at 6'8'' and 210 pounds. He loves to shoot the open three (18-37 or 48.6%) and the Nuggets must not leave him open on the perimeter. Ariza possess enough skills to go inside, but where he makes the difference is on the three-point line.

When the backups are in ... LK should not get a lot of burn in this series, but if he is on the floor for extended stretches he must rebound and hit his long shots ... if not he should put on a suit and get comfortable next to Steven Hunter. Luke Walton has shown he can frustrate Melo and is a nice hustle player. Make no mistake though ... neither guy is Shane Battier or Ron Artest and that is key for Melo. Advantage Nuggets.

Kenyon is getting his fill of talented power forwards. First, David West ... the talented pick-and-pop guy. Second, Dirk ... a gifted seven foot perimeter player. And now ... Pau Pau ... another talented seven footer, but an inside force. This is the biggest matchup of the series for me.

Pau is long and a nice offensive rebounder, but, like Dirk, Pau can be bullied and the Nuggets have that bully in the form of KMart. I think Kenyon's biggest difference can come on the offensive end. Pau is not a very good defender, but he's capable against post players. Martin should look to attack the rim without the ball and get some nice cutting layups, put-backs, and alley-oops.

On offense, if Pau catches the ball on the block he is almost unstoppable. I don't think Denver will front Pau a lot, but you could see it some in this series. Again, I hate doubling guys and Pau is a pretty good distributor so Kenyon's ability as a one-on-one defender will be fun to watch.

When the backups are in ... Odom will be on the floor with Pau a lot. Gasol will slide to the center position and Odom will do his thing at the four. He can shoot from the outside, rebound, and attack the rim. Odom has been known to be a poor free throw shooter, but if he's at the foul line the Nuggets are in trouble.

The Birdman is Denver's energy guy, but also a key player. He'll be a pest on the offensive glass and on defense he'll be patrolling the paint. If Bird can continue his stellar play (he had food poisoning and missed game 4 and still wasn't right for game 5) and remain active he could be a great X-Factor in this series. But in order for the Bird to be a difference maker ... he must stay out of foul trouble and that wont be easy against the Lakers talented bigs. No other position on the floor features 4 key players like this one. Advantage: Even.

First things first ... if Petro or Mbenga are on the floor then there is either a major blowout occuring or something is terribly wrong.

Nene must be a factor and must be aggressive. If the Nuggets are going to get the Lakers bigs in foul trouble it must be because of Nene. The Predator is a strong defender and can either block shots or take charges ... he's tricky that way. On offense Nene has a reliable jumper, some nice post moves, and most importantly ... the ability to tear down the rim. If Nene is attacking the Nuggets are looking good.

Bynum is averaging 14.9 minutes and scoring 4.8 points per game in the playoffs. Bynum will get himself into foul trouble as he's averaging 3 fouls per game. Phil Jackson loves to start Bynum and then bench him for long stretches if he's in foul trouble. Bynum's knee must still be bothering him, at least mentally, as he has not looked very good. He has played well against Denver when healthy and could be a huge difference maker for the Lakers. The key for Denver will be to attack him early and get him and his huge body (7' and 285 lbs.) out of the game. If Bynum is out there he will hurt the Nuggets. Advantage: Even

The chinks in the Lakers armor is apparent ... they are a Dr. Jekyll and Mr. Hyde. Some games they look like the team that won 65 regular season games and other nights they look like they should be counting their ping-pong balls.

The Nuggets are peaking and gelling at just the right time, they are well rested, have loads of firepower on offense, and play physical defense.

After the Lakers defeated the Houston Rockets ESPN displayed the stat that Los Angeles is 13-1 all-time in Game 7's ... luckily for the Nuggets they will not need to win that final game in L.A. Nuggets in 6. 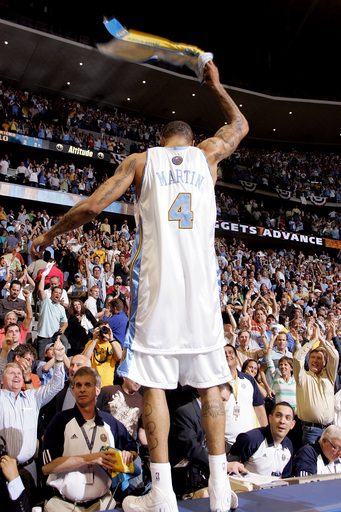