Every day when we go to work we are asked to do a job. Sometimes it's a rough job and there are people out there who like to get their hands dirty.

Tonight Dahntay Jones thrived on getting dirty. I half expected Jones to get a hose out, flood a dirt pit, and roll around in the mud ... the guy loves getting filthy and is just loving his job right now. The picture next to these words shows a man who is fully immersed in the task in front of him.

George Karl has put his trust in the former Duke player and that's quite a big step for a North Carolina man. Jones averaged 18 minutes a game during the regular season and was always on the floor in garbage time. So far, Jones has played 21 and 20 minutes in games one and two respectively with his main assignment being to slow down Chris Paul.

On the offensive end Jones was a perfect 5-5 from the floor, 1-2 from the foul line good for 11 points. Basically every point Jones scores is a bonus for the Nuggets as he has limited touches on the offensive end. His aggression going to the rim was also great to see. In the playoffs you need your role players to step into the spotlight just a bit and Jones is doing just that.

Now, I'd like to provide some pictures (I'm no pro) to go along with  some notes from tonight's game: 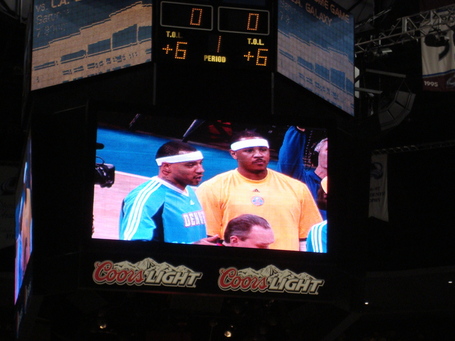 Kenyon Martin and Carmelo Anthony just before pregame introductions. Each man would have tough assignments last night. KMart would again be asked to hold David West in check and Melo needed to find his groove on offense. After snapping this picture I turned to my buddy Rich and said, "I hope these guys came to play tonight." Rest assured ... they did.

Continue after the jump for more pictures and game notes ... 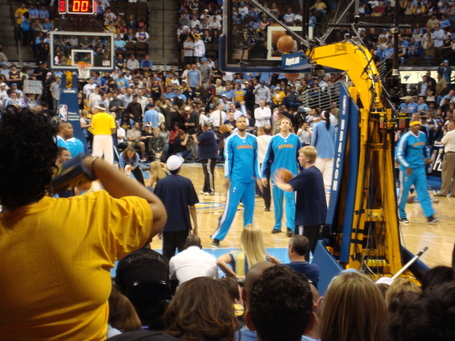 My seats for Game 2 were much improved! But I'm not here to gloat because this picture features the enemy. Tyson Chandler stands practicing free throws before the game ... I was intrigued as to how Byron Scott would utilize Chandler. Tyson scored 7 points and grabbed 11 rebounds on the night, but left a bigger impression on me for losing his cool a few times in the first half (more on this later.) 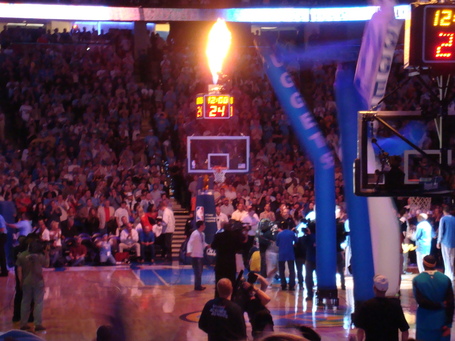 Pregame introductions with a little pyrotechnics! The public address announcer just introduced the kid from PARK HILL ... Chauncey Ba-Ba-Ba-Billups! At this point you couldn't really hear yourself think as Chauncey gets a pretty deafening ovation from the home crowd. Big games ... playoff games ... the intensity is a lot to bear for me as a fan and I can't imagine being in the hometown kid's shoes. 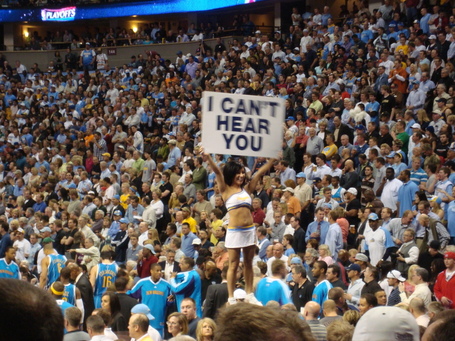 Speaking of deaf ... this cheerleader must be or else she is a liar because her sign was clearly false because tipoff was seconds away and my ears were nearly bleeding from the noise. By the way ... the Hornets bench in the background looks a bit less than motivated to me for some reason. 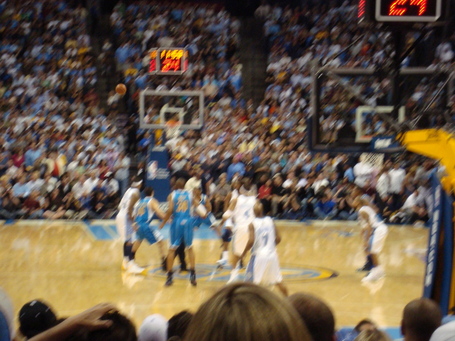 A blurry look at tipoff. The ball is somewhat in focus ... and my head is also a blur right now. As games get underway I tend to freak out and have no idea what is going to happen.

The Nuggets came out with consecutive jumpers from Melo and KMart and took a quick 4-0 lead. Melo started red hot from the floor going 4-4 to start things off.

The Hornets went to David West early and he responded going 3-3 and scoring the Hornets first six points. West however would finish the game 6-17 scoring 21 points on the night and grabbing 10 rebounds. Pretty nice numbers, but I just never felt he was a factor ... even when he was making some of his fadeaway shots. 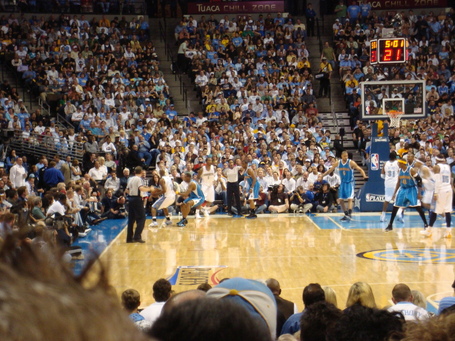 The classic shot of Chauncey Billups backing into Chris Paul as the spectators look on. Both of these point guards are the unquestioned leaders of their teams. Not a lot of folks thought that CB7 would be outplaying CP3 in this series, but it's happening. Don't believe me? Check out the box score.

Since Game 1 ended there has been a lot of talk from fans and from Billups himself that he would not or could not repeat his heroic performance. Well, in Game 2 he didn't get to 36 points again, but he did get to 31.

Billups shot 8-15 from the field including 4-6 from downtown and went 11-11 from the foul line and incredibly has committed 0 turnovers in two games. Is the extra motivation coming from those doubting his abilities against the "great" Chris Paul? Is it the desire to lead your hometown team past the first round for the first time since 1994? Whatever it is ... Chauncey Billups is my hero and a role model for any and every young point guard.

Billups is averaging roughly 33 points per game thus far and showing the Nuggets and their fans exactly what playoff basketball is all about. 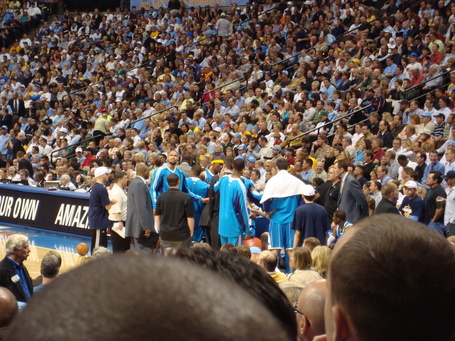 The Hornets grabbed a quick timeout after David West draws a foul on Melo. It seemed early like the Hornets game plan was to draw calls by falling down as many times as they could. Plenty of "boos" could be heard throughout the first half as the Pepsi Center was not in agreement with the way the officials were seeing the game. 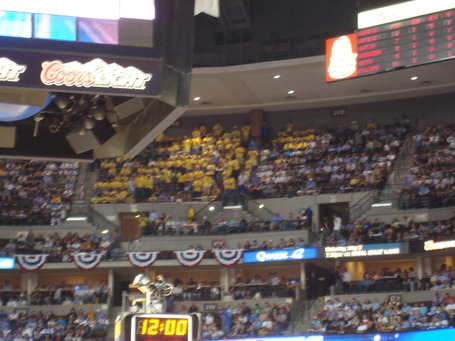 Chants of "Meeelllooo's Yellllllows" could be heard coming from this group across the entire arena. Pretty awesome if you ask me. And each time Billups stepped to the foul line chants of "MVP" echoed throughout the Pepsi Center as well. I think we all agree that LeBron is the league's MVP, but clearly Billups has been invaluable for Denver.

My boy Rory was said to of been trying to start a "coach of the year" chant for Billups as well ... that one already belongs to the Cavs' Mike Brown and doesn't really roll off the tongue. Chants, strangers high-fiving strangers, the playoffs ... you gotta love 'em! 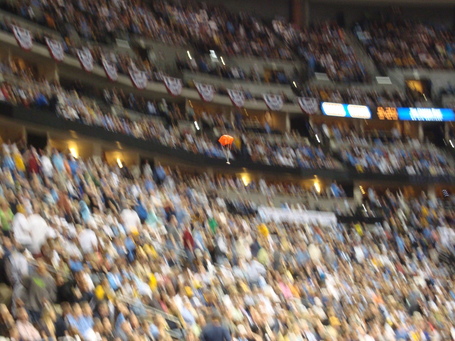 Focus your eyes on the tiny parachute prize in the middle of the picture. You see it? Well the Pepsi Center crew drops these bad boys during timeouts ... I think they are usually rolled up t-shirts, but I could be wrong ... I've never caught one.

Anyway, at the 7:38 mark of the 2nd Quarter with the Hornets up 31-30 I snapped this shot because it represented the Nuggets' offense at the moment ... in a free fall. The Nuggets went scoreless on five straight possessions from the 10:27 mark to the 7:16 mark before Chris Andersen tipped in a miss to give Denver a 32-31 lead. The only good news was that the Hornets were in their own funk at the time.

I recall thinking that this was one of those game moments where one team breaks out and goes on a run. And the Nuggets went on a 20-13 run to end the half and took a 52-44 lead into the locker room. That run boosted my confidence and I felt that Denver was going to pull away in the second half. 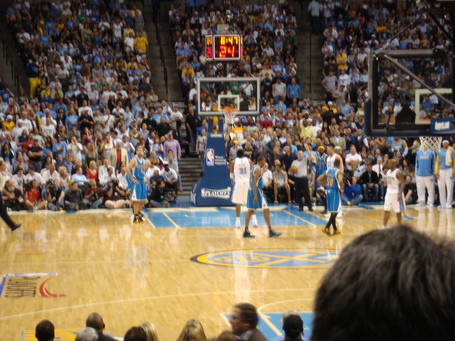 One more shot before moving on to the second half. At this point (6:47 mark of the 2nd QTR) Nene was shooting free throws after a hard foul by Tyson Chandler and subsequent double technicals were called after Tyson shoved Nene.

The knock on Nene was that his mental edge could be taken away with physical play. Thus far in the series it has been Chandler not able to handle the physical nature of this series. Nene finished the night 4-13 from the field with 8 points and 8 rebounds.

Nene played pretty soft last night. He's not getting a lot of calls that he wants, but he has to really force some dunks and power the ball every time he gets it in the post. He takes a lot of contact, but he must continue to attack. 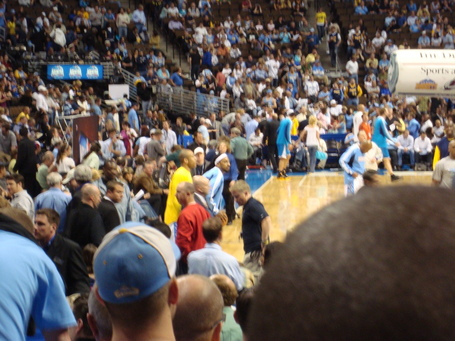 A shot of the Crime Stopper's alter ego "Kool" during second half warmups. Kool, often mixed in among the mob until he's needed. Renaldo Balkman was the only player to record a DNP-CD last night for the Nuggets as he never entered the game ... not even during mop-up duty. Karl shortened his bench even more last night by cutting Kleiza's minutes from 24 in Game 1 to just 9 in Game 2.

The Nuggets rolled with an 8 man rotation last night using LK basically to spell Melo for a couple breathers. 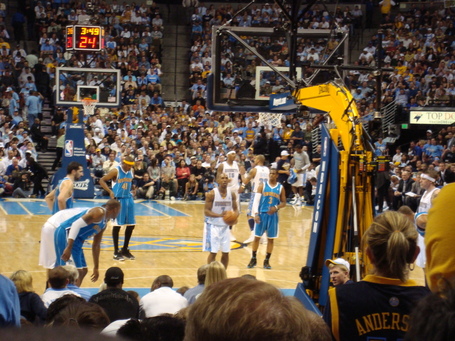 Melo finished the night 10-20 from the field (2-5 from distance) for 22 points and handed out 9 assists. Going forward I'd like to see Melo get to the rack, especially on the nights when his shooting touch isn't so true. But Melo shredded the Hornets double teams last night with some precision passing ... read again 9 assists. 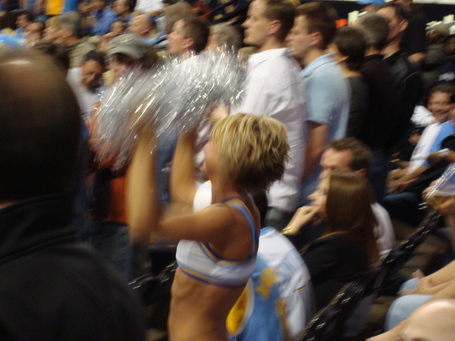 The second half however left the fans with plenty to cheer about. The Nuggets saw their lead balloon to as much as 17 points in the 3rd Quarter and to 23 points in the 4th Quarter. It seemed like the Hornets just ran out of gas as the Nuggets started to crank the throttle.

Kenyon Martin held West to another quiet, but more effective night (at least in the stat column.) KMart also was a factor on the offensive end scoring 13 points, grabbing 5 rebounds, and adding 6 assists (mainly feeding the post.)

J.R. Swish found his range from three point land going 3-5 from distance after an 0-7 performance in game one from beyond the arc. Smith finished the night 6-11 from the floor for 15 points. He again had a couple drives that just blew the crowd away. One where he drove the lane, spun back inside around two defenders, and laid the ball in perfectly at the rim. It's been a pleasure watching his game expand all season and even better watching him continue to have success in the playoffs.

The cult figure Birdman was perfect on the night going 3-3 from the field for 6 points, adding 5 rebounds, and 1 block. I don't mind when the Bird doesn't block multiple shots because I know he's affecting opponents shots and decisions to enter the paint by just being on the floor. Bird was also staying in his nest and protecting the glass a bit  more last night. Birdzilla had a put-back dunk on a Billups miss that had the crowd going crazy and sent me into the seats after trying to soar like only the Birdman can. 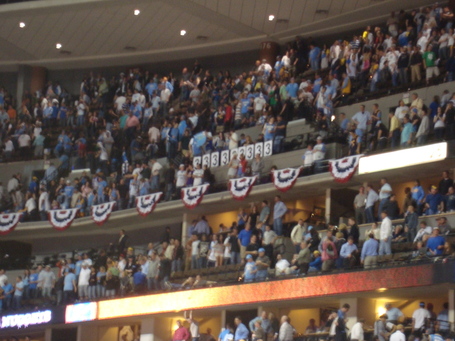 The 3-point tracker only read two after the first half, but the Nuggets found the long ball and nailed 7 threes in the second half en route to blowing out the Hornets once again. 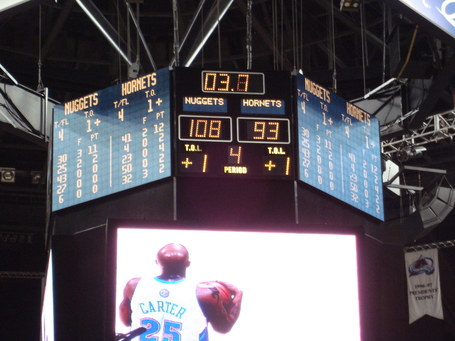 It's 2:13 a.m. and I'm exhausted yet beyond happy that Denver is heading to New Orleans for an early Saturday tipoff up 2-0.