According to Benjamin Hochman of the Denver Post ... The Crime Stopper Renaldo Balkman expects to play tonight after straining his groin against the Nets. Story here. You know I wasn't too surprised that Balkman did injure himself a bit - with his sporadic playing time I'm sure his body isn't quite used to all this burn he's been getting recently.

Sorry boys and girls ... I couldn't help but use a cheesy line since we are just one day removed from St. Patrick's Day. I wish the Nuggets would rock some type of green uniforms tonight since they failed to do so on Monday against the Nets.

Speaking of uniforms ... why don't the Nuggets ever rock any throwback jerseys? Just about any time the Cavaliers are on ESPN they have some type of goofy new yellow jersey on it seems. So I ask ... why not the Nuggets?

Would it be too much to ask to see these skyline jerseys for a game or two?

And what about our mining jerseys? We used to wear those every once in awhile ... why not rock them for a game or two? Perhaps a bit baggier than the one Issel is rocking here: 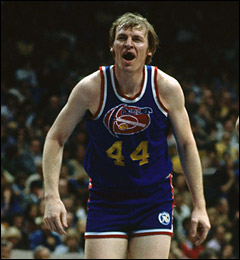 Enough about the Nuggets' attire for now. (vote below on the throwback situation)

The Nuggets after being 17-11 away from The Can have dropped six straight games out on the lonely road. Their last win coming exactly one month ago on February 18th in Philadelphia.

But the times ... as they say ... are a changin'! The Nuggets have won three straight against sub .500 teams and will face another one tonight. As we have all come to figure out ... Denver must share the ball and come out strong against the Grizzlies.

The issue in the six road losses have been the Nuggets letting these lesser teams hang in the games and Denver playing from behind. That's the exact formula that Denver should use if they want to lose. You have to take the home crowds out early and deflate any illusions the Grizzlies may have about being able to win this game.

Monday night, March 16th, against the Blazers the Grizzlies found themselves down early (29-20 after the first quarter), but they overcame that lead because the Blazers didn't keep the gas pedal down. With just over nine minutes left in the 3rd Quarter the Grizzlies were down 55-52 and ended the quarter down just seven 73-66.

The Blazers had to use an extended effort in the 4th Quarter to escape with the win. You can read more about it if you'd like over at Blazers Edge. The point is that we all know Denver will play down to their competition from time-to-time, especially on the road recently. But I think Denver is turning a page, getting refocused, getting healthy sans Balkman, or waking up ... whatever you want to call it.

True the Nuggets haven't faced a real test as of yet on this mini win streak (March 23 at Phoenix comes to mind.) You could count the Nets, but they didn't have Devin Harris so I counted that as a win as soon as I learned he'd be out. But let's not get ahead of ourselves.

The Grizzlies are 2-13 in their last 15 games. They still go as O.J. Mayo (18.7 ppg) and Rudy Gay (18.6 ppg) go, but there is also a new player to watch. The re-emergence of Mike Conley. Memphis Head Coach Lionel Hollins has basically, to borrow a line from former Kansas City Chiefs Head Coach Dick Vermeil, demanded Conely to take his diapers off.

Memphis basically gave away promising backup point guard Kyle Lowry to the Houston Rockets (through the Orlando Magic) for a 1st Round pick. This proved that Hollins was serious about making this Conley's team.

Denver will sweep this series and find themselves much like the lucky clover ... with 4 straight wins.