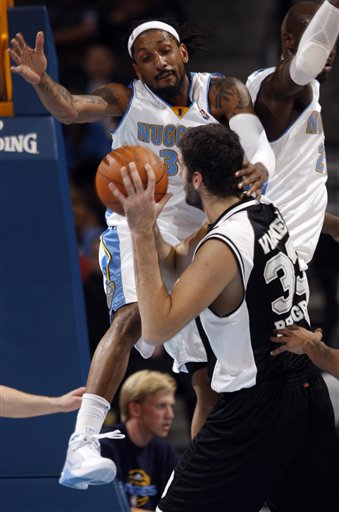 Denver Stiffs got our first look at the 2009-10 version of the Denver Nuggets. With the NBA dropping the ball on pre-season coverage we decided our best option was to head over to the Pepsi Center and catch some live action.

If you like to tally up wins and losses you'll be glad to know the Nuggets pulled their pre-season record to 1-1 by beating Partizan Belgrade 102-70. But if you are like me, you use the pre-season to get a look at the new pups and to see if the "old dogs" have added any new tricks to their game.

First things first ... Keith Brumbaugh, Joey Graham, Chauncey Billups, and Chris Andersen did not play last night. The crowd attempted to goad George Karl into playing the cult figure with chants of "Birdman," but we all had to settle for a few wing flaps from the Bird instead.

Of the guys listed above, I really was looking forward to seeing Graham play. I wanted to see how his game has grown since his days at Oklahoma State, but I'll have to wait to see how he goes about averaging his 6.4 career total points a game.

On to the guys that were in action ...

Anthony Carter: He had his stroke going last night. Carter definitely falls into the "old dog ... new trick?" category and it looks like this old dog has been working on his shooting. A.C. has some extra motivation heading into the season and that motivation is Ty Lawson ... nothing will get you more focused than knowing there is a guy looming to take your job. I wish NBA.com or ESPN a box score up, but the Post has Carter's numbers at 5-6 shooting on the night ... I don't remember him missing a shot! A.C. didn't record an official assist, but he was pushing the pace and did toss an alley-oop to Nene ... although it sailed a bit high and out of bounds. Carter's job as Denver's primary backup point guard does not appear to be in any danger ... like it or not.

Ty Lawson: I sort of dismissed all the talk about Lawson being a small guard. I don't tend to think that professional athletes need to be certain dimensions in order to succeed. Look at Elvis Dumervil of the Denver Broncos ... all the guy hears is how he's undersized ... yet he accounts for 60% of the Broncos sacks this season. That being said, seeing Lawson in person for the first time ... he's among redwood trees out there. Lawson saw extensive action in the first half, but Dontaye Draper got the bulk of the minutes in the second half. When Lawson was on the floor he was looking to run when the ball came to him in transition. On two separate occasions Lawson was looking to push the ball up the floor, but had the ball jarred from his hands and committed two turnovers. Lawson hit a corner three and his shot, although unconventional, seems to be working at the NBA level. It looks almost like Lawson double clutches with his jumper as he loads up to shoot. I wanted to see him go to the rack a little more ... but playing Partizan may have provided a new challenge for the "Rook." Lawson is going to have to earn his minutes this season, but I think he's up for it.

Dontaye Draper: I was a bit surprised that Draper got so many minutes in the second half. Karl even utilized a Draper and Lawson backcourt for the last few minutes of the game that may have set some type of record the smallest guard combo in NBA history. I don't see Draper earning a roster spot with the Nuggets, but he is using his time with Denver to audition for an NBA job. Draper is quick and handles the ball well in traffic, however, his shot doesn't have much rotation on it and he was having trouble knocking down his jumpers.

J.R. Smith: Swish started last night and saw extensive action after missing the Jazz game. His three-point shot wasn't finding the mark last night and I'm going to blame his shoes. Smith went an all black sneaker and they looked a bit out of place with the rest of the team (as most of the Nuggets wear a white shoe with some yellow and powder blue highlights.) What weren't out of place were Smith's two MONSTER dunks in the first half. J.R. got the crowd going with a two handed power dunk over 7'6'' Slavko Vranes ... yes, you read that right ... SEVEN FOOT SIX INCH Slavko Vranes. Smith followed that dunk with a steal on the following Partizan possession and as he raced towards the hoop you could tell he was trying to determine how to dunk the ball on breakaway attempt with a defender in the lane ... Smith went up left handed and threw down a southpaw tomahawk jam over his defender ... Rocky Balboa would have been proud of that left! J.R. had a couple nice passes and was looking to attack the lane and he hit a nice fall-away jumper from the top of the key. I don't know yet how much his game has grown since last season, but it was good to see him attacking the hoop. (It was also weird seeing J.R. in a #5 jersey for the first time.)

Arron Afflalo: Word around the camp fire (camp fire? what?) is that Afflalo has an incredible work ethic. I was excited to see him in a Nuggets uniform. There undoubtedly will be Afflalo and Dahntay Jones comparisons throughout the season, but make no mistake ... the two do not compare. Afflalo looked to get his offense going last night and has a pretty release on his shot. He looked to lock down his man on defense and moves well in staying in front of his man. Afflalo is going to have a nice season and I don't really see him not starting for the Nuggets.

Carmelo Anthony: Melo looks as good as ever. He was attacking the rim, throwing down dunks with authority, and hustling. He looks the same to me as he did at the end of last season ... I didn't notice a lighter Melo, but he looks to be in good shape. It'll be interesting to see Melo's motivation for the season and if last night was an indicator ... I think we are in for good things.

James "Flight" White: White hit a nice three last night, but what I was waiting for was "Flight School" ... as the arena announcer when White checked into the game. I was trying to figure out how many people at the game knew who White was and what he was capable of doing on a breakaway dunk. At roughly the 2:20 mark of the fourth quarter White got his chance to showcase his hops. On a Partizan turnover Draper threw the ball ahead to White and he was able to take off ... he threw down a double-clutch two handed dunk with his chin about even with the rim to give Denver a 98-63 lead. If White makes the final roster we are in for some electrifying dunks.

Renaldo Balkman: When Balkman is on the floor ... good things tend to happen. Balkman scored 10 points and grabbed 6 rebounds last night. I've been a fan of Renaldo's since he was hounding Melo as a member of the Knicks. The guy is all over the court and I don't think he has ever heard the word quit. Balkman played a lot last night and I really hope he finds his way into the regular rotation this season.

Kenyon Martin: Andrew commented at the game that he thought K-Mart looked to be in great shape, I concur. Martin looks as fresh as he's been saying. His jumper doesn't seem to be improved, but I'll take a healthy K-Mart. When Martin was not in the game he was WORKING THE REFS! The replacement officials definitely know Martin now ... he didn't let up barking at them the entire night. With under a minute to play he was still standing up and voicing his opinion.

Malik Allen: Allen played quite a bit in the first half and he's a crafty veteran. On one defensive possession he opted to lower his shoulder and bull over a Partizan player in his way in the lane ... but he was sneaky about it. If Allen proves capable of knocking down the 15-foot jumper he could earn some minutes this season. He has a big body and could help spell our bigs.

Nene: The Big Brazilian was active last night. For those of us concerned about his finishing around the rim ... threw down a nasty power dunk over his defender for an And1 ... I really think fatigue played a big part with Nene last year and it'll be key to get the big fella some rest ... that's where hopefully Allen will provide some minutes here and there. Nene didn't seem to have any discomfort in his arm and looks ready to go. And he better get it all going soon as he not planning on playing in the NBA much longer. (Click the link for his retirement talk.)

Johan Petro: I didn't realize how big Petro is. He is a large man ... not only tall, but he has some weight to him. Petro is pretty fascinating because he possesses speed and good athleticism for his size. He continues to show some promise as he had a nice up and under move where he finished strong with a nice dunk. Petro is still a project, but he's a cheap one.

Overall the game was fairly sloppy. There was an "All-Star" game feel to the first half. Melo said through the Denver Post that Karl was not pleased with the game and I don't think he should have been. Although it is the pre-season it's important to start to get into the flow. The Nuggets will hopefully get things tightened up as they get ready to head to China.

It was great to get back to the Pepsi Center for a game. Now that basketball season is right around the corner it really doesn't feel like it ever went away. There was a heavy Partizan crowd at the game and they were going NUTS all night! Chants, cheering, booing, and flag waving ... that's how the Partizan faithful rolled. I even took a picture for a guy that didn't speak a lot of English, but was excited to see his team play.