Atrocious, splendid, repulsive, fantastic … a lot of adjectives get thrown around when you look at throwback uniforms. But no matter how you feel about them, they offer another level of entertainment to a great product and get people talking.

According to my count (never the mathematician) … the Denver Nuggets wore throwback uniforms a total of zero times last season. Zero times for a team with some historically sweet uniforms!?!?

It didn’t always used to be this way … back in the 2004-2005 season the Nuggets broke out their old pickaxe jerseys that they wore during their last season in the ABA (1975-76).

And more recently the Nuggets have worn their old Denver Rockets jerseys, honoring the franchise that broke into the ABA in 1967. The reason the Nuggets became the Nuggets is because that same year (1967) the San Diego Rockets (now of Houston) began play in the NBA and that would eventually prompt Denver to re-name the team just seven seasons later as the ABA planned to merge with the NBA.

(Side story: According to the Nuggets NBA page the team chose "Nuggets" to pay homage "to the 19th century mining boom in Colorado, when people rushed to the area, hoping to make their fortunes by panning gold and silver nuggets. It also draws a connection to the defunct Denver Nuggets that played one season (1949-50) in the NBA.")

The pickaxe jerseys are pretty cool and a good change of pace to the Rocky Mountain Blue that the Nuggets wear today. But the Rockets jerseys are boring and don’t offer much aside from some orange highlights … and the Nuggets are not a boring team! 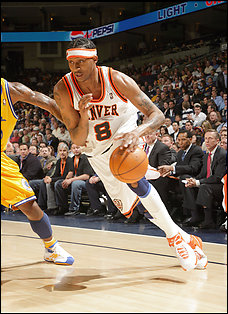 I want to see the Nuggets dust off their rainbow city skyline jerseys that the team dawned in the late 1980’s and early 1990’s. Heck, Carmelo Anthony showed up in Denver after the 2003 NBA draft to be introduced to the media in an Alex English jersey! Even Kiki Vandeweghe had on his old jersey at the press conference to introduce Denver’s next Superstar. 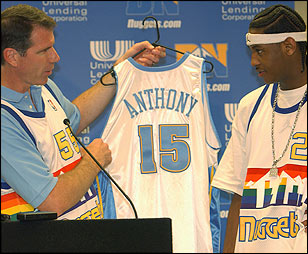 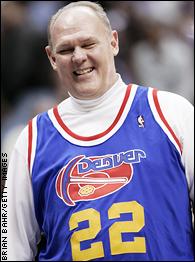 via espn.com
Even George Karl got in the throwback
spirit back in 2005.

I would have to think that the players would be lobbying to don some jerseys from the great eras of Nuggets basketball.