Getting You Geared Up for Denver Nuggets Training Camp

Share All sharing options for: Getting You Geared Up for Denver Nuggets Training Camp

We are nearing the start of training camp and the Rocky Mountain News and Denver Post have started to crank out some stories.  Granted they are publishing pretty much the same stories, but it is exciting to know that after two months of nursing home level activity we are nearing the time of year where there will once again be daily news to discuss.

Chucky Atkins has undergone surgery on his balky knee.  I find the so and so had successful surgery on his wherever press release to be the most ridiculous of all press releases, but I realize why they have to be done.  It lets us know when the surgery was performed, but they all talk about how the procedure went perfectly.  We all know that every once in a while there are complications and more surgery is required, just ask Gilbert Arenas, but no matter how badly things may have gone all we get are the surgery was a success statements.

I always dream of reading something like this someday:

Chucky Atkins had his knee violently ripped open with sharp metallic utensils while the doctor rummaged around looking for abnormalities.  It was discovered that the status of the knee was inexplicably unstable and the surgeon made several mistakes during the attempt to make things copacetic again.  Most likely Mr. Atkins will be on and off the injury report all season long.  Dr. Kneespecialist said, "That went much worse than expected and I probably should not have drank that fourth beer at poker night yesterday and the two Snickers at lunch was a mistake too.  Oh well, off to the golf course for my weekly skins match with Fran Drescher."

We are probably not going to see that press release any time soon.

One of the major questions this season revolve around Nene, his ability to stay healthy and his ability to come into camp in shape.  In this Denver Post article Nene claims he is in shape and ready to go.  It sounds like he definitely learned from his mistake of letting himself go last summer and according to the article only spent two weeks instead of two or three months or so in Brazil this offseason.  If anyone has eaten at a Brazilian restaurant you can see how he packs on the pounds.  (This section brought to you by the Brazilian Beef Council.  Brazilian Beef, it tastes great and this year your team is depending on it.)

George Karl proclaims a season too late that this is the year the Nuggets need to come through or else there will be major changes.  Last year was that season Coach.  Did you notice how the team was a non factor in the playoffs and owner Stan Kronke decided enough was enough and demanded the payroll be reduced?  The die has already been cast on the George Karl/Allen Iverson Denver Nuggets.  Karl also claims players realize they need to pick things up on the defensive end of the floor without Camby around to block shots.  Of course, we always hear the same proclamations regarding the need for a renewed focus on defense every year at the beginning of training camp.  Still waiting…

Local high school standout Nick Fazekas is most likely going to sign a league minimum non guaranteed contract to join the Nuggets for training camp.  Fazekas claims that he has a lot of other offers, which I believe, and he thinks he has a good shot at making the Nuggets.  I would be interested to know if the Nuggets told Fazekas whether or not they are definitely planning on carrying a 14th player on the roster.  If they are serious about saving money they may very well break camp with the minimum thirteen.  If I was going to turn down a handful of other teams to try out for another one I would darn well make sure they were serious about keeping a 14th player on the roster.

Fazekas' strong suit is his outside shooting, but he has not proven to be effective from the NBA three point line (0-2 in 269 minutes last season), which will hold him back.  The same article states that another former local high school product Michael Ruffin, who must live with the fact that he once had a shot blocked by my friend Jon on a Denver playground, might also be added to the training camp roster.

I do not have a relevant link for this and I do not know if this is new news or old news, but it is new to me.  TNT is going to televise the outdoor game at Palms Springs, CA between Denver and Phoenix on Saturday, October 11 at 8:00 PM Mountain time.

Over at Bullets Forever Pradamaster has a great look at the Nuggets from an outsider’s point of view.

Doing some research today I stumbled upon a links page for the NBA Player’s Association.  It has links to player websites, foundations and businesses.  Chucky Atkins was one of the players with a business website.  Click here to be utterly disappointed.  What on earth does the generic picture of the girl have to do with anything?  If this is Chucky’s idea of how to earn a living after basketball he better play until he is able to start drawing social security.

In one of the most linked news items of the day Portland has passed on signing Shaun Livingston.  Livingston must still have some serious physical issues to not be on a team yet.  JLucas reported in the comments of this post that he has heard Livingston needs to ice down his knee for a very long time after working out.

Henry Abbott at TrueHoop provides absolutely first rate coverage of a symposium the NBA initiated for the media to get a better understanding of the issues involved with refereeing including how the professionals that cover the games hurt the credibility of the officials by spouting incorrect information and interpretations.  If you are an NBA fan it is a must read.

I do not know if you have been following the Stephon Marbury soap opera in New York (judging from the comments most of you are), but from the perspective of a Nugget fan you should pull for the New York Knicks to waive him.  Right now there are three $20.9 million expiring contracts that could be used as massive trading chips this season.  One is Jason Kidd.  The other two are Marbury and Allen Iverson.  The fact that there are three massive expiring deals for players who all three teams will probably be motivated to move will drive the market for those contracts down.  If Marbury is waived or bought out, that will take one of those contracts off the trade market and thus make Iverson’s (and Kidd’s) more valuable.  Should the Mavs do better than I expect them to Dallas might decide to hang on to Kidd leaving the Nuggets with the only contract of that size left in play driving the price up further for anyone interested in acquiring it.

The Orlando Magic have unveiled new uniforms and the Bucks have new alternative uniforms.  I miss the old Bucks unis from the 80’s where they had the green and white stripes running down the side and along the edges.  Depaul’s red white and blue ones were the best though. 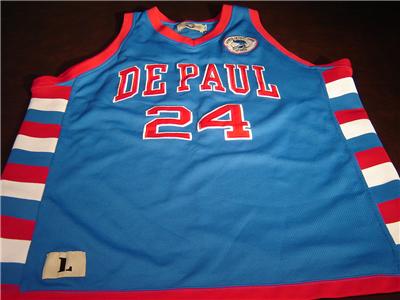 Monta Ellis proved that he learned his lesson from former Dukie Jay Williams.  Motorcycles can end your career, but mopeds will only cost you a month or two of the regular season.  Wise young man that Ellis.

How slow has it been the past few weeks?  Check out the massive amount of analysis that J.E. Skeets over at Ball Don't Lie put together regarding the Charlotte Bobcats signing of Carl Landry to a three year, $9 million offer sheet.