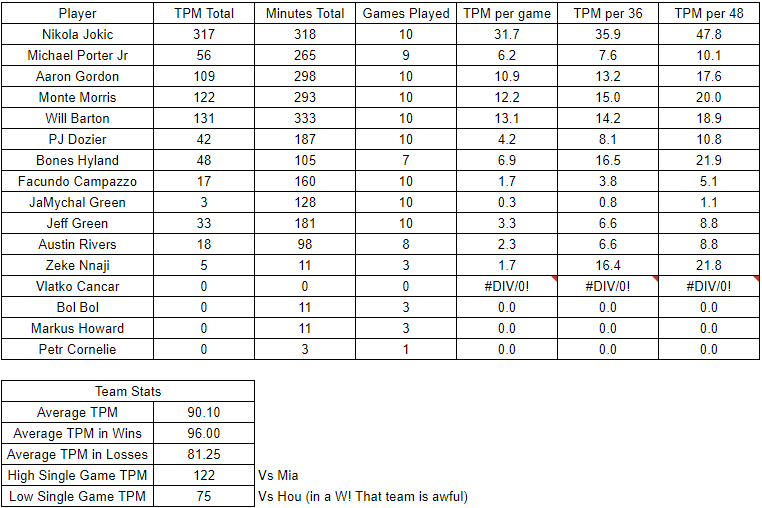 Qtr1- The Nuggets go with their 7TH starting five, consisting of Morris, Barton, AG, Uncle Jeff & MVP. The Heat counter with Lowry, Robinson, Martin, Tucker & Bam. Marqueef is still out, because when you play stupid games, you win stupid prizes. Miami are without their best and third-best player, while Denver is still without their 2nd and 3rd best players, but Jokic/Bones return tonight! MVP wins the tip and we are under way. The Miami fans are of course booing Jokic every time he touches the ball, and will all lose their voices by halftime. Denver is struggling with entry passes to Jokic in the early-going. Denver leads by one at the time of the first break, 9:55, as Malone challenges a charge call on Barton. He'll win this one as Bam had a foot in the circle. He indeed wins the challenge.

Miami's strategy early appears to be to have all of their remaining NBA level players, foul out. The arena in Miami is about half-full and there is no question, sound being artificially piped in. Lowry scores, and has already topped his output from last time, with these two points. Rivers sets to check in first for Denver's bench at 5:18, leading by four. Nnaji is next off the bench for the good guys at 4:45, up three. Facu also snuck in. Bones enters at 3:51, up three. Joker gets his first spell at 3:12, with 9/7/0, leading by five. Barton re-enters but I'd have rather seen Vlatko, so everyone could play more natural positions. Austin is STILL not a SF. Barton is DEFINITELY not a PF. Zeke gets two early fouls, so maybe Vlatko enters now. Not so, as Denver leads by eight, with 1:36 remaining.

Qtr2- Vlatko is in for Zeke to open the 2nd period. The Nuggets bench is playing EXCELLENT defense. Vlatko earns two quick fouls of his own, but Denver leads by nine at 11:00. Only Vincent of the nine players for Miami to enter, has yet to acquire a foul. Barton looks dreadful for the third consecutive game. He's tossing the ball out of bounds left & right and providing zero defensive awareness; sagging into the lane to poach boards as his man continuously gets open looks and long rebounds. Miami cuts it to three at 9:19. Denver has one 2nd quarter bucket; a three from 40 feet by Bones. Bones makes another from well beyond the arc. Make that three in a row! He's first in double digits for Denver. Gordon & Green are back in for Denver. those Barton/Bench minutes were no bueno.

Jokic/Monte re-enter at 6:57, leading again by nine. Bones remains in, as well he should, for the struggling Barton. Denver takes a 12 point lead on the strength of a 9-0 run, on a three by Green, at 6:21. He makes three in double digits for Denver. Bam has zero points vs MVP tonight. Barton enters for Bones at 4:58, which is a mistake, leading by 12. Miami has nobody who can defend Jokic/AG down low and they are getting a steady diet of just that, as a result. Robinson gets his third foul and checks out at 3:07. The lead for Denver is now 16. I've gotta think Barton must be nursing that ab injury, the way he's performed since it. The lead is up to 20 with one minute on the nose, remaining. Jokic has yet to miss from the floor or the line. He has 17/9/2. He finally misses on a blocked shot that should have been called a foul on Dedmon.

Qtr3- The two squads exchange threes to open the third. Barton is struggling mightilly to stay in front defensively of Duncan Tap-dancing Robinson, which tells you all you need to know about Will's current state. Joker has the 2D with 17/10/3. Bam is finally gaining traction offensively, and the lead for Denver is down to 19 at 8:42. Miami's strategy has changed from fouling out to Bam taking 20 footers, and while it's more sound than the former strategy, it's not sustainable. Jokic sticks the three and it results in an and-one, and the third foul for Bam. MVP misses the free-throw, however.

AG makes four in double digits for Denver, and they lead by 24 at the time of the first break, 7:05. Bam is starting to get rough with Joker and the refs need to stay right on top of this situation. Miami cuts it to 18 and has drastically increased their defensive physicality, at 5:31. I miss Bones. Rivers is first off the pine for Denver again. Facu is also in at 4:44, leading by 18. Zeke is in for Jeff at 4:11. Facu drains a three and the lead is 20 again. "Where is Bones?" I wonder aloud, as Barton checks in at 1:56. The answer is, he snuck in without my noticing. Joker sits at this time, leading by 19. Lowry is one floppy-ass son of a... Facu sticks a three at the horn.

Qtr4- The Nuggets need to close this one out swiftly, so my dog can get her insulin on time. Damned Least-coast games! AG/Green/Barton are the starters out there to open the 4th, along with Bones/Facu. AG falls asleed on consecutive posessions defensively, allowing Miami to cut it to 13. Will makes five in double figures for Denver. Looks like Jokic will have to unnecesarily lose tire tred tonight in the 4th. Barton is the only starter not in double digits in standard +- and he has a woeful +3 in comparison. Struss is keeping Miami in it from downtown, and the lead is 14 at 8:43. Jokic enters aong with Monte at this time. Facu remains in as Will sits. Joker with a beautiful give & go alley-oop to AG, up amongst the rafters.

Jokic/Bam have identical statlines currently, but Jokic has thoroughly outplayed his counterpart. the lead for Denver is 16 at 7:30. Bones is T-ed up for taunting after drilling a three. Weak-sauce! His 19 points are a new career high. Facu/Bones have earned these closing minutes tonight and I hope they remain in. The lead is 15 with six minutes to go. The lead is 18 at 4:43 as Green/Barton ready for re-insertion; a mistake by Malone who sends the wrong messages when he rewards the bad play of Barton and doesn't reward the good play of Bones/Facu. Denver quickly increases the lead to 21, so what the hell do I know about anything any old way? The sparce crowd is becoming... sparcer... and that should just about do it. Morris makes seven in oduble digits for Denver. Bol is in, and that's my cue.

Denver is paced in TPM by Nikola Jokic: +32 as they win convincingly on the road, by a score of 120-111; a game in which the score is not indicitive of the dominance.