The Denver Nuggets have continued to aggressively pursue free agents and have landed a point guard today.

Benjamin Hochman, from the Denver Post, has reported that the Nuggets have come to terms with free agent point guard Nate Robinson on a two-year deal. Make no mistake, Robinson didn't sign with the Nuggets to be the team's third point guard.

Reserve guard Nate Robinson has agreed to sign with the Nuggets for two seasons, a league source confirmed Monday.

Sam Amick reported that Denver was offering Robinson the bi-annual exception, which has a maximum value of $2.016 million and can only be offered for up to two-year deals. The BAE, as it's known, cannot be used in consecutive seasons, so the Nuggets will not have the BAE in the 2014 offseason to offer any players. The Nuggets also are allowed to split the deal up among players, so we'll have to wait to see if Robinson got the entire BAE or a portion of it. Either way, it's a reasonable contract for the 29 year-old guard (he turned 29 in May).

Again, Robinson likely didn't sign with Denver to backup both Ty Lawson and Andre Miller. One would have to think that another move is coming as Robinson had a big season with the Bulls last year and it'd be hard to imagine him wanting to go back into obscurity buried on a team's bench.

This signing likely means another move is coming at some point, sooner rather than later. The Nuggets will likely look to deal backup point guard Andre Miller, who will make $5 million this season and has a $4.6 million not fully-guaranteed deal for the 2014-15 season. Denver could also be looking to move Ty Lawson, but that seems very unlikely considering his breakout season with the team as both a player and leader.

Robinson started 23 games with the Bulls last season and played in all 82 games for the team, who were missing Derrick Rose. He helped the team earn a 45-37 record, as well as the fifth seed in the Eastern Conference. Robinson helped guide the Bulls to a first round upset over the fourth seeded Brooklyn Nets (4-3) and he averaged 17 points and 3.6 assists in that series, including a 34 point performance in a thrilling overtime Game 4 win.

The Bulls would go on to lose the Miami Heat in five games, but it was a team decimated by injury during the season and in the playoffs - they played against the Heat without Luol Deng and Kirk Hinrich. Robinson showed last season to be a threat from three-point land and when attacking the rim. He can penetrate with the best of them and was adept at drop passes with the Bulls, as well as finishing above the rim, and drawing fouls. Here is his "heat zones" according to Basketball Reference, taking into account his 1,084 shots last season: 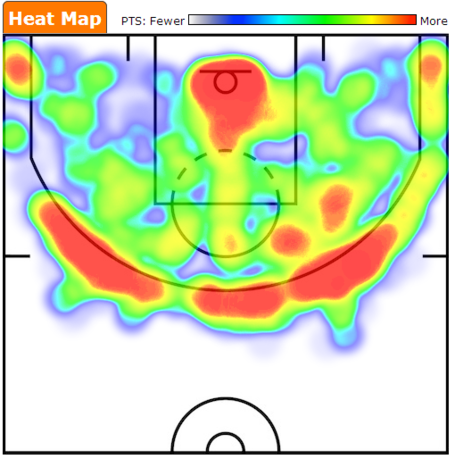 You can see that he can score the ball well from just about anywhere on the floor, but he's best when attacking the rim or taking shots from the corners or above the break on his three-pointers. His 141 three-point makes are above-and-beyond anything Miller provides as a stretch guard as Miller connected on just 17 threes last season.

Robinson is listed at 5'9" and 180 pounds. The theory that Denver needs a bigger guard off the bench to spell Lawson it a ludicrous one. Robinson will give the Nuggets some scoring pop, but he also has concerns about being a score-first guard who needs to pay more attention on the defensive end.

Additional statistics between Nate and Andre from last season:

Robinson will be joining his sixth NBA franchise in his ninth, upcoming, season (Knicks, Celtics, Thunder, Warriors, and Bulls). Last year I asked Wilson Chandler about this past year's Nuggets team having the best chemistry of any team he has played on; he said it was, but that a Knicks team he was on with Nate Robinson was close if not even to it. Danilo Gallinari also briefly played with Robinson from 2008-2010 (about a season and a half) with the Knicks.

This is a nice value add for the Nuggets, but one that surely sets up another move ...

Views on Robinson that you can use:

-This is the first "Nate" the Nuggets have had in forever. In fact, I cannot recall the last Nate the team had. Perhaps this is just cool to me, since my name is also Nate, duh!

-Robinson is perhaps most well-known by Nuggets fans for his role in the infamous brawl at Madison Square Garden back in 2006 that landed Carmelo Antony and J.R. Smith some hefty suspensions. Watch video of that brawl here.

-He signed with the Bulls last season for just $1.1 million on a one-year deal.