Masai Ujiri is gone. And now George Karl is gone. Andre Iguodala may or may not opt out of his contract so he can play elsewhere. Seemingly without a rudder, who will guide the Nuggets through the chaos until next season?

I never thought it would come to this.

I can't honestly think how any Nuggets fan could. The Nuggets had just overachieved their way into home court advantage as the third seed, something only our illustrious NBA guru Nate Timmons predicted just seven months ago (though he did comically underrate the Spurs, zing!) and seemed poised for a deep playoff run behind their winning-est roster ever. Yet here we sit, having lost in the first round to a Warriors team that we all expected to beat, without a GM, Danilo Gallinari sidelined until at least February 2014, our defensive stalwart mulling his early termination option, and a head coach who can't seem to keep his name out of rumors involving other coaching positions.

Sure, there are degrees of chaos. It's not as though the Nuggets are the Sacramento Kings and beating down the door to sign John Salmons whilst embroiled in a bidding war with the city. Nor have we been mired in mediocrity like the Charlotte Bobcats or Minnesota Timberwolves.

Nonetheless, chaos is what I see when I look at the current state of affairs with this team. We've gone from three big questions to a litany of them. Josh and Stan Kroenke let the NBA's Executive of the Year walk out the door, inviting this perception of chaos - it's not a coincidence that once the Kroenke's pitiful offer to Ujiri was rejected that Karl's position as the coach has suddenly become "unsettled". One certainly can't think that helps the Nuggets make the case to Iguodala, either.

So where does the franchise go from here?

Some have opined that given the "stacked" 2014 draft that the Nuggets should blow up the roster, trading away their players for filler in an effort to get the highest chance at what appears to be a draft class loaded with talent, as in 2003. Others believe that this roster is good enough to still compete with some deft trades and offseason acquisitions.

To those in the first group, I ask - are you prepared to part ways with virtually every tradeable asset on this roster, including players like Ty Lawson and Kenneth Faried? That is the only way this team will sink low enough to guarantee themselves a spot in the draft lottery, and likely means a period of at least a few seasons and potentially longer where the Nuggets will be simply terrible. It's not as though we have a GM like Masai Ujiri to pull off incredible trades while keeping the Nuggets competitive (too soon?).

To those in the second group, I ask - do you truly believe this roster is good enough as assembled by Masai to compete for a championship in the next 2-3 years, before the contracts of our major pieces are up? If so, what players do the Nuggets need to put them over the top, and are they realistically acquirable by this team?

To both groups, I ask - do you trust the Kroenkes to open their tight wallets and GM X to make the right decisions to either keep this competitive team together and improve; or to draft, where the Nuggets have historically been below average to terrible? Or to bring in a new head coach who will lead the team to success?

Either way, you are looking at an extended period of chaos for this team with so many difficult questions to answer. The franchise's short and long term success hangs in the balance, and in large part rides on the next few moves that Josh Kroenke makes. At this point, all any fan can do is trust in Josh's decisionmaking to equip the team with the right organizational people and players while our window with the current roster remains open - if you believe it ever was or could be.

We must embrace the chaos. There is no other choice. Throw away your expectations of what happens next with this franchise, because at this point, there is virtually no telling.

Chaos is not necessarily a pit - but it can be a ladder.

Many who try to climb it fail, and never get to try again. The fall breaks them. Some franchises are given a chance to climb, but they refuse. We can cling to our hopes of the Kroenkes suddenly opening their wallets, or the Nuggets being able to replicate the regular season success of last year. Illusions.

Only the ladder is real. The climb to the Finals is all there is. 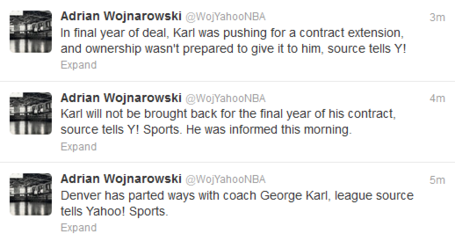 Josh Kroenke has confirmed George Karl will not be returning to Denver.