The Nuggets will play in a few games a season where they are down 5-10 points for what feels like the entire night. And then things change ...

During tonight's contest I turned to Twitter and said I didn't know how to recap this 112-104 Nuggets win, but I've seen this kind of game from the hometown team over the years. It was the classic: give up big points to an odd name, figure out ways to stay within striking distance but keep getting in your own way, rally, and win it late Nuggets game.

At the half Denver was down 66-51 and things were looking horrible on a night where both the Grizzlies and Warriors were losing, too. The Nuggets were losing the turnover battle 9-6 and Sam Dalembert was 10-11 from the field for 21 points in just 9:29 of action.

The Nuggets came out like gangbusters in the third quarter and shrunk the 15 point lead to 6 points at the 9:26 mark after Andre Iguodala found a streaking Danilo Gallinari for a crowd erupting alley-oop. But the Nuggets just couldn't close the gap and let the lead quickly balloon back to double digits for a brief moment in the fourth quarter (93-83) with 10:25 to play after a Beno Udrih three-pointer.

But the Nuggets would make another run and one that would finally stick.

"It was little bit of luck," said Andre Miller. "They exposed us early, by playing our type of game and getting a lot of easy baskets. We were able to get into a rhythm by keeping them out of the lane, forcing them to take some tough shots, and forcing them into turnovers."

The Bucks turned the ball over four times in the third quarter and six times in the fourth quarter. George Karl credited his defense for the win and talked about how it's big for the team to win games by making defensive stops. We've seen the Nuggets turn teams over late in games before with a flurry of defensive energy.

"We got them stuck in the corner," said Miller. "Then used active hands, got to some rebounds and some loose balls and lucked up with the ball and buried them."

Momentum crushing plays melted away the Bucks lead with steals late by Iguodala and Corey Brewer and plenty of run-outs by the Denver offense. The Nuggets would finally tie the game as 100-100 after a Brewer steal and dunk and Danilo Gallinari would help seal the win with a circus shot with under a minute to play.

Bucks coach Jim Boylan credited Denver's defensive effort and his team's inability to control the ball late for why his team couldn't put the Nuggets away.

"The second half was not a good ball-handling half for us," said Boylan. "They turn those turnovers into points really quick. We knew they were going to come out with some more energy and more focus [and] we needed to respond and unfortunately we turned the ball over a few times, gave them a little bit of life and they used it and got us in the last five minutes."

Boylan also credited the Nuggets small-ball in the Denver win.

"They played small the whole second half, which caused a little bit of a problem for us," said Boylan. "Especially with the guys I like to have out on the floor. Sometimes unfortunately you can't have everyone out there because when teams are playing small like that, I like to try to stay big to make them pay for it, but then the game started to slip away from us and we had to re-adjust and match up to them a little bit more."

Faried finished +16 in the fourth and Gallo, Iguodala, Lawson, and Brewer were all +15 (Andre Miller was an even 0).

-The Nuggets only allowed a combined 24 points to Monta Ellis and Brandon Jennings, but Denver allowed an atrocious 35 points to Dalembert who was 17-21 on the night and a major force in the paint. Sam even took a heat check jumper (that he missed!).

-Brewer was amazing off the bench with some killer defense and a 20 points night on 6-13 shooting including 7-9 from the foul line.

-McGee said after the game that it's hard for him not to play late as he wants to be on the floor. In his first game back since the shin injury he logged nearly 18 minutes and put up 8 points, 5 rebounds, and 4 blocks. I thought he was pretty locked in during the second half and was a difference maker. McGee also was robbed of two points when he was called for basket interference when he clearly had a put-back dunk.

-Gallo and Lawson each went for 22 points and Wilson Chandler put up 10 rebounds off the bench in 21 minutes. Iggy had 5 assists on the night. Faried had a double-double with 13 points and 10 rebounds and a nasty collision with Larry Sanders. The status on Sanders was unknown immediately after the game - hope he is going to be fine.

We try to do a little extra for our readers from time-to-time - especially at our popular Stiffs Night Out events. And tonight we were able to do something very special for a Nuggets fan who came to love the team because of the head man George Karl.

Lauren Smalley from Gillespie, Illinois was in Denver for the weekend and has followed Karl since his days with the Supersonics. She played hoops herself and was a big Shawn Kemp fan. Her coaches pointed out Karl and Smalley took notice - she even wore #22 in his honor during her playing days.

Tonight we were able to help Lauren meet a man she has looked up to for quite some time and score her tickets to the game. Before the game Karl took some time to chat with Lauren and take a picture with her. And I can't help but to think that perhaps Lauren paid us all back by being the good luck charm at Pepsi Center tonight! 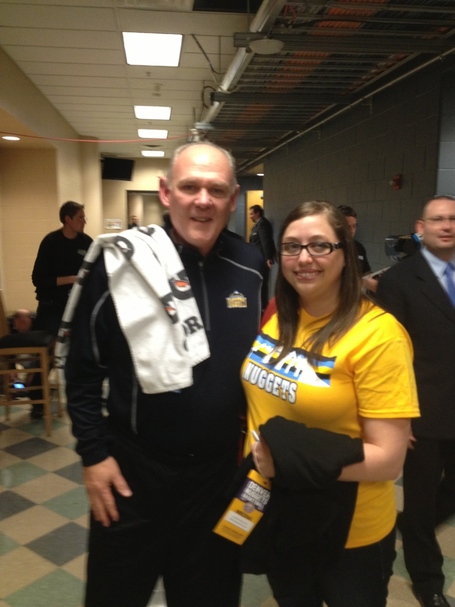