With the Nuggets playing another back-to-back away game, it will take all their energy to pull out a win in the hostile Staples Center against an excellent Clippers team.

What do they all have in common?

They're all excellent actors!

If there's one thing I absolutely despise about the modern NBA, it's the prevalence of flopping. It makes sense, then, that in Los Angeles, a town full of actors, its basketball team would feature a few. What's most frustrating, to me, is the simple fact that Paul and Griffin are two of the most highly talented players in the NBA. They don't even need to flop to be extremely tough matchups for any team in the league, but they do anyway. Vlade Divac's flops have nothing on some of the pratfalls performed by Paul and Griffin this season. Even head coach Doc Rivers recently called out the team as "pouting" and has been critical of the team's body language.

This year's Nuggets team has shown a tendency to let themselves get rattled by the refs. When calls aren't going their way - like against the Thunder most recently - the Nuggets get frustrated, taken out of their game, and (in Jordan Hamilton's case) even ejected. While it's certainly likely that the Nuggets will be playing 5 on 8 for much of tonight's game, they too can exploit the officiating by accentuating contact on their shots and drives to the lane. They definitely won't get the benefit of the whistle, lacking the star power the Clippers employ, but if there's one thing this Clippers team has shown this year it is that they are mediocre defensively.

Despite the shot-blocking prowess of DeAndre Jordan and the quick hands of Paul, the Clippers have a vulnerable underbelly on the defensive end of the floor. Other than Jordan, the Clippers are relatively slow-footed on the defensive end and do not have any shotblockers. The Nuggets should be able to take the ball inside all night long. However, if the Nuggets crash the glass too hard, they'll face the murderous transition offense of the Clippers and deflating off-glass alley oop dunks from Griffin.

To get the victory tonight, the Nuggets must perform a careful balancing act. They must equally weight the fatigue from last night's game against the Suns, their desire to vacuum up every available rebound, and the constant push to score their own easy buckets in transition. If the Nuggets can limit Paul and Griffin, they should be able to ride the strength of Nate Robinson and their other excellent reserves (including Hamilton, fresh off a 1-game suspension) to victory. It was supremely disconcerting to see how badly the Suns bench destroyed the Nuggets last night, but with Hamilton returning, the Nuggets can hopefully see some extra production from their second unit.

On another note, last night's loss to the Suns was the first game to make me truly angry at this team this season. They lead by 14 points at the half, and completely collapsed in the second. There is absolutely zero excuse for this team to have blown last night's game to the Suns, and the loss will go down as perhaps the worst of the season looking back. If the Nuggets don't win tonight, they'll have missed a big opportunity to move up in the standings.

Please enjoy this awesome image of the two starting lineups from one of our Nuggets fans from Germany, Dennis Kohler! Thanks Dennis! 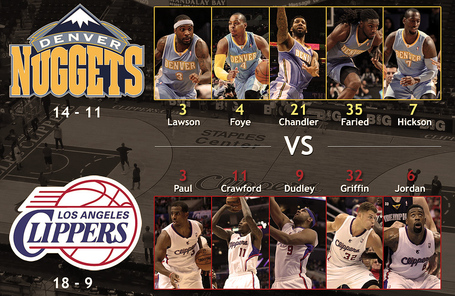