Note from Nate Timmons: Sensemaking has been providing us with excellent content and in-depth analysis on the Nuggets with his FanPosts. He'll be writing feature stories for us this season with video breakdowns and statistical analysis. We welcome him to the team at Denver Stiffs!

This post is a video breakdown follow up to our earlier story on how the Nuggets will defend the Pick and Roll under Brian Shaw.

Shaw has only coached two games thus far for the Nuggets, but he has so far proved to be an honest and open coach with the media. Nate Timmons talked with Shaw about how the Nuggets will defend the Pick and Roll after the Sacramento game and posted a great article here on Denver Stiffs. After reading it,  I thought I would find some video clips from the Nuggets first game to try and illustrate the points that Brian Shaw made in Timmons' article (all quotes are from that article unless otherwise stated).

As was mentioned in Timmons' post the Nuggets are handling Pick and Rolls in a different way with their power forwards and centers.

"With our fours, and their athletic ability and quickness, we want them to basically blitz or show on the screen-and-rolls and get back to their man." said Shaw.

This means that when Hickson's man (or Faried or Arthur's man) is setting the screen, that means Hickson must meet the guard on the other side to prevent dribble penetration and once he stops the guard and Ty Lawson is back to defend him after fighting through he screen, then Hickson has to get back to his man.

This first play gives a good example of what to do and what not to do in the same play. Darrell Arthur executes the show well keeping Isaiah Thomas high and is able to quickly recover to his man. Kenneth Faried is next to try and unfortunately gets it (almost comically) wrong. He jumps out too far and away from the screener leaving a giant lane for Thomas to drive towards the basket (to be fouled by Arthur who almost gets in position for a charge but shuffles to the left and is called for a foul). On the overhead replay you can really see how large the gap is that Faried creates by jumping out in the wrong direction on the show.

"Where our fives," said Shaw. "We want to keep them closer to the basket so they are in what we call a "drop". We like to handle the middle pick-and-roll between the ones [point guards] and the fives, between just those two players, so we want our ones to chase them basically into our centers and make them have to finish over our centers."

This means that when Timofey Mozgov's man (or JaVale McGee's man) is the screen setter that you won't often see Moz meet the guard up where the screen occurs. Instead, Moz will be a few feet away so the guard cannot use his quickness to get around the big center for an easy rim attacking opportunity, while Moz would be chasing from behind and could easily foul said guard.

This play is a short play (with an illegal screen called on Sacramento) that shows the different ‘drop' spacing well.

But what about the recovery? What is Mozgov supposed to do after he stops the guard?

"Timo's probably the best on our team, position wise, at just staying between the ball and the basket," said Shaw. "Being able to, what I call, sniff out the pickup; when the guard picks the ball up to get back to his man and let our guards challenge from behind."

The third play illustrates Timofey Mozgov moving backwards well to stay between the ball and basket, and he is able to block Thomas' shot easily.

The final play again shows Mozgov dropping and shows a guard (Evan Fournier) recovering and challenging a shot from behind. In this example despite the fact the defense followed the scheme well Greivis Vasquez makes the difficult shot.

While reviewing the game footage I noticed that in the space of three and a half minutes during the second quarter the Kings ran the same play for John Salmons on four occasions. The play is very "Mike Malone" (the Kings' head coach) and consists of the point guard passing to big man at the high post then diving to the corner to set a screen for Salmons. Salmons curls from the corner up through the first screen runs a screen handoff with the big man to receive the ball then receives a third screen as he curls to the other side of the court. 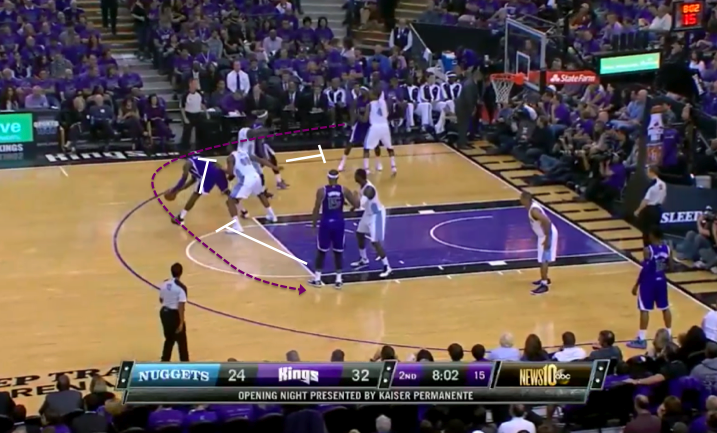 This play is good example of fighting through (watch Randy Foye) and also shows more examples of the Nuggets reaction to the pick and roll (as the third screen in the middle is basically a pick and roll action).

Play 1. Here Foye receives a hard screen from DeMarcus Cousins which puts him well behind Salmons. J.J. Hickson basically switches onto Salmons and then Arthur switches to Cousins as he cuts into the lane. The problem is that Foye tries to recover to his man as per the scheme and this leaves Patrick Patterson open for the three.

Play 2. This time Foye keeps up better with Salmons and catches up to him at the elbow. Unfortunately Hickson drops and stays with Salmons too, leaving Cousins open for the dish and dunk in the middle.

Play 3. Finally with a good show and recover the Nuggets are able to halt this action. Unfortunately the Kings have time to go to a second option: Cousins in the post, and he scores on JaVale McGee.

Play 4. With Vasquez at the point the Kings run a variation of the play where Vasquez cuts to the weakside after passing to the big man and only two screens are set for Salmons on the curl. You can see the center 'drop' in action here as McGee drops and Foye recovers and trys to challenges the shot from behind (which misses and is rebounded by Hickson on the weakside).

Weakside Defense at the end of the 4th Quarter

A point of frustration for Shaw early in the season has been players not following the schemes and doing things on their own. A tragic example of this came near the end of the Kings game when Sacramento were repeatedly feeding Cousins in the post. The footage of Shaw's postgame comments seem to be not longer available, so I will go with this summary from the game recap on Stiffs:

Shaw talked after the game how he doesn't like to double team and pointed out how Arthur's help defense, of a shot he had no chance of blocking, wound up costing the Nuggets a big bucket as Jason Thompson got an easy put-back dunk to give the Kings the 90-88 lead.

Shaw here is talking about a play where Arthur doubled from the weakside onto Cousins (contrary to the defensive scheme), which left Thompson open for a vital rebound and put back dunk. The play in question is the second shown in the clip and it is contrasted on either side by two very similar situations in which Arthur stuck to the scheme and the Nuggets held and the Kings came away empty handed.

At this early stage of the season under a new coach implementing very different concepts from the past, the Nuggets are a work in progress and each game is a learning experience for the players and coaches. The new defensive schemes have shown promise and if Denver can continue to make steady improvements the consistent execution should develop and Denver may find themselves with a tough 'playoff ready' defense.