The Nuggets have two high-energy, talented power forwards, both seemingly deserving of the starting spot. How will Brian Shaw maximize the talents of the two players?

It's hard to complain about the embarrassment of riches the Nuggets currently enjoy at the power forward spot. Kenneth Faried, J.J. Hickson, Darrell Arthur and Anthony Randolph are all capable of going off in any given game. The sheer rebounding ability at the position should give the Nuggets an advantage on the glass night in and night out. While Arthur and Randolph give the Nuggets a good amount of insurance against injury to either Faried or Hickson, neither looks to threaten for the starting job.

However, the question of whether or not the Nuggets should start Faried or Hickson at the 4 remains one of intense debate.

Both Faried and Hickson are two of the most dynamic, high-energy players at the position in the league. They are both phenomenal rebounders, play above the rim, have a high motor and by all accounts are great teammates on the floor and in the locker room. So who gets the nod? 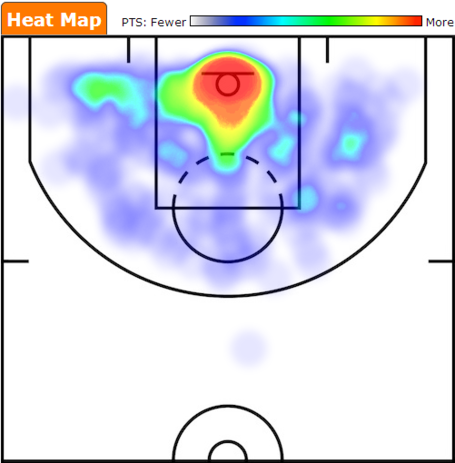 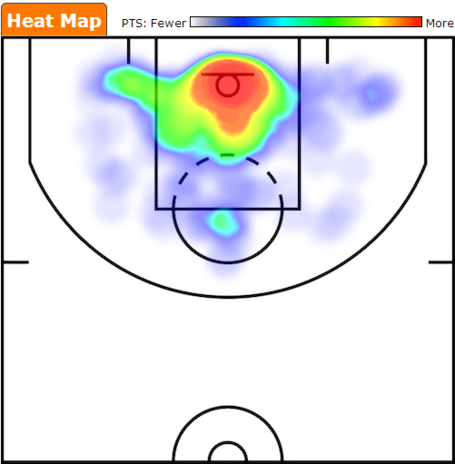 Dunks, dunks, dunks and more dunks. You want alley-oop dunks? Hickson and Faried have you covered. Quick cuts inside for a layup in the paint? Done. Leaking out for an athletic slam on the fast break? Can do. These are two of the best dunkers in the game. Yet one of the fatal flaws of last year's team was its inability to draw defenders away from the painted area on defense, which broke down the Nuggets' preferred style of play - easy baskets at the rim. Teams would sag off the Nuggets forwards, daring them to hit outside shots, and without Danilo Gallinari, they just didn't have an answer.

Hickson provides a potential solution to that problem as a sort-of stretch 4. Between 10 and 16 feet, Hickson shot a very respectable 46% on 91 attempts. Even better, between 16 feet and the 3 point line, Hickson hit 49% on 71 shots! If defenders aren't willing to close out on Hickson, he's shown that he can and will make wing jumpers or drive inside for a ferocious dunk. The numbers aren't so kind to Kenneth Faried - Faried shoots a Corey Brewer-esque 28% between 10 and 16 feet (on 51 shots)and a gross 30% from 16 feet to the arc (on 23 shots). Hickson even slightly edges out Faried at the rim, 67% to 66%.

Based upon last season's numbers (courtesy of basketball-reference.com), it's hard to argue that Faried is the better offensive player at this point in his young career. Hickson's more refined game simply provides that slightly longer range that will help pry open paint-clamped defenses, which should help ignite the Nuggets offense when they can't work the ball inside. However, if Faried can prove that Hakeem Olajuwon taught him the mystical secret of a consistent, short face-up jumper, this calculus could become much more difficult. For the time being, though...

Do I really have to talk about this? Yuck. Let me be blunt: both Faried and Hickson struggle with team defensive concepts and are often liabilities on the defensive end. Neither player has ever posted a defensive rating (DRTG) below 101 points per 100 possessions while they are on the floor - and, yes, while defensive rating is a product of team defense and less a measure of individual capability, their below-average rating at least suggests that they're not helping the team's defense that much. By way of contrast, Tim Duncan posted a 95, Roy Hibbert had a stalwart 97...you get the drift. Last season, Faried muddled through with a 102 while Hickson flailed an awful 106 DRTG. It might be argued that Hickson was playing "out of position" in Portland, but by all accounts, Hickson's defense has been unfavorably compared to a colander.

Both players need to work on their footwork. They're often late on rotations and don't quite seem to know exactly when they need to double or how to play the pick and roll. They don't play passing lanes well, and are often caught out of position when they need to close off lanes to the basket. Their post defense is suspect at best, which will leave the Nuggets struggling to defend against back to the basket post players.

On the upside, both Faried and Hickson are extremely athletic. By dint of sheer physical gifts, they are able to influence shots in ways few other players are able to. They are capable of chasing down streaking ballhandlers, swatting down attempts in the lane by guards and are not afraid to play very physically in the post. They both collect a good amount of defensive rebounds. Their strength and speed should let them be capable defenders on the perimeter, yet their poor positional awareness hampers their ability to influence shots well outside the paint.

I'm hoping that both Faried and Hickson improve their defense with better team concepts under Brian Shaw, but it's likely that defense will remain an issue through the season. In all, going into training camp...

I remember watching the Manimal's first basket - a no look, over the shoulder pass to an alley-oop dunk - as a Denver Nugget. At that moment, I knew that Faried was destined for great things with this team. He went on to become one of the biggest fan favorites at the Pepsi Center in a meteoric rise, even getting his own sound effect courtesy of DJ Bedz and the audio crew at Mt. Loud. He enters to wild cheers and exits to thunderous applause more often than not. He has developed a camaraderie with his teammates and the coaching staff, carrying a jubilant smile that rarely falls off and often spreads to his teammates.

Faried is a Nuggets draftee, has an endless, relentless drive and brings an infectious attitude of determination whether he's on the court or on the bench. It's a cliche in most cases to say that a player gives 110%, but Faried truly does - he never stops, and perhaps the only thing which limits his game is his own body. Just two seasons into his NBA career, Faried is only 23 years old and appears to have All-Star potential if his game continues to mature.

Now on his third NBA team in his fifth season, Hickson brings a solid hustling game of his own. He often can explode out of nowhere, and he was well-loved by fans in Portland. J.J. is widely perceived to be a great energy guy who pushes himself hard on the floor. Yet as another journeyman who joined the Nuggets from a rival squad (which stirs memories of another player who recently jilted the franchise), Hickson will need to truly show that he's committed to this team and not just looking for his next contract.

Ultimately, I believe that the power forward spot is Faried's to lose, despite claims that the Nuggets will be anywhere from awful to horrible on defense with Faried and McGee in at the same time. He has the familiarity with his teammates, the relentless drive to improve and has already earned his position under a notoriously rookie-unfriendly ex head coach George Karl. While I believe that Hickson is absolutely capable of starting - if not on this team, then definitely somewhere else - Faried will win out in training camp and open the season as the Nuggets starting power forward. There just isn't enough that separates Hickson to the point where he should start over a player the Nuggets are more comfortable with and has become the regular starter.

No matter which player gets the starting job, it presents a nightmare matchup for a lot of teams. Both players will abuse teams that cannot contend with two high-energy players cleaning the boards. The Nuggets essentially created a "Mega Faried" (or "Hyper Hickson", if you will) capable of regularly putting up 25/20/4 in 40 MPG by combining their largely redundant skillsets. While I believe both players are mature enough to accept an off the bench-role, Shaw and the coaching staff will need to carefully handle minute distribution for two players hungry to prove themselves.