To say that the Nuggets dominated the fourth quarter would be an understatement tonight. The Nuggets 37-18 explosion on both offense and defense was a total annihilation of the Golden State Warriors. And the Warriors were good tonight ... for three quarters.

"Golden State played well," said Nuggets head coach George Karl. "They got their three ball in the game; even when we covered it well they still made their share of them."

The Nuggets forced 7 turnovers in the final quarter and the pace in which the Nuggets played that final 12 minutes can only be described as "breakneck". As I said on Twitter, it looked like Andre Miller had been shot-gunnin' Red Bull on the sidelines before the final quarter as he came out like he was shot out of a cannon.

Denver's first possession was Miller racing to the rim for a layup. And the floodgates just opened from there as Denver was attacking all night.

"There was somewhat of a wear-and-tear going on out there," Karl said. "Consistently attacking the teeth of their defense, trying to find layups, and in the fourth quarter we got a lot of easy baskets too."

A whole big old bucket of easy buckets. Check out this shot chart from the fourth quarter for Denver ... 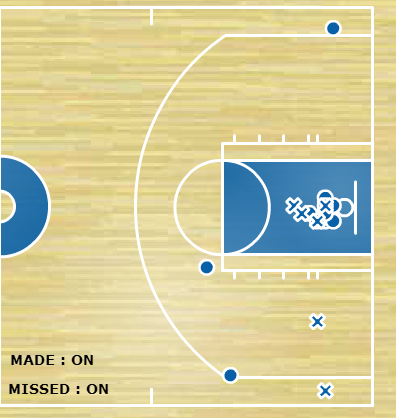 The above shows that Denver was 11-15 inside the paint in the final quarter - as a team they were 14-20 from the field and 2-3 from three point land. It was raining buckets. Kenneth Faried dunks, Miller layups, and Danilo Gallinari bombs. Corey Brewer was a perfect 3-3 in the period and led the team with 9 points in the fourth. C-Brew would finish with 13 points and his fellow bench-mob boys would also lend a hand in bench scoring.

Brewer, Wilson Chandler, Miller, and JaVale McGee would score 22 of Denver's 37 points in the final quarter. Gallo would add 8 points of his own and Faried got 5 points in the fourth. The scoring barrage was once again a product of the increased energy - especially on the defensive end.

"I'd have to say Andre's [Iguodala] defense on Jack was pretty incredible," said Karl. "We had two or three turnovers in a row that lifted us from a four or five point game to a double-digit game. And then we found the open man who made some threes down the stretch to make it an easy win. The stat sheet looks like it's an easy win, but it wasn't. I think we all know they are a pretty quality basketball team, they are playing at a high level, they are playing with a lot of confidence, and I think it's a really good win for us."

A good win indeed. And a win that gives Denver the tie-breaker come playoff seeding time over the Warriors. The Nuggets finish the regular season with a 3-1 series win against Mark Jackson's team.

"We gave them life by being careless with the basketball," said Jackson. "This is a team that feeds off that."

Did the Nuggets ever ...

Views you can use: Box Score

-We got our first look at the healthy Wilson Chandler tonight. We also got a great look at how Denver can use a nine man rotation. Chandler, Brewer, Miller, and McGee all saw 20+ minutes tonight off the bench. Denver's starters all saw 30+ minutes with the exception of Kosta Koufos who played 21 minutes (perfect for him on most nights).

-The Nuggets set up the Warriors with a trapping defense tonight. It was hit-or-miss throughout much of the game and very effective in the fourth quarter.

"I think their [Curry and Jack] guards have been scorers for most of their careers," said Karl. "Trying to trap them and just be aggressive, when you're playing kind of sleepy anything to get us aggressive. Anytime we get aggressive and get some confidence in the game with our defense we usually play at a high level."

Karl: "I thought it was a really good match-up for him. Kenneth [Faried] on [David] Lee is not my favorite match-up. Early in the game I just thought, you know what I'm going to throw Wilson out there for four or five minutes to get him a little run. The shot selection, he and I are going to have to talk about a little bit, but I like guys that have the ability to get 14 shots and never have a play run for them."

I really liked what we got to see from Chandler tonight. He was able to show off some shooting touch, rebounding, and defensive aggression. I wish he'd take the ball to the rim on a more regular basis and with more purpose to score, but that may come with the trust of his body coming back to him.

Another thing I noticed about Wilson tonight - he liked to change up how he was guarding Lee. Chandler would play him tough in the post and he was also switching up and fronting Lee (and Draymond Green) in the post and came over the top for a very timely steal in the opening minutes of the fourth quarter on Green.

Chandler: "I try to play him [Lee] tough. Honestly, I don't think there is any way to stop him, he's having a great All-Star season. He's going to score, so just try to make him take a lot of shots to try to score. I like to mix it up [post defense], front him and play behind just to give him different looks and keep him guessing. There's really no correct way to play him because he can do so much, he's even handed, and he has nice moves in the post."

Lee finished the game with 23 points and 13 rebounds, but he only scored 3 points and had 1 rebound in the final quarter.