As a lot of you know, I live Tweet during games and sometimes get into some heated debates where 140 characters is simply not enough to explain a concept or convey the point clearly. One point I've tried to make over and over again is a concept I first discussed where I explained the value of creating 2-on-1 advantages. I wanted to expand a little bit on that concept, as it's one of the most important concepts in understanding the difference between elite coaching and good coaching and the primary difference between a good team and a sustainable dynasty. Let's dive in after the jump ...

Studies have shown that in the NFL, innovation and designs are more important than individual talent and playmaking. Innovation is the process of combining knowledge to produce better designs, which we'll refer to as scheme. Some examples of offensive scheme are Phil Jackson's triangle offense or Mike D'Antoni's seven seconds or less offense. The most effective schemes, however, work to create numbers advantages, as it's very hard for one player to defend two, or 3 players to defend 4. Imagine 2 NCAA players on a fast break against 1 NBA player - it's hard for elite talent to make up for numbers advantages. Schematic advantage allows teams to further their advantage by drafting specialists, as they're not as dependent on talent discrepancies to win games. Your player profile looks like this:

Can hit an open corner 3 and has length and athleticism to defend - of which there are many guys who are fungible (Wilson Chandler, Thabo Sefalosha, Kawhi Leonard, Stephen Jackson, etc).

Needs the ability to create his own shot and both get off and make a 3 over an NBA level defender, needs length and athleticism to defend (Kobe Bryant, James Harden, Dwyane Wade).

In the first case, there are plenty of guys to choose from in the lower first round. In the second case, you need to identify and draft a top tier talent and athleticism, which can usually only be found in the top of the first round. Matt Bonner would be useless on most NBA teams as he's a liability on defense and he can't get his own shot. On the Spurs, he's really valuable as he shoots open 3's at an elite rate and they're able to schematically get him open looks.

There are several levels of strategic coaching. The first is "give the ball to my best players and hope they score baskets." The second is "let's try to design mismatches where we isolate a big guy on a small guy or a fast guy on a slow guy." Finally, there's schematic advantage where you deliberately create a numbers advantage or what I'll call a 2-on-1 situation. Dynasties are created when a team not only designs a better system but also combines the right human capital (players) to execute that system. It works because other teams can't simply copy the schematic design as they have to also acquire the right players for that scheme and it may take several player acquisition cycles. The team who innovated not only already has the human capital but they're perfecting the execution of the designs and further innovating.

A lot of people watch the Spurs' offense and all they see is that the Spurs get a lot of layups and wide-open 3's. Why does this happen? The answer is they deliberately create 2-on-1 advantages through a combination of first and foremost scheme, second tactics, third talent, and fourth game theory optimal actions. To understand what I'm talking about, let's look at the first 3 minutes of the 4th quarter in the Spurs' game 1 matchup against the Thunder. Thunder defenders that are forced to double, creating a numbers advantage elsewhere will be circled.

11:37 in the 4th - Ginobili comes off a screen with Harden chasing and immediately changes direction to attack the rim hard (tactics). Harden has no chance of both stopping and staying in front of Ginobili and Collison has to come double. Ginobili has essentially drawn 2 defenders leaving 3 defenders to defend 4 guys elsewhere. 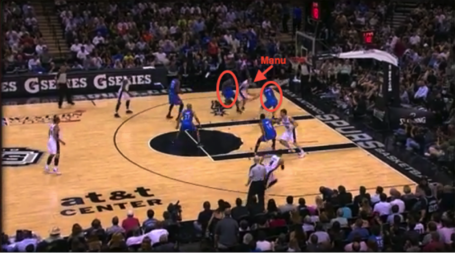 Ginobili finds the unguarded Danny Green(4) for an open 3 forcing a Cook closeout. Ginobili runs to the same area creating another numbers advantage (more tactics). Now Green pump-fakes (game theory optimal action) and beats Cook trying to closeout and Ginobili takes his vacated corner 3 spot leaving Cook to defend the Green drive and the Ginobili corner 3 as the screenshot below shows (notice that Cook can't defend both Green and Ginobili). Cook ends up taking Ginobili and they double off Fisher, who leaves Splitter. Ginobili finds the open Splitter for a layup. 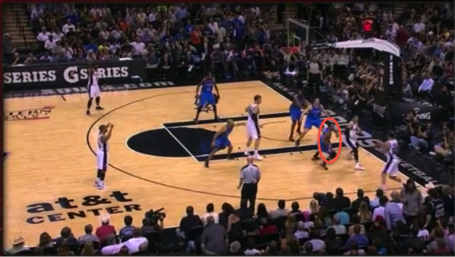 11:13 in the 4th - Ginobili attacks and draws 4 defenders. In this case, there are 3 guys left undefended. This is an example of individual talent creating a numbers advantage. The Spurs are unable to take advantage because of poor floor spacing allowing the Thunder to close out easily (notice the 3 Spurs bunched together at the top of the arc). When a team spaces the floor poorly, a 2-on-1 advantage for the defense is created and the defensive team is able to defend 2 offensive players with a single defender. 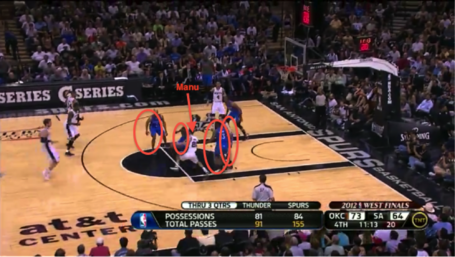 11:09 in the 4th - Splitter sets a screen for Neal, Harden tries to fight through it but is stuck behind Neal, forcing Collison to help. Splitter has an open lane and there are 3 open guys being defended by 2 defenders. Fisher is stuck under the basket to help on the Splitter cut to the basket leaving 1 guy to defend both Danny Green(4) and Tony Parker(9) from 3. 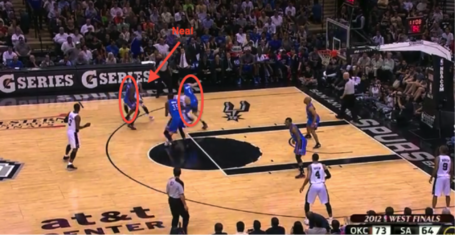 11:05 - The Thunder do a good job defending and Neal pulls it back out and passes to Jackson who pump fakes the 3 (game theory optimal action) and gets his defender in the air, effectively blowing by him and drawing 2 defenders (his own and Collison). He passes to a wide-open Splitter who has just been vacated by Collison and Fisher is left defending both a Splitter open lane to the basket and Parker corner 3. Result of this play was a layup by Splitter. 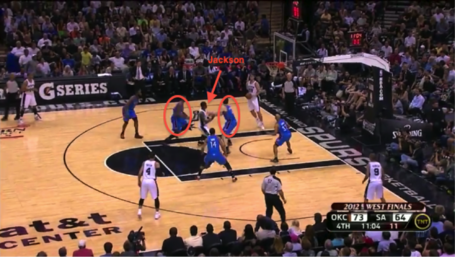 10:36 - Parker comes off a triple screen with Fisher chasing. Fisher has no shot of staying with him and Collison has to help. This is an example of play design (running Parker off screens) coupled with human capital (Parker's speed). Again, Parker is occupying 2 defenders while there are no defenders between Splitter and the basket. Parker hits an open Splitter cutting to the basket and he gets fouled. 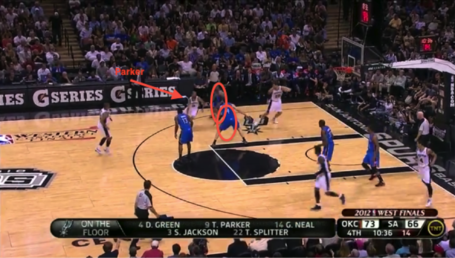 10:09 - Neal takes a Parker pass and instantly attacks Harden's closeout leaving him behind the play and forcing a decision from Durant - help on Neal or stay at home on the corner 3. Durant chooses to fake the help and stay at home and Neal has an easy layup. This works because good tactics, a crisp pass and an attack without hesitation, takes Harden out of the play forcing Durant to defend 2 players. 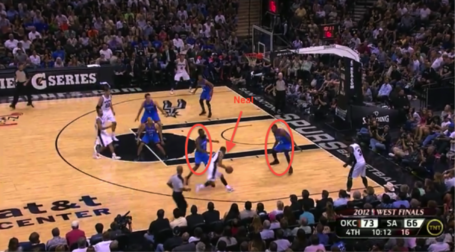 9:42 - A Splitter screen on Westbrook allows Parker to get in front of his defender forcing help from Fisher. Notice how Gary Neal (14) and Stephen Jackson (3) are on top of each other? Even though the Spurs schematically created a numbers advantage they were unable to take advantage because of poor floor spacing. Instead, they reset and go to post isolation offense (a rarity) with Collison on Splitter. The result of the play was a foul. 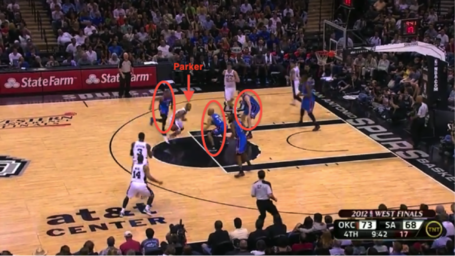 9:04 - This play is perhaps the most illustrative of the situations that the Spurs are able to create, schematically. Duncan screens for Parker who blows by Westbrook and also draws Collison (Duncan's defender). Notice how both guys are behind Parker and complete non-factors in the play. Both Fisher and Harden have to decide whether to leave a guy wide open for a corner 3 or prevent a Parker layup. Tony Parker has effectively drawn 4 defenders and taken 2 defenders out of a play, leaving 2 guys to defend 4 players. Result of this play was a wide open Danny Green corner 3 with no one within 5 feet - he missed but we're not results oriented, it's all about the process. 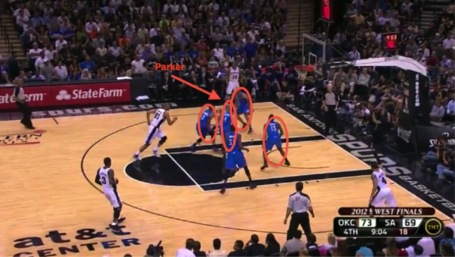 At one point in the game, the cameras showed Pop in the huddle and he shouted "PACE, PACE, PACE". Most people thought he meant run the ball up the floor quickly and play at a fast pace. What he actually meant was play fast in the half court - pump fake then drive quickly, fake a pass and attack a closeout, take a pass and make a move to the basket as these things create 2-on-1 advantages. All the concepts I outlined above only work if you execute them quickly. A second is the difference between leaving a defender behind you on a play and creating a numbers advantage and allowing him to recover.

What should the Thunder do? Well, it's easier said than done but they need to first understand what the Spurs are trying to do, that is, create a 2-on-1 advantage, and understand how they try to create these advantages. The Thunder should never, ever try to fight through a screen. A screen either needs to be switched or gone under. When a guy is schemed out of a play and ends up behind his man he needs to stop trailing and find the open shooter and run to him (if you've watched Jeremy Lin play he does a great job of this). Finally, they need to understand which players to close out hard on and which players to close out more carefully as the Spurs will take advantage of those situations to further create numbers advantages.

The Spurs tried to trade George Hill and Tony Parker last year - everyone thought they were lucky to keep Parker. While Parker is better than George Hill the Spurs essentially viewed the two, along with Gary Neal as interchangeable parts. From a human capital perspective, all they need is a guy with enough endurance to run his man around the court and enough quickness to attack off a screen to create a numbers advantage. He also needs to shoot somewhat decently from mid-range and 3-point land. There are tons of guys in the league who can create offense this way. Likewise, all their wing-players are essentially interchangeable.