Nuggets at Spurs Recap: I Need A Drink

The Nuggets once again flounder against a superior opponent and fall to the San Antonio Spurs.

Share All sharing options for: Nuggets at Spurs Recap: I Need A Drink 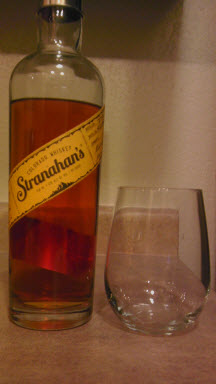 At least I had this to help soothe the burning sensation of having yet another team torch the Nuggets from 3. The San Antonio Spurs eclipsed their season high in points scored, and ended up posting 126 points to the Nuggets' 100.

This game was never close. The Spurs dismantled the Nuggets from start to finish, despite better nights from Ty Lawson (5-11, 13 pts, 4 ast) and Danilo Gallinari (7-13, 15 pts, 7 reb) than we've seen in recent games. From the getgo the Nuggets looked tired and disinterested, giving up 33 first quarter points. The Spurs led by as many as 30 points. The Nuggets also turned the ball over 21 times to the Spurs 14, leading to 18 points off turnovers for the Spurs.

Did anyone really expect Corey Brewer to keep up his torrid scoring pace? He once again couldn't throw a pea in the ocean (3-8, 11 pts, 5 reb). The Nuggets badly need consistent scoring off the bench, and Brewer simply cannot be relied upon to provide it. Jordan Hamilton (1-3, 4 pts, 2 ast) should be given more time (14 min) to give the Nuggets a chance to knock down some long shots. Evan Fournier (4-5, 10 pts, 2 ast) also made a case for more time (8 min) after the game was firmly in hand for the Spurs. Meanwhile, Manu Ginobili (7-10, 20 pts, 4 ast) and his 5 of 7 from 3 and cemented the victory alongside Tony Parker (7-13, 14 pts, 6 ast, 5 reb) who were clearly on top of their games tonight.

The Nuggets shot slightly better from the line (18-26, 69.2%) and got another solid night from Kenneth Faried (5-8, 14 pts, 5 reb), but those are about the only upsides to another embarrassing loss.

Up next are Rudy Gay, Zach Randolph, Marc Gasol and the Memphis Grizzlies in another tough matchup for the Nuggets. George Karl needs to figure out how to right the ship - and soon.