Andrew Feinstein, Jeff Morton, Colin Neilson, and myself would like to thank Denver Westword for naming Denver Stiffs the Best Sports Blog. We've come a long way around here.

From Andrew having his first controversial site asking for a certain coach to be removed, to me running Pickaxe and Roll, and to the two of us joining forcing on SB Nation with our different voices. To adding Jeff to the crew after his loud voice in the comment section drew our attention. And with Colin in the mix offering up his unique take on the team we all root for to hopefully win a title (some day!).

We certainly wouldn't be anything without you the reader. We've come to find that the Nuggets have quite a large WORLD WIDE following and getting to know many of you via the web and at Stiffs Night Out has been the most rewarding part. It's nice to get a little recognition for the work we put in, but above all it's great to have a place to talk Nuggets basketball.

Other sites that were up for the award: Predominantly Orange - a Broncos site run by our friend Kim Constantinesco, who has credentials with the team and runs her own crew of writers.

Mile High Report - the SB Nation Broncos site that covers the team from all angles.

Purple Row - the SB Nation site that gives you everything you want to know about the Colorado Rockies.

Roundball Mining Company - our friends and colleagues that also cover the Nuggets for ESPN's TrueHoop site. A site that I read daily and hope all of you read as well.

Certainly an honor to be included with that group and happy to take home the award this year! 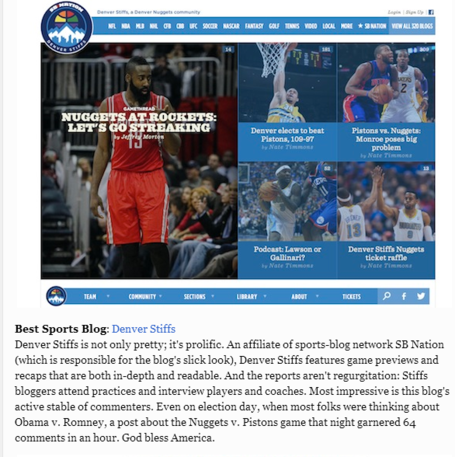