Out with the old navy blue uniforms and in with the bright skyline throwbacks, Nuggets set for new alternate look

After George Karl spoke with the media on hand for the Nuggets' media day - Josh Kroenke entered the room and unveiled the teams' big announcement: new alternate uniforms. Gone are the navy blue alternates from the Carmelo Anthony era and now we see a blend of the new school and old school. 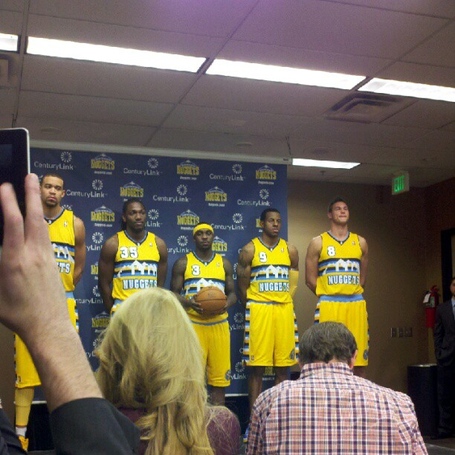 December:
January:
February:
March:
April:
A lot of fans in Nuggets Nation have been calling for the skyline uniforms that were featured in the 1980's to be brought back to the team. These uniforms hit on the throwback part a bit and also bring a brightness that will undeniably be seen on TV and during the games. JaVale McGee remarked how he had on the right shoes (bright yellow) for the occasion and how the uniforms compliment his skin tone. Andre Miller even approves of the new design, but wasn't sure how the rest of the league will react to the change.
I never was really on board with the navy blue alternates and those jerseys never seemed lucky to me. I remember the team losing a playoff series to the San Antonio Spurs in those navy blue unis and since then I've just felt they were unlucky. I'm a big fan of adding throwback style into a new school theme and really like these uniforms. Would they look good on my pasty skin? Probably not, but I'm also 30 years-old and past the point of wearing jerseys anyhow. Would I like to frame one to keep in my house? For sure!
Benjamin Hochman of the Denver Post said he thought he saw a little Marquette in the shorts, and he is right: take a look here: click here. Andrew Feinstein liked the old school blend and he has been one of the biggest voices in wanting to see a return to the skyline theme.
I'm waiting to hear what you Stiffs think of the new uniforms ... thoughts?