Catching up with Dikembe Mutombo...

Share All sharing options for: Catching up with Dikembe Mutombo...

15 years after meeting Dikembe Mutombo for the first time, I got to spend some time with the NBA's Global Ambassador.

I was interning in the public relations department of Turner Sports in Atlanta during the summer of 1996, and my boss at the time – former head of Turner Sports' corporate communications, Greg Hughes – comes into the small office allotted to me. "I’ve got good news and bad news," said Greg. "The good news is that Dikembe Mutombo is here and you’re going to meet him. The bad news is that he just signed with the Hawks." My heart sunk.

The Nuggets were coming off a gravely disappointing 1995-96 season, the only highlight of which was snapping the 72-win NBA Champion Chicago Bulls’ 17-game winning streak in Denver at mid-season. But Mutombo had delivered another solid performance in his fourth season in Denver, leading the NBA in blocked shots and being named to his third All-Star Game.

The issue at hand, as is typical in pro sports, was money. Mutombo’s camp wanted $55 million over five years and then-Nuggets president/head coach Bernie Bickerstaff refused to pay it (even though $11 million per year was actually the going rate for a starting, All-Star center in 1996 … Mutombo’s demands were hardly unreasonable). So Bickerstaff let Mutombo walk for nothing and it was the beginning of the end of Nuggets basketball. The franchise wouldn’t return to relevancy until Carmelo Anthony was drafted seven long years later. Little did I know at the time that Denver would lose more than just a great starting center.

When Mutombo arrived in Denver in 1991 he was an oddity. Born in Kinshasa, Democratic Republic of Congo (then known as Zaire), the 7’2" Mutombo found his way to Georgetown University and after a successful college career was drafted fourth overall by the Nuggets. Mutombo spoke English well but with his Congolese accent and deep baritone voice, he was hardly taken seriously when speaking. On the court, he was clumsy offensively but ruthlessly effective defensively ("Nobody enters the house of Mutombo!" we would chant in Denver in those years). Because he never took himself seriously, neither did we. But Denver fans loved him and by all accounts Mutombo liked Denver, even if he was a fish out of water in the Mile High City.

Today Mutombo is the NBA’s Global Ambassador, a position created specifically for him by NBA commissioner David Stern, and Mutombo represents the league at sports and non-sports events worldwide. His great passion remains Africa, as I detailed in my first column capturing my experience here in Johannesburg at the NBA’s Basketball Without Borders camp. But in any given week, Mutombo can be found at a diplomatic dinner in Washington, DC (remember he was an honored guest of president George W. Bush at the 2007 State of the Union address), an international cocktail party in New York, a basketball camp in Africa, visiting his $30 million hospital in Kinshasa, the Special Olympics in Greece or handing out food to starving citizens in Somalia, where he was a week ago.

But beyond the photo ops, handshakes and hugs, Mutombo is a deeply intellectual and thoughtful person. Something I’ve been experiencing first hand here in Johannesburg, having gotten to see the gentle giant up close throughout the camp. He still ridicules his friends and gets ridiculed constantly (Patrick Ewing is the leading candidate for the Mutombo Impersonation Award this week), but Mutombo is truly the NBA’s best global asset. He’s even (half serious) threatening to become Stern’s heir as commissioner some day.

On Friday, I got lucky enough to sit next to Mutombo at lunch and finally got to spend some one-on-one time with one of my favorite all-time Nuggets. We reminisced about the amazing 1993-94 eighth-seeded Nuggets squad that miraculously upset the first-seeded Seattle Supersonics in the postseason and then followed that up by almost becoming the first team in NBA history to erase an 0-3 deficit and win a playoff series. "When Seattle came back to Denver up 2-0, they acted like they won the championship. They didn’t know what hit them. And we almost had Utah. That series was crazy. Remember the fight between the Jazz owner and the Nuggets fan in Salt Lake?"

We talked about just how Mahmoud Abdul-Rauf used to be: "Mahmoud was my man. I loved that guy. He was so good, people don't realize how good he was." Head coach Dan Issel: "I liked Dan. He was a great coach for me." LaPhonso Ellis’ devastating knee injury in the summer of 1994: "I thought we’d be okay because we had Brian Williams. He was great. But it just didn’t happen." Teammate Scott Hastings: "Man, that guy was craaaaazy." And we talked about his overall experience in Denver, his first of several NBA cities: "I loved Denver. I never wanted to leave Denver."

And then Mutombo asked me about the whereabouts of his former teammate Kevin Brooks. "He was last seen coaching pro ball in New Zealand," I told Mutombo. "No way!" Mutombo didn’t believe me. 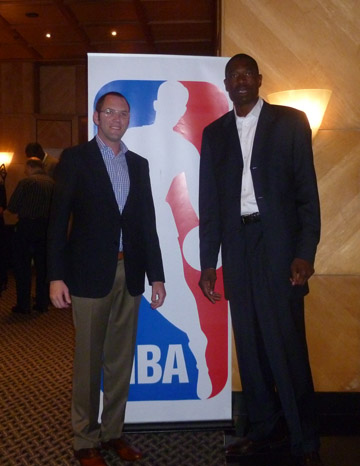 The Denver Stiff and Dikembe before the NBA's sponsorship reception.

But as is typical with any conversation with Mutombo, 20% was dedicated to basketball and 80% to African politics and history. Mutombo noted how the Bush Administration did more for Africa than any prior administration. We talked about American guilt when it comes to the Rwandan genocide and Mutombo was quick to point out that more people have been and are still being killed in the Congo, part of an endless civil war continually ignored by the west. We then shared our thoughts on Adam Hochschild’s impressively detailed yet horrifyingly depressing King Leopold’s Ghost (the premier published work on the history of Congo and one of the best books I’ve ever read) and then swapped other book recommendations. I recommended God Sleeps in Rwanda and he recommended Why Africa is Poor, which will be my next read.

Having to wrap up lunch and head out to the NBA’s Habitat for Humanity build here, we shook hands and agreed to reconnect later. For a man who has several million friends, I’m just hoping he can add one more.

At the beginning of this camp, I heard a story that encapsulates everything you need to know about Dikembe Mutombo, told by Frank Traore - a Burkina Faso native, a former BWB camper and a current NBA Africa employee. To the entire group of teenage campers here, Traore told the story of when he and four other Burkina Faso campers attended the BWB camp in Johannesburg in 2003. They had never been on an airplane before, and before leaving Johannesburg at the camp’s end there was an issue at the airport with one of his campmate countrymen on their way back to their home country. Apparently, one of the Burkina Faso kids was having difficulty with his reservation (his named didn’t match what was in the system) and the gate agent wouldn’t let him board the plane to go home.

On his way through the first class line to get on his own flight, Mutombo sees the commotion with the Burkina Faso campers and the gate agent. Instead of getting on his own plane and relaxing after a long camp filled with endless PR obligations, early morning events and late evening events, Mutombo inquires about the situation. When told of the issue, Mutombo leaves his first class line, goes back out to the check-in terminal and buys the kid from Burkina Faso a ticket to go home.