On Wednesday night, the Nuggets beat the Blazers by 19. On December 28th, they won by 18.

On Wednesday night, the Nuggets pulled down 48 rebounds compared to 33 for Portland. On December 28th, the rebounding differential was 45 to 38.

But unlike their December 28th matchup when the Nuggets exploded offensively in the third quarter, the Nuggets didn't mount their big lead until the fourth quarter. And Carmelo Anthony wasn't available for the December 28th game but did play on Wednesday night. And pretty efficiently actually, although he didn't shoot .500, something he's done just once in the last six games.

I had the privilege of watching Wednesday's action from the first row behind the Portland bench where I sat with Uncle Marty - aka "The Nuggets Curmudgeon." While the Curmudgeon scoffed at the Nuggets lack of height and their inability to get Melo the ball early, he enjoyed the game quite a bit. Especially when supermascot Rocky rubbed his bald head which immediately led to J.R. Smith's incredible put-back-dunk of Arron Afflalo's missed layup early in the fourth quarter that put a stamp on the game.

Here's a rundown of the game from our Not-So-Cheap-Seats, with additional commentary provided by the Nuggets Curmudgeon himself...

...I didn't know I'd be getting seats right behind the Blazers bench until shortly before tipoff. Had I known, I'd have been sure to hand deliver the Denver Stiffs Hall of Fame Lifetime Achievement Award to current Blazers assistant - and former Nugget franchise destroyer - Bernie Bickerstaff.

...seeing the giant Joel Pryzbilla starting for Portland, I couldn't help but imagine him starting at center for the Nuggets so we could move Nene to power forward. I have to believe that a lineup of Big Pryz plus Nene, Melo, Chauncey Billups and Afflalo would make the Nuggets among the Western Conference's top three or four teams. That'showclose the Nuggets are to being among the NBA's true elite.

...Kenyon Martin was introduced as being from "Oakland, Texas" but not the University of Cincinnati...weird.

...when Carmelo Anthony's name was announced, he received neither boos nor cheers but instead, pure indifference.

...the Curmudgeon comments on former NBA player Haywoode Workman being among the officiating crew:

"Haywoode Workman couldn't play in the NBA so he decided to get even with the players. You know what they say, those who can't do teach and those who can't teach referee."

"For the 98th straight game, the two tallest players are on the other team."

...for the first quarter at least, Portland had a very enthusiastic bench.

...Chris "Birdman" Andersen got introduced late in the quarter and received a raucous reception from the Pepsi Center crowd. Denverites clearly love the Birdman.

...Al Harrington looks fatter in person than he does on TV. And check out this pre-game locker room shot of (literally) "Big" Al that I caught on Altitude's broadcast of the Nets game from Monday. He's either eating a hot dog or a cheeseburger to go along with the french fries. Do you still think guaranteed contracts aren't a problem in the NBA?? 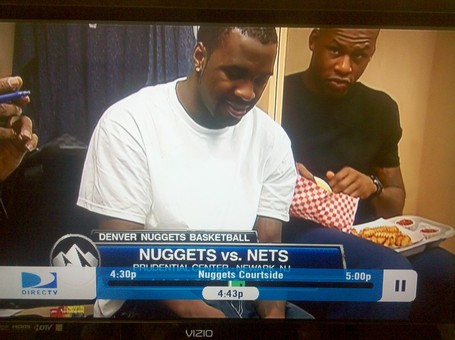 ...speaking of being fat and out-of-shape, the Curmudgeon offered his opinion on the Blazers' aging point guard Andre Miller:

"Andre Miller looks old and slow...kind of like Chauncey."

...the in-game Pepsi Center crew proved that they do possess some creativity as they showed clips of Bill Murray's amazing Groundhog Day movie.

...the Nuggets were dominating the boards, but out-rebounding Portland didn't make a dent in the score. Said the Curmudgeon:

"How could a team have double the rebounds at 23-12 and be losing?"

...Kenyon Martin continues to look great physically (the opposite of Big Al) and I noticed that as soon as he grabs a rebound, he immediately looks up court to throw an outlet pass and spark a fast break. And even though K-Mart had an embarrassing bank shot three-pointer in the third quarter that went in (and he acted like he knew it would go in), you have to love K-Mart's play right now.

...Melo had an amazing pass to Nene for a wide-open dunk...until Pryzbilla came over with an amazing blocked shot. Putting one's wrist at risk to block a big man dunking is a bold move, hence why I wish Pryz anchored center for the Nuggets.

...Chauncey started heating up in the third quarter and his solid play continues. Chauncey should be silencing many of his critics (including the Curmudgeon) by now.

...it's hard to appreciate just how great J.R. Smith's ball-handling skills are until you see him up close. It's amazing how naturally the game comes to J.R.

...Melo's reverse alley-oop was nothing short of pure awesomeness.

...Big Al played admirably but he couldn't get off the ground when he tried to jump and was laboring all night on his bad feet, the result of plantar fasciitis which is exacerbated by...you guessed it...being too heavy. Maybe Big Al should take his body as seriously as K-Mart does and get himself into shape.

...as mentioned above, Rocky rubbed the Curmudgeon's head and soon thereafter J.R. had the play of the game: his put-back-dunk off Afflalo's missed layup. The crowd erupted.

...the Nuggets had great passing throughout the fourth quarter.

...future Nugget (ok, I had to) Nicolas Batum has a great touch.

...at the game's end, Melo, J.R. and former Nugget / current Blazer Marcus Camby had a long exchange on the court. You could tell these guys still have great affection for each other. Every time I see Camby, I long for the team that should-have-been with Camby anchoring center alongside Nene and Melo with K-Mart coming off the bench. That would have been the Western Conference's deepest and meanest frontline from 2004 through 2008, but they and we were robbed due to injuries.

...with the Nuggets winning the game in a landslide, I turned to the Curmudgeon for commentary:

"They're still the Denver Midgets!"

-Nene: The Nuggets awarded the Player of the Game to J.R., but to everyone in the stands it was clearly Nene who owned the night. 9-13 shooting for 22 points plus 10 rebounds, three assists, one steal and one block. Just a great overall game by the big fella. Watching Nene play great I began to wonder: um, why didn't we offer this guy an extension just as Melo was offered an extension last summer?

-Andre Miller: Miller proved the Curmudgeon right by shooting a horrid 3-14 from the floor and turning the ball over five times.

Even though Portland was playing the second of a back-to-back, we can't overlook how dangerous the Nuggets are when they put forth a balanced attack and all players are involved in the offense.