I'll update this post with more info as it comes out. But while there has been nothing going on with the Nuggets lately, the new Nuggets regime is showing some signs of life with their recent training camp invitations. Let's discuss what we know about training camp so far and the final remaining roster spot that's at stake.

The Nuggets have 12 players signed to contracts and must add one more by the end of October. This will be a minimum salary contract and it's likely to be an unguaranteed one given to some young player out of training camp. Could one of their three training camp invitees score that 13th spot? 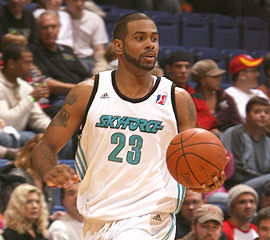 I remember watching Gary Forbes play two years ago on the D-League select summer-league team, against a very green Ty Lawson and ex-Nugget Sonny Weems. Forbes stood out because he was good and played both guard positions as well as small forward. I specifically remember him outplaying Weems that game, despite Coby Karl and Ty Lawson later winning the game for us. He's a 25 year old shooting guard out of UMASS with good size - 6'7" and 220 pound frame. He played one year in the D-League where he was one of the best scorers and a good three-point shooter. Last year he played in Israel, where he led that league in scoring with a 20.3 ppg average and got a lot of rebounds for a guard (8.7 rpg).

Forbes played summer league with the Rockets this year, where he likely earned his invite to Nuggets camp. It's hard to know if he'll work out in the NBA or not since he's never played there, but as far as unknowns go the Nuggets could do a lot worse. The guy has a lot of potential. ESPN's David Thorpe (a really smart guy) had this to say about him during summer league

Gary Forbes with a long catch and shoot 3. If he's not an NBA player, I'll quit tweeting forever.

I think what this also means is the end of all hopes for Coby Karl returning to the Nuggets. It was rumored he might be brought back, but I'm almost certain if we wanted him it would be Coby getting the training camp invite first. We have too many guards in camp now and no one who can even play center. I would count on the Nuggets hopefully bringing in at least two big men into training camp or I don't see how they will practice. Bringing in more guards like Forbes for tryouts is yet another sign of a likely J.R. Smith trade in the near future.

I haven't actually seen him play. The last few years Sims, along with guys like Dwayne Jones, has been at the top of the list for teams looking to hire a fill-in center. So he's been around the NBA as a "plan C" big man for four different teams, but never really played. The Nuggets need big bodies in camp to practice and Sims can fill that role. He is probably better than Brian Butch and will take over his longshot chance at making an impact.

A complete unknown who was undoubtedly the biggest surprise of summer league. He is a 6'7" forward, but was primarily an inside player for Jamahl Mosley's summer Nuggets. He started every contest and after Brian Butch went down became even more of an impact player as the best defender on that team. He is very athletic and able to finish in traffic. He ran the court well and was a favorite target of Ty Lawson's in transition. Lawson in fact called Edwards making the team back in July. He's like a Dahntay Jones in terms of the athleticism and hustle he brings on defense, but Edwards has actually shown scoring ability too. He shot over 60% in both summer league and his rookie season in the D-league last year. I'm going to go out on a limb and give him the slight edge to Shane for winning this roster spot. If he can reproduce even a little of the success he had with Lawson in summer league, they won't be able to keep him off the floor. Definitely a very versatile player.

According to hoopshype (hvino linked the article in a fanpost), Ely has gotten an invite to Nuggets camp. It's a bit of a strange move if you ask me, but as I mentioned earlier Denver is really going to struggle to run practice drills without more able bodied big men in training camp. It's important to note that this isn't the first time the Nugs have registered interest in Ely, he was rumored to have gotten a look after the trade deadline last year, when Denver came close to signing Brian Cook following Kenyon Martin's knee injury. I didn't believe it and I'm freaking shocked it was actually true

If you are a fan of statistical analysis, there's nothing to indicate the 32 year old fills any need for the Nuggets roster. The most troubling part to me - Ely has been out of work for the past year. He couldn't find a spot on a team last year and as far as I know didn't play overseas or anywhere else. He's just been in limbo. It's been the better part of two years since he's seen NBA competition.

He transferred after his freshman year though so my information might be a little dated. Coming out of high school, he was already big guy (6’10", 6’11") with a good frame and very good athleticism. He was a 4-star recruit by most publications, ranging anywhere from 3 to about 15 as far as center prospects. He was extremely raw as you might expect from someone from Great Britain. His biggest weaknesses at the time were understanding the flow of the game (where to move, when to move, fouls) and the lack of an offensive skill set.

Assuming he’s developed some sort of low post game offensively, he’s athletic enough to be a good defender. If I had to make a comp though, a slightly shorter but bulkier Johan Petro comes to mind. I see his ceiling as a 5th big unless he’s made serious progress. He’s already 25 so it’s unlikely he’s going to make any sort of quantum leap to become any sort of reliable rotation player.

The guy wasn't too great in college and turned in a wholly pedestrian performance in summer league with the Knicks. He's turning 25 very soon and doesn't look to be a ready made NBA rookie by a longshot. Another big body in camp can't hurt. Nuggets have pretty good balance with camp coming up in 2 days now

I'm going to go call it now: I think one of these players will make the team and contribute next year. I don't trust this already thin team to stay healthy. I also don't believe the Nuggets are giving out another guaranteed contract even for the minimum. Compared to the rest of the offseason the Nuggets did a pretty good job assembling the training camp roster so far. I expect this team to be pretty good in the preseason and one of these guys to really shine.