Nuggets are the vultures in the NBA food chain...

Share All sharing options for: Nuggets are the vultures in the NBA food chain... 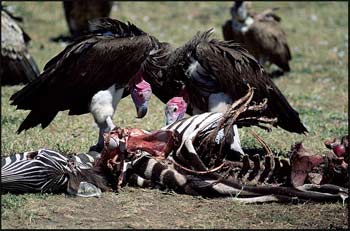 Having just gotten back from an incredible three-week trip to Africa, I think I've found the Nuggets place in the pecking order of the 2010 free agency period.

First off, it's great to be back.  I want to sincerely thank Nate for running the site solo in my absence and to the great readers of this site who have been writing extensively during the draft and the free agent period thus far.  Traveling through South Africa, Kenya and Rwanda (more on that to come tomorrow) at times I had great internet access and other times none whatsoever.  But I was able to keep tabs on the Nuggets doing nothing in the draft, the Carmelo Anthony situation (I was glad to see the Nuggets offer as I advocated for a month ago) and various other news reports that have come out our Nuggets.  In other words, I may have been away was never totally out of the loop.

As of this morning, ESPN is reporting that Chris Bosh will be joining Dwyane Wade in Miami and that it's likely LeBron James will be staying in Cleveland.  The news of these three players ultimate landing places is, of course, the main event in a free agency period filled with undercard activity: such as Amare Stoudemire signing with the Knicks (which will be Antonio McDyess 2.0 for them...you heard it here first), Joe Johnson remaining with the Hawks, the overpayments now due to Hakim Warrick, Amir Johnson and Darko Milicic (really, David Kahn, really?) and so on.  And as we expected - and thus shouldn't be surprised or genuinely disappointed, either - the Nuggets have been sitting on the sidelines for all this activity, waiting for something to break their way.

With the Nuggets never being far from my mind, while on safari in Kenya it dawned on me: the Nuggets are the vultures in the NBA food chain.  On safari, I was fortunate enough to catch the annual wildebeest migration (for any of you who watch Animal Planet, the National Geographic Channel or the Discovery Channel, you know exactly what this is) during which over 1,000,000 wildebeest travel from the Masai Mara game preserve south to the Serengeti preserve, attempting to avoid lethal predators throughout their journey.

Like the 2010 NBA free agency market, the wildebeest migration is a boon for those willing and able to hunt proactively.  With so many wildebeest to choose from, the lions, cheetahs, leopards and crocodiles get their pick of the litter and feast on the wildebeest accordingly.  As our safari guide put it: "this is fiesta time" for the predators.  And for many NBA teams, the summer of 2010 will be fiesta time,  as well.

Not so for the Denver Nuggets.

Thanks to a bloated payroll that includes six players salaries - Melo, Chauncey Billups, Kenyon Martin, Nene, J.R. Smith and Chris Andersen - that alone exceed the NBA's luxury tax threshold, the Nuggets won't be playing the role of predator this summer but rather the role of scavenger.  And I'm not talking hyena or jackal-type scavengers who get first dibs after the lions, cheetahs, leopards and crocs are done having theirs.  I'm thinking the Nuggets are essentially vultures, the ones who get whatever scraps are leftover from the rest.

Like the African vulture, the Nuggets must continue to circle high above the free agency period, constantly looking down for a window of opportunity with which to exert themselves for a feeding.  So after LeBron, Wade, Bosh, Joe Johnson, Stoudemire, David Lee, Carlos Boozer and Rudy Gay go to the most able predators, and then the likes of Milicic, Warrick, Drew Gooden, John Salmons and Amir Johnson go to the next tier of hunters, all that will be left will be nominal scraps to fight over.

To the Nuggets credit, in recent offseasons they've excelled in the role of the NBA's vulture franchise.  In 2008 they picked Dahntay Jones, Renaldo Balkman and Chris Andersen off the NBA's scrap heap and last summer they were able to add Arron Afflalo and Joey Graham despite being capped-out.  Finding deals that others aren't able to find has been rumored to be vice president of basketball operations Mark Warkentien's specialty but, of course, Wark may not be with us much longer.  Who will source these deals in the future?  Or even this summer for that matter should Wark sign elsewhere?

So while at times it drove me nuts to be far away from the NBA Draft and the NBA's most frenzied free agent period in league history, I certainly didn't miss anything as far as our Nuggets are concerned.  Because when you're relegated to the role of vulture, you're forced to stay above the fray, be patient and hope the right opportunity comes along that others don't see.

Otherwise, you're in for a long, painful winter after the summer fiesta has come and gone.