Share All sharing options for: Farewell Johan Petro, we barely knew you

The Nuggets, in desperate need of big men, watched as their only seven-footer on the roster last season signed a deal with the New Jersey Nets this past weekend. The famous saying goes - you never know what you've got until it's gone, and Petro now gets a chance to show what kind of player he can be as Brook Lopez's backup.

The man that Dahntay Jones dubbed Frenchy signed a 3-year $10 million deal with the Nets, as reported by Chris Tomasson of Fanhouse. Petro will get a nice pay increase from the $884,881 league minimum he played for last season to somewhere around $3.3 million with New Jersey this season.

Before the 2009-10 season, the Nuggets did not make a $2.8 million qualifying offer to Petro, thus making him an unrestricted free agent. Unable to land a deal last offseason, Petro had to gamble and played for the league minimum with Denver. The Nuggets also gambled and didn't try to work out a multi-year offer with Petro last year and risked him earning a nice raise once his one-year deal ran out. The Nets, who missed out on all the big name free agents, were willing and able to overpay for Petro because of their salary cap room and you have to congratulate Petro on landing some job security with a cloudy NBA future ahead.

So, while the Nuggets might have had to reach a little deeper for Petro last season and offered him a fair multi-year deal, it certainly would have paid off and Denver could have locked the 24 year-old up to their own 3-year deal and perhaps not have had to spend $10 million to do so.

The old coulda, woulda, shoulda of sports business decisions. Well, Petro is now gone and the Nuggets are still circling the free-agent prey like the vultures Feinstein referred to them as. One name being thrown as becoming a possible Nugget is that of Louis Amundson. Let's take a quick look at how Petro and Amundson stacked up last season:

By looking at those numbers, while they don't tell the whole story about either player, you'd have to say they are pretty similar in what they give you on the floor. Increase both guys' role just a little bit to roughly 15-20 minutes per game and the numbers could look a little better. I don't think either player can be a 20+ minutes a night guy on a consistent basis if your team is gunning for a title, but some nights they may have it going and they can give you more minutes than usual. What I do think both guys have in common is that if used right, they can be major factors for their team.

Nuggets fans saw Chirs Birdman Andersen's role increase last season and the results were not pretty. Bird is best suited for 15-20 minutes per game and can give you a little more on some nights when he's in a groove, but he's at his best when he can come in and just play like a mad man. Petro did show last season that he can get a little lost in the flow of the game, but at just 24 years-old he still has a window for improvement and could see his minutes increase over the next few seasons depending on his development.

What will be interesting is the contract that Amundson signs. There is no doubt other teams pursuing Amundson and somebody might have to overpay to get him. If Denver can sign Amundson for less than $3.3 million per season then they saved some cash, but it's likely that with teams hungry for energetic big men that Lou might get a deal that is worth even more than Petro's ... and heck his stats show he should get at least the same deal.

I'm getting a little off topic ...

I am sad that Petro wont be on the team next season, sure the Nuggets could use him and he did show improvement on the court. But I think Petro had a personality that we as fans didn't totally get to see. If you follow Twitter at all then you probably know Petro is a popular guy. His account Frenchi27 (he'll wear 27 for the Nets too) has over 324,400 followers receiving every one of his Tweets. To show how crazy that is ... consider that Carmelo Anthony (205,000+), J.R. Smith (44,600+), Ty Lawson (29,500+), and Renaldo Balkman (2,600+) don't even combine for over 300,000 followers and you can see that something is special about Petro.

While you always hate to lose a player that can help you out on the floor, there is also something to be said about a guy who is good for the locker room and a guy who teammates hang out with away from the basketball arenas. Petro wasn't around long enough for the local media to really tell us more about who he is and what he meant to the team and it's sad we wont get to find out more about the mysteriously popular Petro.

Johan did leave his mark last season as he filled in for the injured Kenyon Martin late in the year. Over the last 20 games of the 2009-10 regular season Petro played over 11 minutes in 18 of those games, over 15 minutes in 13 games, and over 20 minutes in 8 games. He recorded two double-doubles in that span and had five games of 7+ rebounds while the Nuggets went 12-8 in those contests, 12-7 if you take out the game where Petro only played 4 meaningless minutes, and 12-6 when you take out the game that he didn't play in against the Knicks. We'll be left wondering what would have happened this season when Petro's role certainly would have been increased with K-Mart and Bird on the shelf for awhile.

Petro's size will always make him a rebounder, his athleticism will allow him an advantage over other players his size, his shooting range can stretch to an arc just outside the foul line, and his height will make smaller guys alter their shots at the rim.

With Denver, Petro was a true center. With New Jersey he could play as the other twin tower if he's on the floor at the same time as Brook Lopez. Petro's possibilities are still fairly endless as his two biggest assets remain true with his youth and good work ethic.

Denver will miss you Petro, best of luck with the Nets ... we barely knew you. 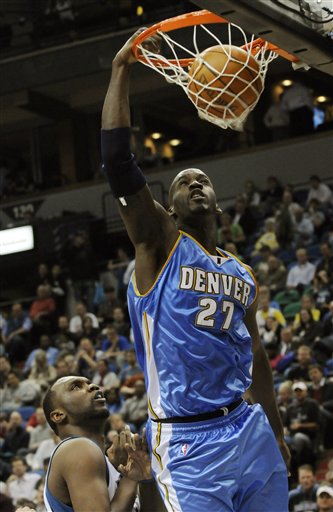