Arron Afflalo stepped into the starting shooting guard role with the Nuggets last season, his first with the team, and he might hang onto that role in Denver for quite awhile.

Contract status: 2 more seasons and $4.9 million left on his contract. In the 2011-12 offseason the Nuggets can make a $2.9 million qualifying offer to Afflalo, thus making him a restricted free agent.

Overview of 2009-10 season: When Afflalo came to the Nuggets last offseason via a trade with the Detroit Pistons, his arrival seemed to be signify that the hole left by Dahntay Jones signing in Indiana, was now filled. But the Nuggets uncovered a gem when they brought Afflalo aboard. Check it out ... Jones made $2.5 million with the Pacers last season ... Afflalo just $1.08 million in Denver. Jones scored 10.2 point per game, but was leaned on heavily for a lottery bound team while Afflalo scored 8.8 ppg for a team battling for a championship. Jones was 29 years old last season ... Afflalo just 24 years old. Jones shot 12.5% from three-point land (4-32) while Afflalo shot 43.4% from downtown (108-249) allowing Denver to stretch the floor and create more space inside for its big men. Afflalo showed he had more of an all around game that many gave him credit for, drew the assignment of guarding the toughest scorers in the league on a nightly basis and was praised by the coaching staff as one of the hardest working players on the team. 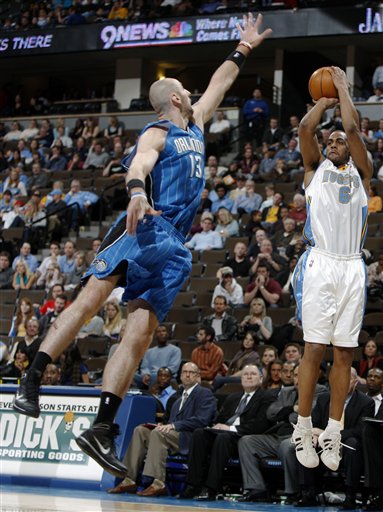 Positives / What he brings: As mentioned above, Afflalo appears to be a tireless worker ... a player bent on proving that he not only belongs in the League, but that he can shine in it. Afflalo was first praised by the Nuggets organization for being a defensive minded player, but he kept talking about his all around game. Afflalo showed Nuggets fans his long-range distance by making 108 three-pointers last season ... he made 53 threes his previous two seasons combined in Detroit. Afflalo also showed his durability by playing all 82 games, encompassing 2,230 minutes - better than his 1,234 minutes last season and 970 his rookie season. AAA provided more than just insurance for the Nuggets than a replacement for Jones, he fit right into the starting lineup and gives the Nuggets a consistent guard who can defend, hit the outside shot and keep getting better.

Negatives / What needs to improve: Afflalo hit just 73% of his foul shots last season and I'd be willing to bet that that percentage eats him up as well. Arron doesn't get to the foul line often as he was mainly a catch-and-shoot guy last season, but I'd be surprised if we don't see an improvement from the foul line next year. In working on his all around game I think we'll also see some additional improvement in Afflalo's mid-range and shooting off the dribble game - both of which Afflalo didn't seem completely comfortable in doing last season as much as one would like. My biggest gripe with Afflalo isn't even with his game ... it's the man's shoes! How he plays in Adidas Superstar 2Gs is beyond me. So, while Kobe Bryant worked with Nike to customize his sneaker, Afflalo is playing in a shoe that is mainly used for "casual" wear. Could it be the shoes? I'd love to see the young guard upgrade his footwear next year ... I might be losing my mind.

Outlook for 2009-10 season: As much as I love Afflalo's work ethic and game, there just might not be enough minutes available for all the Nuggets guards and a guy who isn't flashy like Afflalo might get squeezed out if he's not careful. The Nuggets might be looking to trade a guard this offseason and some fans think J.R. Smith could be the odd man out, but we are also hearing that Denver might trade rookie gem Ty Lawson if the right opportunity comes along. If Smith is still on the roster next season that means Afflalo's role might again be a bit limited as the Nuggets like Smith's scoring threat, but Smith might be wearing out his welcome in Denver and that could benefit Afflalo. Arron showed he needs to be on the floor more next year and keeping him on the bench might keep getting harder to do.