How the draft lottery could affect the Nuggets...

Share All sharing options for: How the draft lottery could affect the Nuggets... 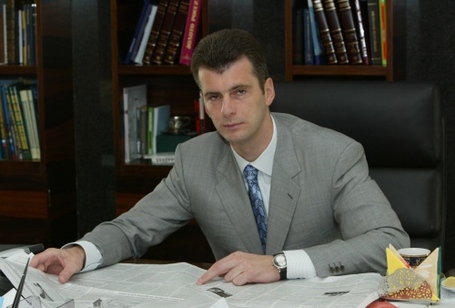 Watching the NBA Draft Lottery just isn't the same without seeing Bernie Bickerstaff or Dan Issel in attendance on behalf of the Nuggets.  But that doesn't mean tonight's results won't potentially impact our beloved franchise.

Covering the lottery here a few years ago, I created a verb called "Nuggeted."  Nuggeted refers to a team that has the worst or second-worst record in the NBA but fails to land a top-two pick in the draft.  Those of us who sat through the lean seasons in Nuggets Nation between 1990 and 2003 know exactly what I'm talking about.

Tonight, it was new New Jersey Nets owner (and my new personal hero) Mikhail Prokhorov's turn to get Nuggeted, as his 12-win Nets ended up with the third overall pick and on the outside-looking-in for the John Wall / Evan Turner debate.  Luckily for Denver fans, no Western Conference team landed inside the top-three and Nuggets fans had a collective sigh of relief when the Jazz - who hold the Knicks number one pick this year - ended up ninth.

That said, this draft could impact the Nuggets in several ways.  For example, if the Golden State Warriors - one of the Nuggets few possible trading partners for J.R. Smith - draft DeMarcus Cousins at the sixth spot, does that mean the Nuggets could poach big men like Ronny Turiaf or Brandan Wright.  Or if the Hornets go for a seven-foot Lithuanian, as NBADraft.net is predicting (today), does that mean Emeka Okafor plus James Posey becomes available in exchange for Kenyon Martin's contract?  I'm sure these conversations are happening at Nuggets headquarters right now.

Of great concern to our Nuggets should be the Clippers and Jazz drafting at the eight and nine spots.  The Clippers may very well be snake bit again next season, but that doesn't change the fact that they'll be adding a lottery pick to a lineup already including Chris Kaman, Baron Davis, Eric Gordon and (in theory) Blake Griffin.  Oh, and tons of cap room, too.  It's like the Clippers got a mulligan on all of last season thanks to Griffin's injury.

And the Jazz - if they're smart - will re-sign Carlos Boozer this summer and use that pick to shore up their bench strength.  As always, there's no rest for the weary in the Western Conference.

Now that we know how the draft order is laid out, we should start speculating about how the Nuggets can get into this draft.  If we're going to part with Smith or K-Mart as many of the fans are clamoring for, think about teams that might need a shooting guard (like the Bulls, Raptors, Heat if Dwyane Wade leaves or Hawks if/when Joe Johnson leaves) or need to unload some contracts but have big man assets (like the Warriors, Hornets or Pacers).

Back to the Nets getting Nuggeted.  After firebombing his second NBA franchise, GM Kiki Vandeweghe brought his draft lottery "luck" with him yet again.  Having Prokhorov participate was awesome, but as soon as I saw Kiki sitting in the back beside Nets President Rod Thorn, I knew the Nets weren't getting a top-two pick.  Maybe the Nets will get lucky, though, and the 76ers will draft the equivalent of Darko Milicic this summer.