Share All sharing options for: Coddled, spoiled and ringless... 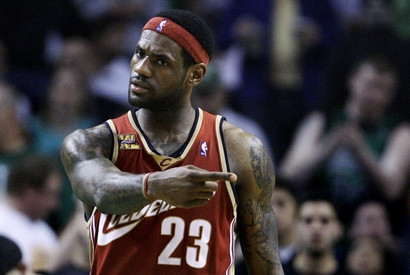 Seven years into their NBA careers, guess what Carmelo Anthony, Chris Bosh and LeBron James all have in common.

I took a wrath of crap when I proclaimed that Carmelo Anthony's 39 points, 11 rebounds game for the Nuggets in Round 1 / Game 4 against Utah wasn't adequate - fair or not - to deliver a victory for Denver.  My thesis was that Melo's scoring and rebounding output in that critical playoff game wasn't nearly enough to overcome his nine turnovers, one assist, matador defense, infrequent trips to the free throw line and foul trouble that ultimately sunk the Nuggets.  In that same article I commended LeBron James for unloading a triple-double on the Bulls in Round 1, referring to LBJ as a "true superstar."

After watching LeBron exited early from the playoffs again, it's fair to say that his 27 points, 19 rebounds and 10 assists game against the Celtics in an elimination Round 2 / Game 6 (lest we forget his god awful, embarrassing Game 5 outing) was not a satisfactory performance for a player with superstar caliber talent.  Along with that triple-double, LeBron turned the ball over - like Melo in that crummy, forgettable Game 4 - nine times to go along with horrible defense and tentative play on offense.  And like Melo in many of Melo's playoff elimination games since entering the NBA, LeBron routinely waited for double teams to find him rather than attack the rim early and ultimately, it cost his Cavaliers the series and may have cost Cleveland a potential basketball dynasty.

While watching LeBron and the Cavs implode in Games 5 and 6, I couldn't help but think of the legendary Kareem Abdul-Jabbar's recent comments about pre-ordained NBA superstars coming into the league as coddled, spoiled teenagers, like LeBron, Melo and Bosh.  And while I hate to disagree with my partner in crime Nate Timmons, I completely agree with everything Abdul-Jabbar had to say.  It's no accident that in the LeBron/Melo/Wade/Bosh Era, the NBA champions have been well-balanced, veteran outfits like the Pistons, Spurs, Heat, Celtics and Lakers.  Only the Heat's Dwyane Wade has a ring among the big four from the 2003 NBA Draft and, not surprisingly, he's the only one who went to college for two years and was 21 years old (Abdul-Jabbar's recommended mandatory age for rookies) when he first stepped on an NBA floor.  And before you point out that Kobe Bryant won three rings soon after entering the NBA as a teenager, please be reminded that it was the veteran Shaquille O'Neal who was named NBA Finals MVP for all those championships.

After completing seven NBA seasons with zero rings and one NBA championship appearance combined between them, I hope LeBron, Melo and Bosh have had ample portions of humble pie.  But I fear that's not the case.  Nothing in LeBron or Melo's body language after their 2010 playoff series defeats have given me any indication that they care about winning above all else, a la Kobe Bryant, Kevin Garnett, Michael Jordan, Tim Duncan and the true superstars who came before them.  Meanwhile, Bosh's Twittering about his future landing place has been childish and not particularly funny, especially if I'm a ticket-paying Raptors fan.

(On a side note, you had to love KG's Celtics besting the Cavs for the second time in three years.  I remember when the two teams engaged in a nasty regular season game towards the end of the season and KG was seen walking off the floor at game's end barking: "We'll see you @#$%& in the playoffs!"  Anyone who backs up trash talking gets major props from me.  And kudos to the Celtics fans in attendance boisterously chanting in unison "NEWW-YOORK-KNIIICKS" when LeBron last got to the free throw line.  That was classic.)

Unlike Bosh's situation in Toronto, however, the Cavaliers organization mortgaged it's future and spent a bloody fortune to surround LeBron with the players necessary to win a championship.  And while you can't say exactly the same thing about the Nuggets, the Denver organization has unquestionably gone to great lengths to surround Melo with a team capable of winning multiple playoff series, if not contend for a championship itself.

But the Cavs, Nuggets and Raptors came up woefully short this season because neither LeBron nor Melo nor Bosh stepped up to the plate and carried their teams when their franchises needed them the most. LeBron couldn't replicate last season's post-season success by a full playoff round, Melo couldn't win a playoff series against a team missing two of its best five players and Bosh couldn't even get the Raptors into the playoffs in a still weak Eastern Conference.  When it mattered the most, their shots were off, their turnovers were high and, perhaps most disappointingly, their demeanors were nonchalant knowing that there's a willing taker who will continue the coddling that began in middle school and another loving fan base around the corner.  (Interestingly, LeBron, Melo and Bosh have been on the basketball world's radar and have been exalted for their "greatness" since they were high school freshmen whereas Wade was a virtual unknown until he earned his way into a roster spot at Marquette and starred there as a sophomore.)

And thus, as always, it's the home fans who will get screwed if LeBron runs away to New York to start anew (have fun playing for a team whose only guaranteed contracts are for Eddy Curry, Danilo Gallinari, Wilson Chandler and Toney Douglas), Bosh bolts south of the Canadian border and Melo leaves Denver in the summer of 2011.

For now, these pseudo superstars are holding their franchises and fan bases hostage.  "Will they stay or will they go?" has been the sole debate in Cleveland and Toronto all season, and will be the never-ending conversation topic dominating Denver sports talk next season.  It's just unfortunate that we're beholden to players who - seven years into their respective NBA careers - don't know how to truly win big basketball games.  A long, anxious summer awaits.

During the Celtics/Cavaliers game last Sunday, I called my 99-year-old grandmother to wish her a happy Mother's Day and get her take on the series.  An NBA aficionado who has seen every great player since the dawn of the league, I asked my grandmother who she was rooting for.  "The Celtics!" she said, almost appalled that I even had to ask.  "That LeBron James is so arrogant and spoiled.  He acts like everyone should just hand him everything.  I'm sorry, but that's not the way it works.  So I'm rooting for the Celtics."

I couldn't have said it better myself.

(As an aside, I strongly recommend reading Yahoo! Sports' Adrian Wojnaworski's excellent column on LeBron James' tenure in Cleveland, written before Game 6.)