For the third game in a row the Nuggets won while scoring just 98 points. We all know by now that when Denver reaches 100+ points Taco Bell gives Coloradans four tacos for just a buck. Well, either the Nuggets are refusing to give their fans a nice deal or Taco Bell is hurting financially by game 79 because a team that averages 106.6 points is struggling to reach the century mark, but at least they are winning.

For the second night in a row we saw the Nuggets get control of a game, then go completely into the tank and then somehow pull out a fourth-quarter win. If the Nuggets plan on playing their last three games the way they did tonight, I'd like to know about it so I can have 911 on speed-dial. My aging heart can't take these types of games the way it used to, but it was nice to see Denver pull out a tough 98-96 win despite Kobe Bryant never stepping on the floor.

Conspiracy theories are best left to Andrew, but tonight's game was a real head scratcher. When TNT's David Aldridge did his in-game interview with Adrian Dantley, Dantley said the Nuggets' plan was to get to the rim. There were a couple issues with Dantley's plan. The first, Dantley didn't use his best lane-penetrater Ty Lawson. The second, the refs basically swallowed their whistle when the Nuggets attacked the basket. Did it cost the Nuggets the game? No. Did it help the Lakers get back into the game and take a lead? Maybe a little bit. But even when the Nuggets got to the foul line they didn't take advantage making only 19-28 attempts. Also, the refs didn't shoot the ball for the Nuggets in the second half and they didn't use more frustrating player rotations ... the rotations were all Dantley.

On the second night of a back-to-back Chauncey Billups, 33 year-old point guard Billups, played 39 total minutes. He played 30 minutes after three-quarters. Ty Lawson, 22 year-old point guard Lawson, played just 3 minutes heading into the fourth quarter and ended the game with 9 total minutes. Lawson, in three previous games against the Lakers, averaged 15.7 minutes, 10.7 points and 3 assists. He changes the pace of the game against the slower, less athletic Laker guards and his chemistry with J.R. Smith is uncanny. So, why wouldn't you get this kid some extended minutes early and see if he still causes the Lakers headaches? Makes no sense and the Nuggets are in trouble come playoff time so long as Dantley is calling the shots.

Kobe Bryant got to call his own shot tonight and that was to not even suit up. Even from the comfort of my own living room I could see the amount of Lakers fans in the stands ... too many for my liking (but I'm stuck in Wyoming) and Bryant didn't give his fans their money worth.

But the fans at Pepsi Center were treated to yet another great Nuggets finish. So many times this season we have seen the second games of back-to-backs be blowouts, but tonight fans got to see a thrilling contest ... even if all the names were not involved (George Karl, Kenyon Martin, Kobe Bryant and Andrew Bynum).

In the first quarter the Nuggets looked like they were going to get rolling and took an early 20-12 lead, the Lakers however battled back and closed the quarter with an 8-2 run and cut the Nuggets lead to 22-20.

The second quarter was all J.R. Swish, the erratic shooting guard scored 16 points in the period and hit four three-pointers (5-11 from deep on the night). Smith's fourth three-pointer broke the Nuggets' franchise record for most three-pointers made in a career. The record had been Michael Adams' since 1991 at 630 made treys. Smith now has made 765 threes in his career and 632 of them with the Nuggets.

The Nuggets used a 19-5 run in the second, thanks to Smith, to take a 10 point lead into the half (57-47). A funny stat brought up by commentator Mike Fratello at the 9:28 mark of the second ... the Lakers surrender the second fewest free throw attempts in the NBA ... of course they do.

Like we witnessed last night against the Thunder the Nuggets went into an unpredictable funk and the Lakers went on a 20-5 run in the third quarter and took the lead on two Pau Gasol free throws (on a phantom Nene foul as said by Reggie Miller) 69-67. Things started looking grim for the Nuggets as the Lakers began to build on a fourth quarter lead after a Sasha Vujacic offensive rebound and eventual three-pointer (87-80 Lakers).

At the 5:43 mark of the fourth quarter, Melo came back into the game and immedietely started scoring ... he poured in 7 points in the blink of an eye and tied the game 92-92. The Nuggets once again would need late free throws to ceal the game. Melo hit a couple to give Denver a 97-94 lead and J.R. Smith went to the line to ice the game for the Nuggets ... Smith's Achilles heel has been free throws, just 71% on the season, and he made just 1 of 2 and gave the Lakers a window to win the game on a three-pointer (which Phil Jackson isn't afraid to let his teams shoot).

Derek Fisher dribbled the ball up court and with Melo on him, he took a contested three and Melo came away with a great contest and blocked Fisher's shot. The Nuggets escaped once again and earned their 52nd win of the season.  There wouldn't be tacos for the fans, but I think Nuggets Nation will surrender them for wins ... 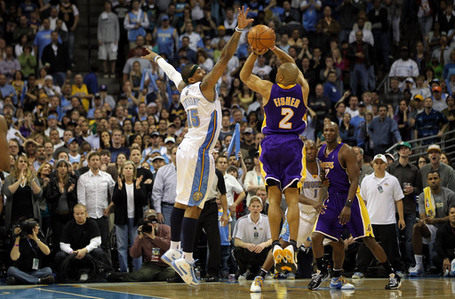 Update: I forgot to mention the late game play of Nene in my recap above. In the closing minutes Nene grabbed a key rebound, hit 1 of 2 free throws to give Denver a 95-94 lead, but even bigger he created two Laker turnovers in the final minutes.

On an entry pass to Paul Gasol out by the three-point line, Nene jumped the passing lane and was able to get a hand on the ball, creating a turnover and key Nuggets possession. With just one minute left, Nene defending Gasol in the post was able to use his quick hands and knock the ball free in the paint and create yet another Lakers turnover.

Without Nene's key defense late in the past two games ... I'm not sure Denver wins.