On the night in which Colorado Rockies pitcher Ubaldo Jimenez threw the first no-hitter in club history, Carmelo Anthony decided to make some history of his own as he set a new personal playoff career-high last night with 42 points in Denver's 126-113 win over the Utah Jazz. The most impressive part ... Melo was only 4-4 from the foul line, but he hit 72% of his shots from the field going 18-25 on the night.

Utah's game plan for Melo looked like they wanted to try to bother him with smaller Wesley Matthews and C.J. Miles and then try to double-him if he drove the ball. The problem, Melo was sinking shots at an unconscious level in Game 1. Melo hit 72% of his shots! 72 P.E.R.C.E.N.T.

The Utah Jazz are really going to miss Andrei Kirilenko's defensive presence in this series, but another defender they really miss is current Fox Sports Utah announcer Matt Harpring. Harpring retired this season after battling injuries the past few seasons and finally just called it quits. The former Jazz forward had a knack for getting under Melo's skin and frustrating the Smiling Assassin. I don't know what is was about Harpring, but he really just knew how to throw Melo off his game. Did he stop Melo? No, but there are ways to get Melo thinking about other things and Matt knew how to do that. Tonight you could see Miles and Matthews trying to body Melo in the post and trying to do what they could, but Melo just stepped back time and again and buried shots from every spot on the floor.

We witnessed Melo's finest offensive showing perhaps of his career tonight, it was at least his finest shooting performance. I don't often talk at length about Melo on this site ... some of it has to do with the fact that we usually know we are going to get a Melo type game from #15 ... a lot of points, some pretty finishes in traffic and some game winners. I like to focus on guys who step up for the evening and Melo just usually steps up every night.

It was great to see the Nuggets come out this evening with a completely different look. When the game got under way you could just feel the emotion pouring out of the television. I would have killed to be at the game and I easily could have been ... shame on me. The Pepsi Center was rocking, Melo's Yellows made a brief appearance as Altitude panned the arena and the place was rocking the white towels.

(I'd love to hear from those of you in attendance what the atmosphere was like ... one text I got from my boy Mark said the place was just "bananas" ... love playoff season!)

The Jazz and Nuggets played each possession early like it was the last few minutes of the fourth quarter as each team was sizing up their opponent. The Jazz got a very big boost from a relatively unknown name among most NBA circles as C.J. Miles abused the Nuggets in the first quarter and put up 13 points on 3-7 shooting, including 5-5 from the foul line. The line on Miles is that he's a deadly shooter if left open, so when Denver closed in on him to contest shots he did the smart thing ... he passed up the long look and drove the lane and got himself to the foul line. Miles finished the first half with 17 BIG points and was keeping the Jazz very much alive.

A good sign for the Nuggets early was that Nene opened the game for the boys in white by slamming down an easy bucket with minor traffic in his way. Nene was huge for the Nuggets in the first half as he scored 13 points and was abusing his defenders. Unfortunately for the Jazz, Mehmet Okur was injured with about 8:04 left in the half after he collapsed to the hardwood after driving the lane and having his already hurting left Achilles just give out on him. It was reported that Okur would undergo an MRI on his leg tomorrow and he didn't look good walking off the floor. The guy was a warrior for just being out there playing on the bad wheel and I hope his injury isn't too serious. If I did somehow make the NBA I would play a lot like Okur ... decent rebounder, goofy look and a willingness to launch three-pointers.

Speaking of three pointers ... Ty Lawson checked into the game late in the first quarter and stayed in for a good portion of the second quarter. Adrian Dantley played Lawson brilliantly tonight and the "not so much a rookie anymore" rewarded his coach with an encouraging effort. Lawson started the game by almost tipping in a last second rebound to end the first quarter and then came out in the second quarter and went 2-2 from deep. Lawson pushed the pace whenever he could, played bothersome and nice defense on Deron Williams and made DWill work on both ends of the floor. I don't mind Lawson getting a few of his shots blocked because at least he's being aggressive and he tends to adjust during games to those blocks by getting himself to the foul line or by setting up his teammates for some pretty passes.

The Nuggets went into the half with a 57-56 lead. The Nuggets  entered the locker room with 12 assists, Melo had 15 points and the Nuggets only surrendered 3 offensive rebounds (zero in the first quarter) while outrebounding the Jazz 23-19.

The Nuggets came out of the locker room and started the second half with a couple of jump shots (one three missed by Billups and one shot made by Melo). I didn't much like the perimeter game I was seeing, but Arron Afflalo changed that. AAA hit a couple threes, including his first one of the playoffs at the 10:26 mark of the third. I was so comfortable with Afflalo's game this season that I sort of forgot he's such a young player and that he doesn't have a lot of playoff experience. Perhaps Afflalo was a bit nervous to open the game, but he got in a little groove in the third. The only problem, Afflalo'd man, Deron Williams, decided to take over for a bit. Williams is a damn good basketball player and did his best one-man wrecking crew in the third quarter. DWill had 6 points in the first half and then exploded for 13 points in the third quarter,  taking advantage of Denver's slow transition defense and getting himself into the paint against Afflalo and even Billups. Russell Westbrook and Andre Miller have shown that guards should attack the Nuggets and they will find success, let's hope Denver's defense makes an adjustment. It wasn't until Lawson re-entered the game that Williams slowed down a bit.

The Jazz tried to take a page out of the Suns playbook by using a zone against the Nuggets for much of the third quarter and I was glad to see the Nuggets beating the zone with some crisp inside passing and some very aggressive drives to the rim. At the end of the third the Nuggets battled back from giving up a couple small leads to the Jazz to take the lead heading into the fourth quarter (88-86).

The Nuggets had a little bit of history on their side entering the fourth quarter and those two things were:

In the game thread just before the fourth quarter kicked off, reader CloudBurst said "(Let's) start (chucking) up some 3's!" (cleaned up a couple grammar issues from fast and furious typing in threads). I immedietely responded with a "No!!!!!" and boy was I wrong. With the score tied 90-90 J.R. Smith walked on to the floor and off with the game!

Swish hit three three-pointers in a row to give the  Nuggets a 99-92 lead and on a heat-check three he hit the front of the rim, but followed his shot and was able to drive the lane and finish with his left hand at the rim to give Denver a 101-93 lead and to give Denver residents some TACOS! Smith's 11 straight points put the Nuggets up for good as Smith, Melo and Company finished off the Jazz to earn the first win of the series.

After looking like a non-factor for much of the game, J.R. came through just when his team needed him to. Melo was needed all night as he found himself in a bit of foul trouble early, but never needed help finding his shot. The winner of Game 1 goes on to win a seven game series 78.6% of the time (309-393) and the Nuggets will need to put this game to rest and focus on Game 2 coming Monday night. 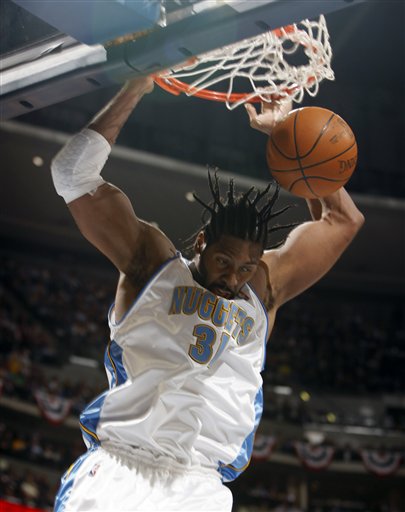