What is Platelet-Rich Plasma Therapy? (Plus Brian Cook)

Share All sharing options for: What is Platelet-Rich Plasma Therapy? (Plus Brian Cook)

As yet another of the Nuggets' family battles medical issues, as Kenyon Martin began receiving platelet-rich plasma therapy (PRP) for his injured left knee Monday March 8th, I needed some additional information on what the heck this therapy even is. Let's get a better understanding ...

In doing a little spot research I was comforted a little bit with the list of athletes who have been treated with PRP therapy. The list includes disgraced golfer Tiger Woods, Los Angeles Dodgers pitcher Takashi Saito, Hines Ward and Troy Polamalu of the Pittsburgh Steelers, more than 20 professional soccer players and even recreational athletes (like you and me) to name a few.

So what exactly is Platelet-Rich Plasma Threapy?

I'm no doctor, although if you have ever seen my YouTube Milk Challenge video you may disagree, so let's get the experts' take.

Torn tendons, muscles and ligaments plague athletes in many types of sports. In attempts to help heal the wounded tissue, some athletes, both amateur and professional, have turned to platelet-rich plasma (PRP) therapy. For the treatment, doctors take a small vial of a patient's blood, about 30 milliliters, and spin it in a centrifuge to separate the platelet-rich plasma from the other components. Then they inject the concentrated platelets at the site of the patient's injury. In theory, the growth factors that platelets secrete (not including human growth hormone) spur tissue recovery. ...

Before playing in all four professional golf majors this year, Tiger Woods received four injections of PRP in his left knee following surgery. ...


Whereas doctors have used PRP therapy since the mid-1990s to aid bone healing after spinal injury and soft tissue recovery following plastic surgery, it has only been in the past year that the treatment has caught on for treatment of sports-related injuries.  "PRP treatment really gained speed last January. It got press that two of the Pittsburgh Steelers [Hines Ward and Troy Polamalu] used it before [winning] the Super Bowl. More and more patients started to ask about it," says Dennis A. Cardone, a doctor of osteopathic medicine at the New York University (N.Y.U.) Hospital for Joint Diseases. Cardone has treated 30 amateur athletes with PRP therapy over the past year.

Experts in sports medicine say that if the technique’s early promise is fulfilled, it could eventually improve the treatment of stubborn injuries like tennis elbow and knee tendinitis for athletes of all types.

The method, which is strikingly straightforward and easy to perform, centers on injecting portions of a patient’s blood directly into the injured area, which catalyzes the body’s instincts to repair muscle, bone and other tissue. Most enticing, many doctors said, is that the technique appears to help regenerate ligament and tendon fibers, which could shorten rehabilitation time and possibly obviate surgery.

What's the recovery time like for players coming back after this treatment?

Dr. Neal ElAttrache, the Los Angeles Dodgers’ team physician, used platelet-rich plasma therapy in July on a partially torn ulnar collateral ligament in the throwing elbow of pitcher Takashi Saito. Surgery would have ended Mr. Saito’s season and shelved him for about 10 to 14 months; he instead returned to pitch in the September pennant race without pain.

Dr. ElAttrache said he could not be certain that the procedure caused the pitcher’s recovery — about 25 percent of such cases heal on their own, he said — but it was another encouraging sign for the nascent technique, which doctors in the field said could help not just injuries to professional athletes but the tendinitis and similar ailments found in the general population.

"For the last several decades, we’ve been working on the mechanical effects of healing — the strongest suture constructs, can we put strong anchors in?" Dr. ElAttrache said. "But we’ve never been able to modulate the biology of healing. This is addressing that issue. It deserves a lot more study before we can say that it works with proper definitiveness. The word I would use is promising."

From the above we can see that Saito started treatment in July of 2008 and returned to action in September of 2008. So there is about a 2-3 month treatment period that worked for Saito. If K-Mart followed this path with his treatment beginning on March 8th and the end of the Nuggets regular season being April 13th in Phoenix, it doesn't give him too much time ... roughly just over a month to get as healthy as he can before the NBA playoffs begin.

Here is Hines Ward's story on his PRP treatment:

The technique played its most glaring role with Mr. (Hines) Ward, a receiver who left that Baltimore (Ravens) game in the first quarter with a sprain of the medial collateral ligament in his right knee. The next day, he was injected with a form of PRP therapy called autologous conditioned plasma, which features different proportions of platelets and other cells. Along with strenuous rehabilitation and hyperbaric oxygen therapy, Ward recovered enough to make two catches in the Super Bowl, in which the Steelers beat the Arizona Cardinals.

"I was next in line, the next guinea pig," Mr. Ward said, referring to Mr. Polamalu’s experience with platelet-rich plasma. "I think it really helped me. The injury that I had was a severe injury, maybe a four- or six-week injury. In order for me to go out there and play in two weeks, I don’t think anyone with a grade-2 M.C.L. sprain gets back that fast."

Will this PRP treatment work?

... several doctors emphasized that platelet-rich plasma therapy as it stands now appeared ineffective in about 20 to 40 percent of cases, depending on the injury.

With such limited research thus far with PRP treatment it isn't known if the treatment will work or not. If Martin's injury is truly just tendinitis then I think his chances of treatment working are much greater. If there is a ligament tear (even a minor one) I think this new wonder treatment will be far less effective. It sounds to me like K-Mart sees the writing on the wall and that surgery will derail the Nuggets' season and he's willing to perhaps sacrifice long-term health for a short-term championship run.

In lieu of Kenyon Martin, it appears the Nuggets are ready to add shooting big man Brian Cook to their roster. As reported by Travis Heath of Hoops World, the Nuggets were impressed with Cook's shooting after his workout in Denver yesterday (March 8th) and are expected to sign him to a contract. Cook, pictured on the left next to Tracy McGrady, has been doing a lot of sitting these past few seasons.

The former Laker, Magic and most recently Rocket has only appeared in 81 games the past two seasons and saw very limited action in 15 games with the Rockets this season. Cook, at age 29, peaked from 2004-2007 when he was with the Los Angeles Lakers as he averaged 7 points and 3.2 rebounds. He shot 40.3% from three-point land during that three year stretch including 76.6% from the charity stripe.

Coming out of Illinois I expected Cook to have a little bit better of a career and maybe with the Nuggets he can come in and offer some outside shooting and stretch the floor if and when he sees some action. It's obvious the Denver could use an extended rotation and hopefully Cook's presence will be a positive ... I'm not sure of Andrew's take on Cook, but I'm sure he'll offer up some thoughts in the coming days. 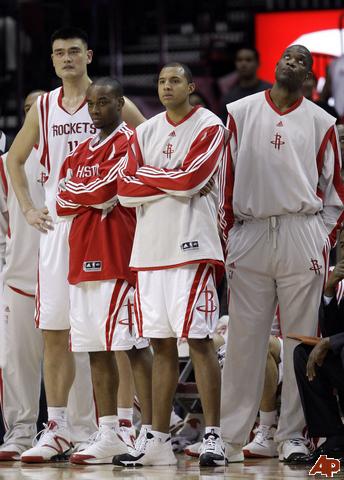 via nimg.sulekha.com
You can see that Cook has decent size and he towers over
Carl Landry and is comparable to Dikembe Mutombo and Yao Ming. 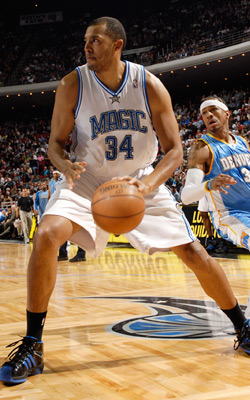 via grfx.cstv.com
Hey, Cook's got the ball inside the three-point line!