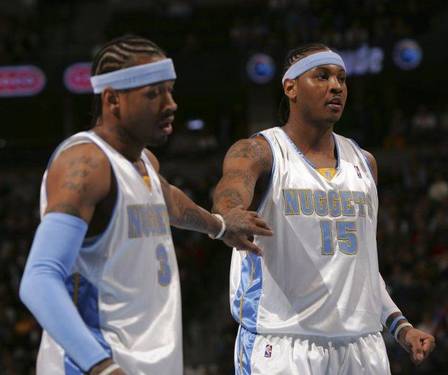 Here's a smattering of recent Nuggets coverage, notably Stephen A. Smith's column on Allen Iverson claiming that the former Nugget will either "drink himself into oblivion or gamble his life away."

Stephen A. Smith: Iverson needs more than a prayer | Philadelphia Inquirer
His closest confidant asked the basketball world to pray for Allen Iverson, as if no one has all these years while seeing this train wreck coming.

Nuggets' Renaldo Balkman Hoping to Turn Around Tough Season -- NBA FanHouse
At least, Denver Nuggets forward Renaldo Balkman got into a game Wednesday. Balkman, who has endured a trying season, finally stepped on the floor.

Nuggets' Andersen blocks out the hurting - The Denver Post
Chris Dempsey covers the Birdman's assortment of injuries and how he's rebounding from them.

NUGGETS: The Nuggets Beat with Aaron Lopez
Lopez talks to Anthony Carter about his new role this season as third-string back up point guard and conveys how classy A.C. has been given the circumstances.