And the award goes to... (Nuggets/Blazers recap)

Share All sharing options for: And the award goes to... (Nuggets/Blazers recap)

The only award befitting the Trail Blazers after their uninspired performance tonight is a "Razzie."

I take back everything positive that I said about the Trail Blazers in my game preview.  While what I'm about to say may not endear me to Blazers fans, having seen this team up close and in person I'm shocked that they're still in the Western Conference playoff hunt.  Simply put, the Blazers stink.

At lunch with Fanhouse's Chris Tomasson today, he said that the Blazers are the one team that the top Western Conference seeds are scared to face in the first round.  After witnessing such a listless performance from a supposed talented team that had since Wednesday to prepare for a banged up Nuggets team playing its seventh game in 11 days, I can wholeheartedly say: bring on the Blazers - it would be a pleasure to face these guys in the first round, with or without Kenyon Martin.

When Blazers star Brandon Roy decides to take a night off, as he did tonight, the Blazers seem to be devoid of other options offensively.  Yes, Roy's backup Jerryd Bayless had a nice game, but much of his offense came off jump shots while the Blazers were getting smoked off the Pepsi Center floor anyway.  With Roy uncharacteristically out of it from the opening tip onward, the Blazers were stagnant on both ends while the Nuggets raced around them to 118 points, keeping their undefeated home streak alive when the Nuggets score north of 110.

It's pretty amazing to think that the Nuggets only home defeat to a Northwest Division "rival" this season was at the hands of the lowly Minnesota Timberwolves back in November.  Because the Jazz, Thunder and now Blazers have been nothing short of no-shows in Denver thus far.

The View from the Not-So-Cheap Seats...

...on J.R. Smith's second three-point make, the ball bricked off the rim about three feet above the basket and then dropped in.  As J.R. strutted back down on defense, Blazers point guard (and former Nugget) Andre Miller could only shake his head.

...speaking of Miller, who knew he could dunk so ferociously?!

...Broncos (for now) wide receiver Brandon Marshall sat right in front of us at courtside and was wearing a light blue hat.  When the national anthem began, the guy standing next to Marshall had to remind him to take his hat off.

...Denver native and Tennessee Titans running back Lendale White sat a few seats down from Marshall and when his first cousin Chauncey Billups saw him sitting there, he said "What's up, White?!" in the middle of the game.

...at half time, about half the Nuggets players went up shake Marshall's hand as if he was the godfather of courtside.

...also at half time, Billups could be seen showing Arron Afflalo an assortment of head fake and step moves, with Afflalo paying close attention.

...Carmelo Anthony seems to be back to full health and more importantly, these past few games he has let the game come to him and has been playing exceptionally well.  It's no accident that the crowd routinely chanted "M-V-P" each time Melo stepped to the free throw line tonight.  When Melo is playing loose and smiling while crushing the opposition...look out.

...at the 9:04 mark in the fourth quarter, I think Nuggets head coach George Karl officially assembled his most curious lineup ever - four guards: Chauncey Billups, Anthony Carter, J.R. Smith and Arron Afflalo, and one Stiff center: Johan Petro.  Funny enough, the Blazers were also playing with four guards and one big man in LaMarcus Aldridge.

Non-Stiff of the Game

-J.R. Smith: One game removed from dishing out a season-high eight assists, the suddenly pass happy Smith dished out seven to go with 8-14 shooting from the field and two steals.  Making things even better, J.R. is looking patient out there.

Stiff of the Game

-Brandon Roy: Beyond the fact that Roy missed 11 of his 14 shot attempts, his body language stunk from the opening tip.  In uncharacteristic fashion for a player of Roy's caliber, the Blazers star player didn't appear to want to be on the Pepsi Center floor tonight and instead just went through the motions without ever attempting to impose his will on the game.  If I were a Blazers fan, I couldn't be more disappointed in Roy's performance tonight. 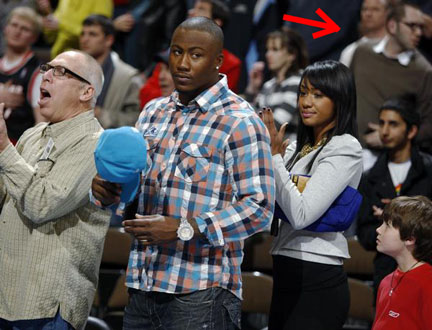