They say a picture is worth 1,000 words. Well, back on September 28th, 2009 Mike Miller's expressionless accompanying photo, from the Wizards media day, foreshadowed his team's season. There hasn't been much to cheer for in the Nation's capital in regards to their NBA team, but hey - they do possess a lot of upcoming salary cap room.

Big Z talks for first time since trade to Wizards ...

Ilgauskas spoke to the Cleveland Plain Dealer for the first time since his trade on Wednesday, and while he admits being angry, he isn't so angry he won't return - if Washington lets him.

Right now I'm a Wizard,'' he said. "I think eventually they'll let me go, but that's just my guess. They haven't told me anything yet. First I've got to go to Washington, and hopefully after a couple of days they'll let me go home."

About the only thing that has changed from Miller's picture above? He no longer is sporting the burnt out surfer look that would make him a perfect guest-star on John From Cincinnati ... you know, if that show hadn't gotten canceled after going nowhere. Take a look ... 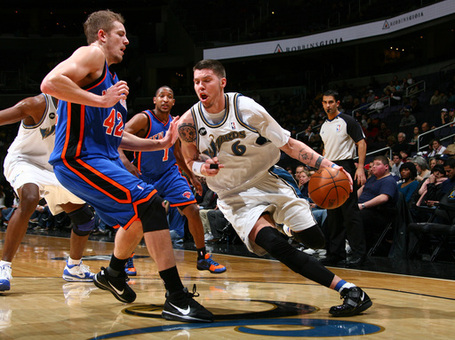 Perhaps Miller's boyish new look was also a sign of things to come for his team as the Wizards are now in position for a youth movement themselves. Gone are veterans Caron Butler, Brendan Haywood and Antawn Jamison and in their place is a young scorer who fell out of favor with the L.A. Clippers in 26 year old Al Thornton, a 29 year-old all-around talent who was cast off from Dallas and is trying to rediscover his game in Josh Howard and a couple of draft picks (Cleveland's first-rounder and and Sacramento's second-rounder).

Check out his feature story on Josh Howard's off-court issues

Did the Wizards do the best thing in blowing up their team? I would have to say yes. As previously constructed the Wizards were one of the highest-salaried teams in the league, but were not NBA title contenders. The Wizards now have a chance to rebuild, but the problem? Current General Manager Ernie Grunfeld is the one responsible for most of the Wizards moves that led them to having to rebuild in the first place. If the team truly wants change they should look for some new front office help this off-season.

With their new-look squad the Wizards defeated the Minnesota Timberwolves 108-99 on Tuesday, Feb. 16th. The Wizards were without their three most prominently traded namess (Butler, Haywood and Jamison) and the team stepped up to beat the Wolves.

Minutes have now opened up for power forward Andray Blatche (33 points vs. the Wolves), center JaVale McGee, shooting guard Nick Young and Howard. The Nuggets will also get their first look at former Nugget Earl Boykins who is averaging 7.5 points in roughly 18 minutes per night for Washington.

It's sort of odd that the Nuggets haven't faced the Wizards after 54 games, but Denver needs another road win and a team trying to gel like the Wizards could provide an easy one. Over the Nuggets final 28 games ... 20 of them will come against teams that are battling for playoff position and to get into the post-season (21 of 29 if you count last night's thriller). The Nuggets haven't dominated sub .500 teams this year (like they did last season) and have played quite well over the top dogs in the league, but this final stretch is going to be brutal.

While Denver stood pat at the trade deadline yesterday (Feb. 18th), things have been anything but standstill for the Nuggets. The team has been battling minor injuries to its star players all season and the man on the bench, George Karl, is now in the limelight with his own battle.

We saw the Nuggets fight incredible hard last night as they beat the hottest team in the NBA as the Cavs were winners of 13 straight and 15 of 18 ... two of those three losses came at the hands of our Nuggets. The Nuggets played a hell of a first half, let the Cavs assume control for a bit in the second half and ultimately clawed their way back into the game and took care of business in overtime thanks to Melo's jump-shot facial on King James.

One thing I did notice about the game last night ... J.J. Hickson is an energizer. His athletic ability reminds me of a young Chris Andersen or Kenyon Martin. He's able to make his impression on the game by playing above the rim. It's no wonder the Nuggets were looking to add a young athletic guy like Tyrus Thomas or Hakim Warrick at the deadline ... those two guys might not give Denver the best defensive match up against the Lakers, but they both would have given the Nuggets a boost on the offensive end with their ability to explode to the rim and probably would have made some highlight worthy blocks. Hickson just played with a different energy level last night and it had an effect on the game.

Melo, K-Mart and Billups all went 43+ minutes last night so it'll be imperative for Denver's bench to play well against the Wizards this evening. The Nuggets didn't get out of Cleveland as early as played with the overtime period and the early start tonight (5 p.m. MST) wont do Denver's legs any favors, but if the Nuggets play the right way tonight they should earn a win.

And by the right way I mean the Nuggets need to share the ball (typically an issue against lesser team on the road for the Nuggets), protect the defensive glass (always tougher when you're tired) and get to the rim (slowing the game down with foul shots and high percentage shots will be key). We've seen too many road games where the Nuggets get into jump-shot mode and play lazy defense and after a big win against the Cavaliers, it would be a shame to drop what should be a gimmie game tonight.