Share All sharing options for: Recapping "Stiffs Night Out"... 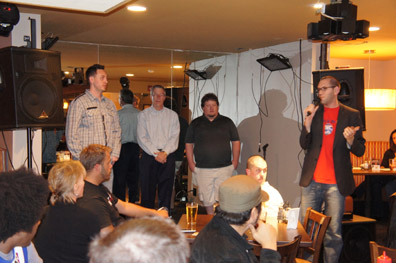 We upped the ante big time for our second annual "Stiffs Night Out".  The only question now is: when are we doing the next one?

Nate, Jeff and I want to sincerely thank everyone for making our second annual "Stiffs Night Out" more memorable than the first one!  Not only did we have a handsome collection of fellow Stiffs in attendance, but we were joined by Denver radio legend Sandy Clough, AOL FanHouse's Chris Tomasson (formerly of the Rocky Mountain News) and the Denver Post's Benjamin Hochman.

The festivities kicked off around 7:00pm, just in time for the Nuggets at Mavericks game to tipoff.  Before tipoff, we laid down the rules for Denver Stiffs Trivia, which was played between quarters, at halftime and after the game.  Each round had a theme followed by three questions and each question was accompanied by a tie-breaker question.  Trivia was MC'd by our celebrity guests, with Sandy doing the honors for the first few rounds.  For those who missed the event, I've pasted the trivia questions below.

The event took place at the new Jake's restaurant which offered wings and beer specials, and everyone in attendance had a good view of the TVs.  The svelte Sandy Clough attempted to take down the 16oz Jake Burger but didn't succeed.  And the game, as you know, was a thrilling, down-to-wire Nuggets victory against the much bigger and healthier Mavericks!

A number of attendees suggested we do a "Stiffs Night Out" monthly for big road games.  Right now we're leaning towards every two months - i.e. doing a few more after the New Year and into the playoffs.  We welcome feedback from those who attended and those who wish they could, and look forward to another "Stiffs Night Out" soon!

Nate, Sandy, Jeff and Andrew kick off the evening's festivities. 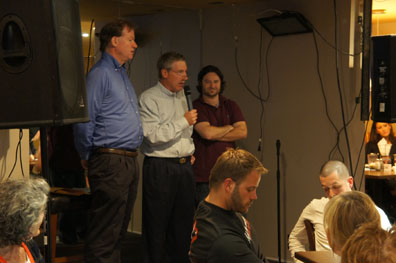 The three wise men: Tomasson, Clough and Hochman on stage. 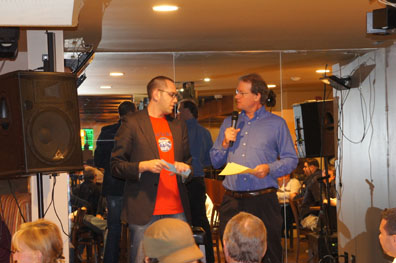 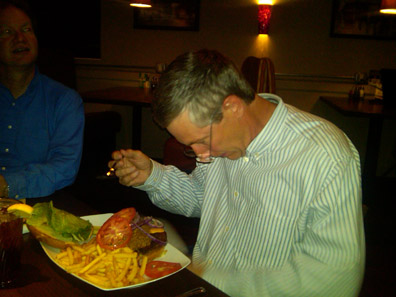 Sandy attempts to take down the 16oz Jake Burger. 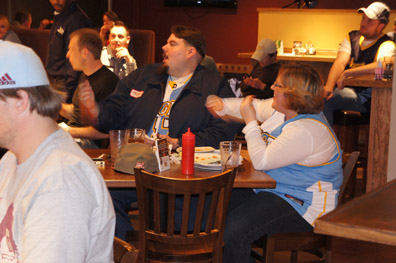 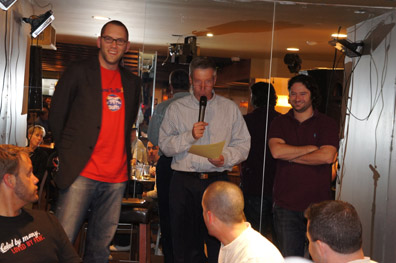 Clough and Hochman MC the festivities. 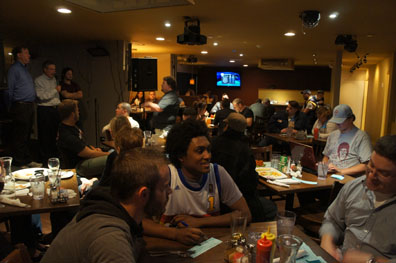 And here are the trivia questions that were asked.  I promise they'll be a tad easier next time!

2) Who is the only player in professional basketball history to win the MVP, All-Star Game MVP and Rookie of the Year in the same season?  Hint - he played in Denver.

3) Who is the only Nugget to have won the NBA’s Most Improved Player Award?

1) Who is the Nuggets THIRD all-time leading scorer, combining ABA and NBA figures?

2) Who is the Nuggets all-time leader in three-point field goal percentage?

3) Who is the Nuggets all-time leader in turnovers?

1) Name all six NBA teams that Chauncey Billups has played for.  (In order)

2) What year did the Nuggets become the "Nuggets"?  (And who named them?)

3) Where does Fat Lever rank on the all-time triple-double list? (How many total?)

1) In 2008, Allen Iverson was traded for three Detroit Pistons.  Name all three.

2) Tie-breaker question: How many total points did Denver Stiffs Hall of Famer Nikoloz Tskitishvili score in his Nuggets career?  (Closest without going over wins)