Watching a victory from five feet away... (Nuggets/Jazz recap)

Share All sharing options for: Watching a victory from five feet away... (Nuggets/Jazz recap)

The last time we saw the Utah Jazz face off against our Denver Nuggets a short-handed Jazz squad ran circles around us and walked away with a playoff series victory.  What a difference a little coaching makes.

Of all the things I discussed with Nuggets head coach George Karl on the eve of the team's opening night game, the one that jumped out at me most was when Karl referenced the Nuggets 144-106 beat-down of the Phoenix Suns - sans any of the Nuggets key players, mind you.  Karl said that that performance would be an indicator of things to come this season and boy was he right after witnessing Wednesday's 110-88 walloping of the Jazz.

I was fortunate enough to watch the home opener from a courtside seat thanks to an invitation from my friend Kevin Preblud, the publisher of InDenverTimes.com and a great photographer as you'll see below.  Not only was it special to sit so close for the first time in my life, but it was even more special to high-five Coach Karl and pat him on the back as he made his way onto the court for pre-game introductions.  Karl gave me a wink and a smile - he was confidently ready for this one.

The game turned out to be a snoozer, but the night was unforgettable.

The View from the Not-Even-Close-to-Being-Cheap Seats (with photos courtesy of Kevin Preblud)... 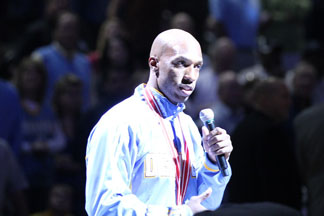 ...before lineups were announced, Chauncey Billups was honored for helping to bring home the gold medal in the 2010 FIBA World Championships. 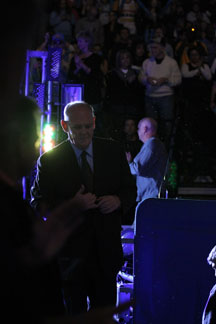 ...not surprisingly, the biggest cheers from the crowd came when Carmelo Anthony and George Karl's names were announced.  Denver basketball fans - at least those in the Pepsi Center audience - clearly want Melo to stay for good. 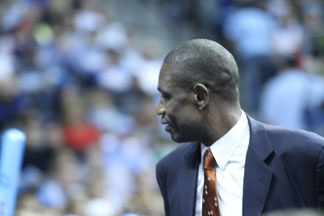 ...former Nugget and NBA great Dikembe Mutombo presented the game ball before tip-off.  The mere sight of Mutombo brought a raucous cheer from the crowd. 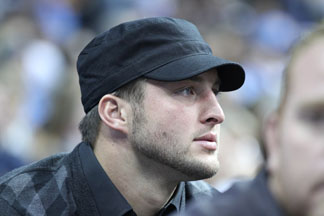 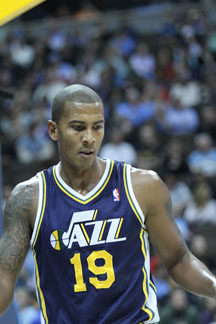 ...the new Jazz uniforms, like the new Golden State Warriors jerseys, are awesome - a great blend of the 1980s style with a modern twist.  The Nuggets should consider doing something similar and incorporate the rainbow/skyline pattern from yesteryear. 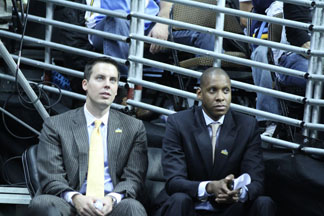 ...Nuggets owner Josh Kroenke and GM Masai Ujiri watched the entire first half from seats set up by the home locker room entry way.  For the second half, I didn't see Kroenke but Mutombo joined Ujiri.  While seated, Kroenke and Ujiri engaged with the fans sitting around them and that was good to see.

...the Nuggets new assistant coach, Melvin Hunt, has been relegated to the "second row" of assistant coaches behind the staff brought back from last season.  I understand that where assistants sit is somewhat political, but I saw Hunt do a masterful job with the Cleveland Cavaliers last season and wish he was Karl's number two on the bench.

...Ty Lawson came in early for Billups who sustained a nasty cut on his lower lip.  Billups was bleeding so much that he had to be tended to in the locker room, but he looked fine as soon as he returned. 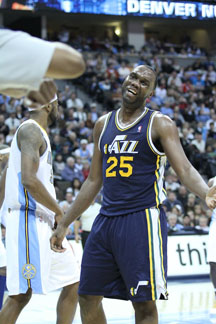 ...Al Jefferson is no Carlos Boozer and I may have been foolishly too bullish on the Jazz this year.

...Jazz rookie Gordon Hayward has surprisingly long arms and big hands.  Hayward looks to have a good NBA body but he couldn't shoot straight in his debut game. 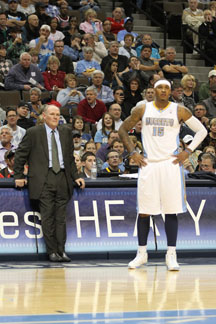 ...Melo had a very pedestrian first quarter-and-a-half, letting the refs and the Jazz's physical style of play get to him.  But when he finally got into the groove late in the first half, the trademark smile was back, he let the game come to him and ended up having a productive evening. 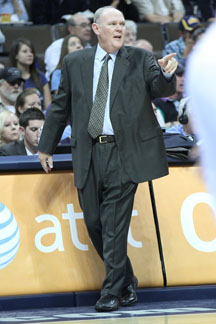 ...Karl worked the refs in defense of Melo earlier than I've seen in years.  Karl was also up on his feet and barking orders at the players a lot.  It was as if he had been storing all this energy for months and was just waiting to unleash it on opening night. 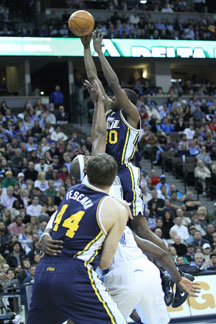 ...Jazz rookie Jeremy Evans is a skinny kid but has tremendous leaping ability and I believe big upside.  He had a nose for the ball and seemed to fit into Jazz coach Jerry Sloan's system early, in addition to crashing the boards well.

...Pepsi Center's in-game scoreboard entertainment remains atrocious.  They showed a poor resemblance toFunniest Home Videos when instead they should be showing NBA bloopers (in addition to highlights, "this night in Nuggets history" and the endless other ideas I've given them for free over the years).  I'm convinced whomever picks the in-game entertainment has no idea what he or she is doing. 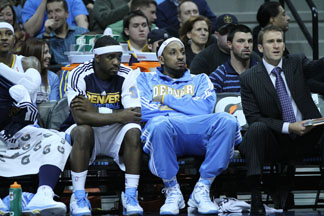 ...seeing Renaldo Balkman sulking on the bench early and often, I turned to Kevin and said: "Karl will never play Renaldo."  Then Balkman got into the game, but Karl started yelling at him right away for not being in the right place on the court.  It was pretty comical.

...Jazz backup center - and former Nugget - Francisco Elson fell victim to the NBA's new "no tolerance" policy.  He got tee'd up for saying "Come on now!" to one of the officials after a play in which he thought he had been fouled. 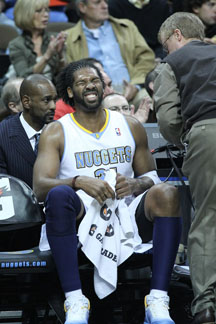 ...I couldn't tell what happened to Nene in the first half that caused him to miss some action and be attended to by trainer Jim Gillen, who was honored for kicking off his 20th season with the organization.

...Arron Afflalo's to-the-basket game has improved dramatically.  And I mean dramatically.  Last season, Afflalo would routinely miss chip shots around the rim on breakaways or cuts to the rack.  Not tonight.  Afflalo looks like a new player and this bodes well for Denver. 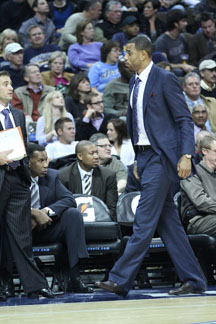 ...maybe it was his very stylish suit, but Kenyon Martin looked super thin to me tonight.  Not necessarily a bad thing, but he looks more like a small forward than a power forward from a few feet away.

...cognizant of the new "no tolerance" policy, a number of players consciously caught themselves before ranting too much to the refs.  Maybe this could be a good thing for the NBA after all? 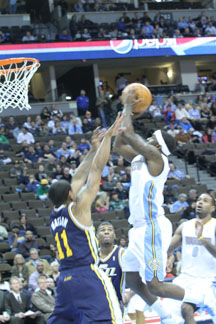 ...Lawson's spacing when taking the ball to the basket has improved greatly.  We should all be excited about the season he's going to have. 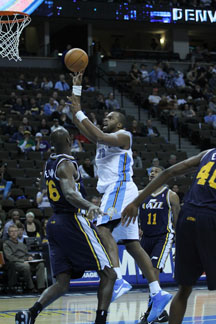 ...I think six of Shelden Williams' seven offensive rebounds came on the same play in the first half as he was tipping the ball up-and-down to himself trying to get a hold of it...and never did.  Kudos to Williams, however, for playing hard all night and being very productive on the glass and on defense. 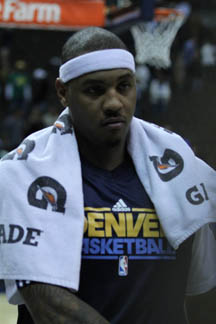 ...Melo was all business coming in and off the court.  Never smiling and looking as serious as possible.

-George Karl: After battling cancer for the second time in his life, a thinned-out Karl had his team much better prepared than his opposing coach's team.  Moreover, Karl was energetic throughout the game, supported his players against the refs and never sat still.  Could "Fiery George" be back?

-Al Jefferson: My third round fantasy "steal" laid an egg in his Jazz debut, mustering just six points on 2-6 shooting, a mere seven rebounds and had a plus/minus of -17.

As predicted by Karl - and I have to give Nate and Jeff credit here, too, for being more optimistic about the 2010-11 Nuggets than I've been - the Nuggets look damn good.  They clearly had a solid training camp and are ready to prove the NBA wrong again, just as they did in 2008-09.  It all hinges on Melo staying, though, an unfortunate circumstance that will be in play all season long.

But for now, we'll savor Karl's return to the bench and an ass-kicking over the Jazz.