What type of fan are you?

Share All sharing options for: What type of fan are you?

What type of fan are you … Can you calmly watch a game? Do you love to yell and take years off your life with each possession? Do you have to watch from home? Are you a barfly when it’s game time? How often can you be found at Pepsi Center? Me? I like to mix it up.

Denver fans take a decent amount of flack for being "fair weather fans" and "bandwagon jumpers" when it comes to any team not named the Broncos. But is this true? I think if you are a native Coloradan or a transplant that now calls Colorado home then you know the answer to this and the answer is: there is A LOT to do in Colorado!

When the local team is down on their luck and attendance numbers suffer it’s not because people don’t like the team anymore … it’s just that we want to pay for a product that will entertain us at that point in time. Whether it is going to the game, heading up to the mountains to ski, hiking a 14er, mountain biking, riding the alpine slide, hitting Waterworld or Elitches, catching a concert at Red Rocks Amphitheatre, tubing a lazy river, getting ambitious and going white water rafting, going to the sand dunes, or partaking in a round of 18 for a golf pub crawl Colorado has a lot to offer. (Can I get a check for plugging tourism?)

It’s sort of asking a lot to get this active state to slow down and watch a game … especially if the team isn’t competing at the level we feel entitled to. But this doesn’t mean that fans around the state have stopped checking in on their team. And we saw it all come together recently with two awesome runs … with the Colorado Rockies historical "Rocktober" ride to the World Series and with the Denver Nuggets hard fought and well deserved shot at playing for the Western Conference Championship.

For me … I still consider Game 163 Rockies vs. Padres one of the greatest live sporting events I’ve ever attended. But watching this Nuggets team finally find success in the playoffs was surreal. I didn’t want Denver’s season to end last year … not so much because I wanted them to win the championship, but because I knew this team was special and that they probably wouldn’t be the same ever again.

I found myself attached to the 2008-09 Nuggets like never before. Yes, writing this blog definitely helped keep to glued to the team, but even before I began writing for SB Nation I was hooked in a way that I hadn’t been in years. I genuinely cared about the team and the enjoyment that I sensed them having on the floor playing along side one another made their success even more special. And to top it all off … the city was getting sick and the only remedy was more Nuggets basketball. Everywhere you looked there was Nuggets gear and all anybody could talk about was … "how far will they go?"

The biggest question that I was faced with each time a game was on and being played in Denver was … where am I going to watch this thing?

I’m not too big into hitting a sports bar for the games, but I did it last season to get some different flavor … Timosabi loves his flavor. I watched a few games in downtown Denver at Jackson’s Bar and Grill, Maloney’s Tavern, Brooklyn’s, Braun’s, and Lodo’s. The atmosphere was a mixed bag depending on the importance of the game … for instance I caught a game at Jackson’s during the World Baseball Classic and I had to settle for a lone TV and no sound as a group of dudes watched and cheered for some reason or another for meaningless baseball.

I’ve never had much success at the bars with environment … I think about the best time I can remember was watching the Lennox Lewis vs. Vitali Klitschko boxing match in 2003 at ESPN Zone in downtown Denver … when Vitali wobbled Lewis the place erupted and strangers were high-fiving strangers aka the litmus test for knowing things are going well at the bar.

So, I tend to shy away from invites to hit the local watering holes when my team is on. 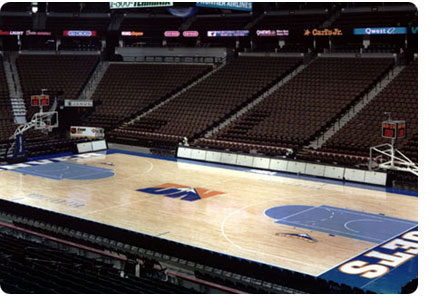 Being at the games … there really is no better experience than hitting a playoff game at the Pepsi Center. The electric crowds had me checking my ears throughout the game to make sure by head wasn’t leaking blood from a blown out eardrum. Again, Pepsi passes the litmus test of being able to high-five strangers whenever something good happens.

I don’t think there is a bad seat in the house. During the Hornets series we scored some pretty nice seats behind the hoop on the Hornets end for a game and I watched multiple games up in the "nose bleeds" with Melo’s Yellows. The best part about hitting the games, at least from my experience during the playoffs, was the pre-gaming at Braun’s and Brooklyn’s. There were Birdzilla mo-hawks everywhere you looked and the chants of "Let’s go Nuggets" broke out on a regular basis. And it’s always fun to be able to boo the opposition’s fans on your way into the stadium (in a good-natured manner of course.) I’m pretty sure I left every game without a voice as I was either cheering or trying to explain to the refs (who could totally hear me at all times) why they just made a horrible call … by yelling as loud as possible.

The only real thing that’s missing from watching the games live at Pepsi is not having all the handy-dandy stats from Scott Hastings and Chris Marlowe, as well as injury updates or explanation of calls, or instant replay on all plays … I guess that’s more than "the only thing that’s missing," but you get my point.

So, yes I love attending the games and that’s really the whole point right? But it can drain your wallet ...

I absolutely love watching the games from home. Not only can I totally cut loose with my vocabulary, but screaming, pulling my hair out, and throwing stuff is totally acceptable and even expected. I will venture over to a few select houses to watch the games and it’s as good as watching from home, but my home-base is pretty sweet. My roommate decided to add a 50’’ HDTV into the mix last season and it made going anywhere else to watch games difficult. I was ticked that not all the games on Altitude were shown in HD, but that is changing next season. As read on CBS 4 Denver, "More than 70 non-exclusive games will be aired on Altitude or Altitude 2, while all televised games on Altitude this season will be available in HD." (Update: thanks to reader BrianD ... we learn that all Nuggets and AVS games will be in HD this season! Click here for more.)

There really is nothing better than having a few buddies over for the game, barbequing, and kicking back a few beverages. Sports are a great excuse for social events and you really can’t go wrong with whatever option you choose.

Now, what type of fan are you?