Rarely magical for Denver in Orlando

Share All sharing options for: Rarely magical for Denver in Orlando

Perhaps we should have seen Denver's trip to the Western Conference Finals coming. Ending that 24-year drought was the last demon the Nuggets exorcised last year, but it wasn't the first. Earlier in the season the Nuggets earned their first victory in Orlando since the 1991-92 season ... putting to end a miserable 0-15 stretch. Why is it so hard to win in Orlando? Will Denver's new blood make any difference? Let's take a look ...

When it comes to being a sports fan, we question everything about our teams. Each time the Nuggets were slated to play the Magic in Orlando ... I chalked it up as a loss. Why did I do this?

Are the Magic just one of the best teams in the NBA year-after-year? Not really.

Was there some type of mojo going on in Mickey's backyard? In a way ... yes.

I basically let history be my guiding light and said to myself, "Well, we just can't ever win in Orlando ..." as if they made the Nuggets' rim slightly smaller each half. But what is with the history aspect? Just because the Nuggets lose there, does that mean they always will? Can history keep repeating itself year-after-freaking-year? I was starting to think so until last season's 82-73 win happened (the Ugly Duckling Game).

Let's get the obvious stuff out of the way. Orlando is roughly 1,855 miles away from Denver, according to Maps of the World.com. So, any trip from Denver to Florida is going to be a fairly long one ... or to Florida from practically any NBA city. But the schedule makers don't really do the Nuggets any favors when they travel to the Magic Kingdom.

To make matters worse ... out of those 19 games in Orlando, the NBA schedule makers have made 10 of them, including the last five in a row, the second game of a back-to-back set. And the Nuggets are just 1-9 in those contests ... the one win coming this past season.

What about the other nine games? Well, seven of them came with one days rest in-between, but still saw Denver traveling from locations like Utah, Minnesota, and Boston ... Denver went 2-5. And when Denver did get rest ... one game came after the all-star break in 1996 (five days off) and the other with three days rest ... Denver went 0-2.

Things have gone so poorly for the Nuggets in Orlando that Denver has their 2nd worst overall win percentage against the Magic.

The one thing you may notice about the above teams is the rich tradition of all the squads except for the Magic. Not that Orlando has been a poor franchise by any means, but consider the Lakers. The Lake Show just finished their 61st season of professional basketball (between Minneapolis and L.A.) and have only turned in a sub .500 record 12 times (seven since moving to L.A. in 1960.) That's an astounding 49 seasons of .500 ball or better! No wonder why their fans can be so arrogant.

As evidenced by the overall record versus Orlando, (14-27 ... 3-16 in Orlando) it's not the Magic that dominate the Nuggets, as Denver is 11-11 at home against them, but rather the travel and schedule. It's quite the home advantage being tucked down in the corner of the United States ... one that Orlando finally took advantage of last season tying for the 6th best home record in the NBA by going 32-9 (one game worst than the Nuggets' 33-8 mark at home.)

What does Ty Lawson, Arron Afflalo, Malik Allen, and perhaps 2-3 other Nuggets players have in common? They have never lost in Orlando as a member of the Denver Nuggets. They will have the opportunity to start fresh, unlike Carmelo Anthony who is 1-5 versus vs. Amway Arena. 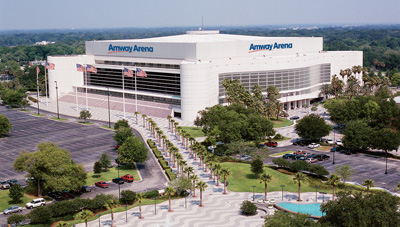 via propelhq.files.wordpress.com
Amway Arena will soon be gone ... good riddance.

Amway Arena ... perhaps the building is haunted. Maybe that is why our Nuggets don't find success in the "beautiful" place. (Side note: It's hard for me to like any other arenas because Pepsi Center is truly beautiful.) The best news to come out of Orlando in a long time for Nuggets fans is unfortunately not that Dwight Howard will be coming to Denver, but rather Amway is heading into its final season as the home for the Orlando Magic. As was announced in 2008 ... the new arena should be ready for the 2010-11 season. If Amway purchases the naming rights again I may throw myself into an open elevator shaft ... OH WAIT ... IT'LL BE CALLED THE AMWAY CENTER?! GREAT, GRAND, WONDERFUL!! I guess I'll start my walk to our elevator bay ...

I guess it could be worse ... we could be facing Orlando on a back-to-back this season! But for the first time in six seasons we'll just have to settle on improving our 2-5 record with one day of rest in-between games as the Nuggets travel to Orlando from Toronto for the game on March 28th.

Yes, this is the type of stuff I think about during the offseason ...

*The Nuggets did not travel to Orlando during the strike shortened 1998-99 season.