We got a taste of what Billups could do last season, but what can we expect going forward from Colorado's homegrown talent?

A quick heads up: before the draft and the offseason chaos began I was going through "exit interviews" for each current member of the Nuggets roster. Which now brings us to Chauncey Billups. For a look at previous exit interviews ... just click on the following names: Carmelo Anthony, Linas Kleiza, Renaldo Balkman, Chris Andersen, Nene, and Anthony Carter. 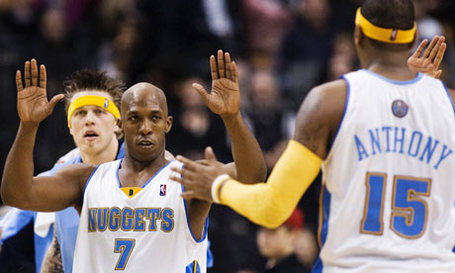 Overview of 2008-09 season: I never understood the National Media bashing the Billups for Iverson swap from Denver's perspective. I couldn't have been more excited when the Nuggets acquired a true point guard and a proven winner. It wasn't until Billups had been with the team for awhile that I realized he could easily carry the label: Player/Assistant Coach.

Every time Billups pulled one of his teammates aside for a little one-on-one chat in dead-ball situations I found myself admiring his leadership and dedication to the team. From the moment Chauncey got to Denver we heard how he just wanted to win, but it wasn't until ESPN's Tom Friend published his article The Disposable Superstar that I realized Billups also cared about giving back to the game that gave so much to him.

In Friend's piece we learned that Sam Mitchell was an important veteran influence on Billups in Minnesota. Mitchell once told both Billups and Kevin Garnett to "pull your britches up" in response to KG no longer wanting to be called "The Kid".  And during the season each time J.R. Smith took the ball to the rim and finished in traffic or dished it off to a teammate for an easy basket I found myself saying, "He's pulling his britches up!"

I've talked a lot about Billups being a great influence on the Nuggets since his arrival and a great guy to tutor a young point guard (Ty Lawson) that he could eventually pass the torch to, but that time is not here yet. Not with Billups still putting up all-star numbers and leading the Nuggets to the brink of the NBA Finals last season.

Positives / What he brings: Leadership, professionalism, game manager, and clutch performer. Billups has developed himself into one of the premier point guards in the NBA over his career. He got there the old fashioned way ... hard work and dedication. He knows when to get his teammates involved and specifically which players need to be brought into the mix offensively. He'll also pick up the scoring lulls himself and has an uncanny ability of getting to the foul line when his team needs to quiet a hostile crowd or get an easy two points. And once Billups is at the freebie line ... he's deadly.

Billups' numbers show he's a model of consistency. Over the last seven seasons his scoring average has only fluctuated between 16.2 to 18.5 and his assists over the last six seasons between 5.7 to 8.6 per game. You know what you are going to get from Billups and because of that he can at times fly under the radar.

Negatives / What needs to improve: The knock on Billups has supposedly been that he wears down as the season progresses. Let's take a look:

I don't see the drop off in his play ... especially when you consider his playoff numbers.

The only real knock that I found myself having with Billups was his tendency to get a little shot happy at times. But I feel that pointing this out is like pointing out that you only got 8'' television screens in your new Hummer versus 12'' ones.

Outlook for 2009-10 season: Billups will be going back to his old #1 jersey next season and hanging up his tribute to John Elway #7 one (glad I was able to snag one of those last year!)

Billups' age didn't seem to play a factor for him last season ... we even saw him throw down a vintage two-handed dunk, much to the job of his teammates! Comparatively Jason Kidd was still putting up  his career average numbers when he was 32-34 years-old with the New Jersey Nets. So, I don't see age playing a negative role for Billups next season as I expect him to again put up his career average type numbers. But to guard against fatigue the Nuggets have brought in Ty Lawson, who should be capable of eating up some minutes at the point guard spot and allow Denver to speed up the game when he's on the floor.

I thought of the Nuggets team last year as Billups playing the role of the leader and Melo playing the role of the star. It's a nice complementary role that allows each guy to co-exist and flourish. There will be nights when Billups takes over as the star ... just as Melo continues to carve out his leadership status with the team.

If the Nuggets are going to challenge for the Western Conference and NBA titles next season then Billups will again have to play a major role with the team. To have Billups throughout the offseason and training camp will benefit the Nuggets even more.

But the key to having Billups is that he helps make the Nuggets a complete team as Denver's true point guard.