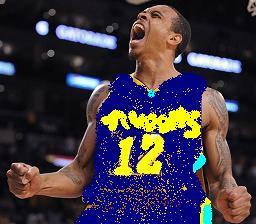 As soon as the Nuggets lost the Western Conference Finals, talk began of what Denver needed to do to get back to the WCFs to face the Los Angeles Lakers. After listening to an interesting podcast and looking over the numbers myself ... I'm not so sure the Lakers are a guarantee to make it as far again next season.

Let's examine the Lakers landscape and see how their salary cap issues may benefit the Nuggets in a variet of ways.

(Yes, I'm a paint professional ... (AP Photo/Mark J. Terrill) and doctored by yours truly.) But, you have to agree that Brown would look good in a Nuggets uniform ...

For the upcoming 2009-10 season the NBA salary cap is estimated to be between $69-$71 million and the Lakers team salary situation looks like this:

In order for the Lakers to compete for the title again next season they must secure two key free agents: Lamar Odom and Trevor Ariza (we all know how important each player was in the WCFs.) L.A. owns the "Bird Rights" to each player and that means they can re-sign each guy to any dollar amount, but it doesn't save them from the luxury tax.

Lamar Odom made $11.4 million this season. He has stated that he wants to be back in Los Angeles and wants to play for a city near the beach. It's believed that he'll give the Lakers a discount, but honestly how much of a pay cut will he be willing to take knowing that he's L.A.'s second or third best player?

Trevor Ariza played for a very reasonable salary of $2.91 million this season and he'll just be turning 24 years-old at the end of this month (June 30th). Ariza is due for a pretty big raise as his game began to flourish in the playoffs for Los Angeles.

Mbenga made $854,957 this season and is a decent third or fourth center off the bench. D.J. will be entering his 6th NBA season and his minimum salary scale will be $1.03 million if he inks the popular veterans minimum next year.

Shannon Brown made $797,581 this season and should be scheduled for a bit of a raise. The kid has a ton of athleticism and has shown some flashes of putting together a legitimate NBA game. After averaging 9.9 minutes during the regular season, Brown has been leaned on just a bit more in the playoffs.

Brown's numbers have dipped as the playoffs have worn on, but perhaps it's because his minutes have dipped. If the Lakers and Phil Jackson are committed to this kid I think he'd be getting some more burn. And with Fisher and Farmar under contract next season, Brown could be the odd man out.

So, the Lakers have some major decisions to make in the offseason, as do the Nuggets. L.A. will be paying the luxury tax next year unless they can come up with some ridiculous salary dump trades a la Marcus Camby to the Clippers that Denver pulled off. But remember, every team must have a minimum of 14 players under contract, according to the current Collective Bargaining Agreement with the NBA Player's Association as specified here.

The Nuggets are not alone in their quandary of trying to solve the NBA's salary cap while also trying to compete for a title.

Let's just assume for a minute that L.A. is able to resign both Ariza and Odom. I would say Ariza is somewhat of a Raja Bell-esque player. He can knock down the three, defend pretty well, and is not expected to carry the load on offense. Ariza is younger and more athletic than Bell and should command a bit more than the $5.2 million Bell is scheduled to make next season. Let's say L.A. inks him to a $6 million per year deal.

As for Odom. He's sort of in the Boris Diaw and Josh Smith player category. Tall, athletic, can play inside-and-outside, but he comes off the bench for L.A. Diaw makes $9 million next year and Smith is scheduled to make $10.8 million. Odom is better than Diaw and is arguably better than Smith. To stay with L.A. Odom would probably have to take less money than the $11.4 million he made last season, but there is no reason for him to do so in today's NBA landscape. And if Odom does take a paycut to remain a Laker that'll mean making less money than Bryant, Gasol, and Bynum (which he did this season.) But from Odom's standpoint he's proved to be more valuable than Bynum and just as important as Gasol so why should he make less than them?

Let's just assume that Odom is true to his word and signs a deal to remain in L.A. with a salary starting in the $8 million range. That'll mean L.A. would have 10 players under contract with Ariza and Odom back in the fold and a total team salary of roughly $88.04 million with 4 roster spots still to fill. Again let's assume that L.A. inks 4 players to roughly $1 million deals ... that'll push their 14 player payroll to roughly $92.04 million for the 2009-10 season.

Let's assume the league salary cap comes in at $70 million ... that means L.A. will be $22.04 million over the cap and will owe $44.08 million in NBA luxury tax. There is just no conceivable way I see L.A. being able to fork out that kind of cash ... especially if they do end up winning the title (why pay so much when you already won the whole thing?)

I wrote this so that Nuggets fans don't feel so alone with the sticky salary cap situation facing the team this offseason. The Nuggets have their entire core coming back and face questions about which bench players should be retained and which should be shown the door. It could be worse ... just look at the Lakers offseason questions. 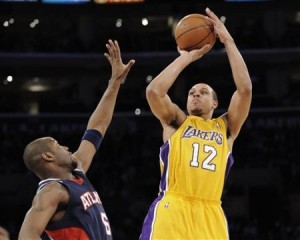 Post Script: I also wrote this in the hopes of Denver signing one of my most coveted young point guards (Shannon Brown). I've been a fan of Brown's since his days at Michigan State and I think his style of play would be great for the Nuggets. We've all been discussing who the Nuggets should bring in to be the heir-apparent for Chauncey Billups and you can throw my vote in Shannon Brown's pot.

Just like Billups to start his career, Brown, in his 3rd NBA season, has bounced around the league with stops in Cleveland, Chicago, Charlotte, and Los Angeles. Just like Billups ... Brown is starting to show signs of an NBA life with his fourth team, (the Lakers) for Billups that fourth team was with the Timberwolves. The key with Billups was that fifth team ... (I'm not counting the Magic because Billups never played a game with them) the Detroit Pistons. The Nuggets have a shot to be Brown's fifth team and allow Denver to be his Detroit.

(all NBA salary information from Hoopshype.com)