"Mike Fisher has the news that Josh Howard has said he will play on Saturday."

If Josh Howard does in fact play Saturday, as he is saying he will, you have to give the advantage to the Nuggets.

Howard had a good opening game playing 33 minutes, shooting 7-16 from the floor (0-4 from deep, 1-2 from the foul line) for 15 points, but his injury to his "good ankle" during the contest made him a non-factor for the rest of this series.

Howard was only able to play 6 minutes in game two and finished with 0 points on 0-3 shooting. You could see on his jumpers that he was having trouble getting any lift as the ball hit the front of the rim. Howard came down hard on his feet under the hoop after trying to defend a layup and his night was done.

I just don't see a guy who, "needs surgery on his left ankle after the season." And has a right ankle that, "hurts worse right now" being anything other than the Matador's cape against Carmelo Anthony. 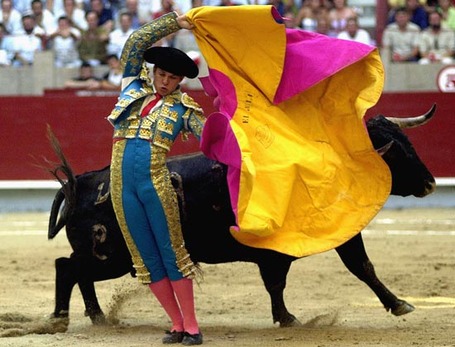 If I'm Rick Carlisle I hand the small forward position to James Singleton for Game Three. The 6'8'' and 230 pound Singleton has the size to match up with Melo (listed 6'8'' and 230 lbs.) and has proved to be a capable defender ... even better he has two perfectly good ankles.

Singleton saw some extended action in game two when Howard went down. He played 14 minutes and scored 5 points and hit 1 of his 2 outside shots. I'm not saying Singleton can or will be able to hang with Melo either, but having three full days off just does is not adequate time to heal two bum wheels.

If Howard marches out onto the floor tomorrow he may give the home crowd a bit of a spark, but I believe Melo will have his way and the Smilin' Assassin will be on full display.