What time is it? Game Time!

Today could not have gotten here any faster! After I posted my preview the conversation took off. I stayed up well past my normal bedtime to chat with fellow Nuggets fans and some knowledgeable Lakers fans.

Opinions have been tossed around, predictions have been made, your local Nuggets blogger has been asked if he's smoking crack, and everyone is ready for the game to be played.

I thought about spewing lots of stats, but what will that matter? I've determined from all the reading that I've been doing that everything can basically be thrown out the window as these two teams present unique challenges to each other. But if you are stat mad then I'll offer you this nugget (get it ... Nugget! Wow, I'm lame): 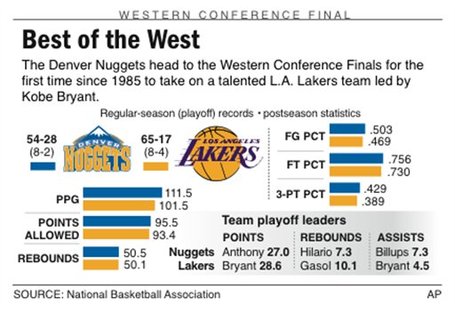 Like I've stated above ... let's just tip this thing off now! We are less than 7 hours away from tipoff tonight and I'll offer my usual CB7 inspired keys to victory for the Nuggets:

I don't know how things will go tonight. I've thrown up a few times already into my trash can. I'm a nervous wreck and just want to see the Nuggets play and play well. Let's get this thing going ... GAME TIME!

Post Script: In the game thread tonight ... please stay focused on the game at hand. Do not feed the trolls Nuggets Nation (if they are around) and just root for your Nuggets. If you want to argue with a Nuggets fan or Lakers fan ... please do so in a respectful manner. Warnings and Bans will be handed out for those who do not cooperate. Let's have a good series and a great start tonight! Go Nuggets!!