When I'm driving home from the Denver Tech(nical) Center to my home in Downtown Denver I like to tune into the local sports talk stations and sometimes even call in to offer my two cents ... actually what I'd like to do on my drive home is bash my car into the rear bumper of the person in front of me and go down in a blaze of glory after that a la Grand Theft Auto ... instead I try to keep the road rage under wraps by listening to the local yahoos argue about sports.

My radio is usually tuned to 104.3 FM the Fan. What I have grown tired of hearing about is JAY CUTLER AND JOSH McDANIELS! I realize Denver is a Broncos town and I'm a Broncos fan, but THE NUGGETS HAVE 50 WINS!

They are having arguably their finest season ever. This is the fastest the franchise has ever reached 50 wins and I all I hear about it Cutler!

So, when I was moving couches yesterday in and out of my apartment I was relieved when I checked my phone to find that Cutler had been traded. The only problem now is that we are going to have to endure talk of, "Was it the right deal?" for months if not years to come.

I wrote this to a friend yesterday via email about Cutler ...

Shannon Sharpe said (head coach Mike) Shanahan wanted to trade him when he took over and it made Sharpe mad and he went out and channeled that anger into hard work and wanting to prove Shanny wrong. Now he's going to be in the Hall of Fame someday soon after revolutionizing the tight end position.

Cutler had the same thing happen here and he ran away from it instead of facing it like a man and taking on the challenge of proving McDaniels wrong. I don't want a QB who runs from anything except 300 lb nose tackles!

I truly believe this and do not regret seeing Cutler go.

As Nuggets fans we know Melo faced this same dilemma this past offseason. The Nuggets' front office assured Melo he was not going anywhere. And Melo faced a crossroads ... the same one that Sharpe and Cutler faced.

Melo chose Sharpe's path. He saw the team around him change overnight when Camby was shipped to the Clippers and instead of demanding a trade, Melo has faced the challenge.

Carmelo was given help with the trade of isolation-Allen for Chauncey Billups and the Nuggets have been steady inside with two gigantic gambles.

The moves have paid off for the Nuggets thus far and this team is bringing hope to a city that suddenly finds most of its franchises rebuilding.

The Nuggets are Denver's best hope to bring home a championship. It seems rather far fetched when you think about it ... especially with the Lakers, Cavs, Celtics, Magic, and Spurs getting all the talk as the league's elite teams. But that is a good thing. Denver is sort of flying under the radar Nationally and they are completely inexperienced in the playoffs as a team ... at least at knowing how to win after game 82. But this is not the Nuggets of the past ... this team plays defense, shares the ball when they are at their best, and knows how to finish in crunch time with Melo and Billups providing most of the big shots.

But I wish I could hear more from the local media about the Nuggets. About all anyone wants to talk about is whether or not Jay Cutler will post the same numbers in the Windy City as he did in Denver this past season.

For me ... I'd much rather focus my attention on a team that is enjoying playing the game. The Nuggets' chemistry is undeniable. From player introduction rituals to high fiving and chest bumping on the court, you can tell these guys enjoy playing with each other.

So, it was no surprise last night when I was at the game, that the kid seated in front of me chose to wear a makeshift Kyle Orton jersey out of his Carmelo Anthony jersey.

Melo has shown he is up for the challenge and I can't think of a better example for Orton to follow as he rides into town. 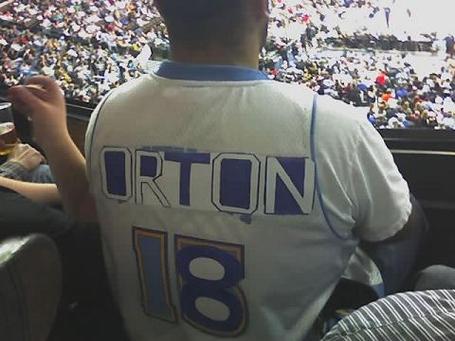