The Nuggets have adopted a nickname throughout the blogosphere as "The Thuggets." Some folks will try to argue that the Nuggets have cleaned up their image. Whether it be Melo shaving off his stereotyped cornrows or the trading of Allen Iverson to Detroit (who gets banned from casinos?) ... some Nuggets fans will tell you that the team no longer has that bad boy mentality.

But this post-season the more I hear "the Thuggets" thrown around, the more I like it. For me it shows that teams are perhaps a bit uneasy when they face off against Kenyon Martin and Company.

What's wrong with playing a more physical brand of basketball? It is sort of passé in the NBA these days, what with all the rules basically banning defenders from breathing on offensive players. Call me early-1990s old school if you want to, but I like not giving guys open layups without sending them to the floor or bodying a guy when it's necessary. Don't get me wrong, I'm not rooting for the Nuggets to injure the opposition or to result to just hacking guys all the time, but there is nothing wrong with letting your opponent know things wont be easy if they try to come inside.

What Denver must do to win tonight:

I have no idea what to expect tonight. Part of me is confident that the Nuggets will come out and play a great game and another part of me is nervous that the Hornets gained much needed confidence with their win. I know the crowd will be fired up and my hope is that Carmelo will look into the stands and see all the yellow t-shirts and assume he's just playing in Denver in front of Melo's Yellows. 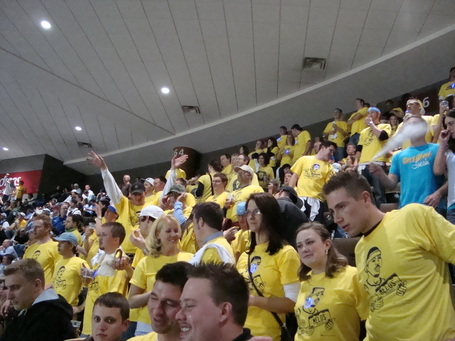